Unfortunately we have just discovered some bad news. Many of you will remember Steve Yensen, the moderator of the Panda section. He was in poor health last year after suffering from heart failure.

He passed away on January 13th. Taken from the family notices section of the Nottingham Evening News. Terrible. I just wanted to let everyone know.

"YENSEN Stephen. Suddenly but peacefully on January 13th 2006 in Grimsby, aged 53 years, late of Nottingham. Beloved husband of the late Penny. Dearly loved son of Bet and the late Walt. Loving brother of Ang and brother-in-law of Pete. Treasured uncle of Haydn and a great friend to many, who will be greatly missed by all. Service to be held at Grimsby Crematorium on Friday 20th January 2006 at 3.00pm. Stephen is now resting at Mashfords Funeral Service, Cleethorpes, where floral tributes may be sent." 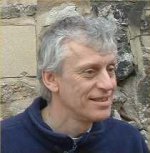 dont know what to say, but
C

my thoughts are with his family and his pandas.

by Steve i hope there is some where we go after, and that you and penny are reunited

Location
Under The Hill

may I add my condolences as well.

I've been wondering why he'd not been on in so long and just thought he wasn't well again.

It really is sad. He was desperately unhappy since Penny died. Maybe they are together now?
L

GTI Till I die

My thoughts are with his family.

Best wishes wherever he is now
T

I really do hope him and Penny are re-united somewhere. Such a shame I never got to know him, he looked a happy and interesting fella from that photo, i hope that quick assessment does him justice

I'm shocked. RIP Steve and Penny. FF and especially the Panda section have lost a well respected and well liked member. May he rest in peace.

Oh no, such sad news. Steve is a great loss, he really was one of the good guys :worship: He was so brave when Penny died to come on here to let us know and now he's gone too

Owner of Gemma the Panda

I don't know what to say, but God bless.

Him and his wife and all his beagles, they are all together in heaven, panda outside, god bless steve, a true legend

53 is too young to die. Condolences to his family.

I remember Steve, nice fella, may he rest in peace.

As a newbie here of a few months I had not met him but as you get older you start to realise that we are not as indistructable as we think and for those of us that have constant illness very worrying. By your comments he had lost his wife Penny and this no doubt didnt help the situation for him as when you are with a loved one for many many years life will I think not be so rosy for the one thats suddenly left alone I would imagine the pain thats felt is horrific and the feeling of emptyness unbearable so to Steve and his wife Penny R.I.P. now that you are again reunited God Bless you both

RIP Steve
You must log in or register to reply here.

We made Taiwanese news...