(Note this is different from the OC Sensor (Occupant Classification Sensor) problem- same AIRBAG FAILURE warning light but comes on when someone sits on, gets up or moves about in the passenger seat and no amount of twiddling with the under seat wiring fixes it). See Stilo Guides for how to fix that

THE PROBLEM - you move either seat and the AIRBAG FAILURE message and red warning light comes on, often followed by the message STOP ENGINE just for fun. Twiddling with the wiring under the seats gives a temporary cure but just when you were starting to relax- BING- AIRBAG FAILURE

The things we know
The symptoms-
It seems to happen when the car is around 2 years old.
Why? What happens at 2 years old that wasn’t happening before?

You twiddle with the wiring under the seat and it eventually goes off on the next restart.
Why? What does that do? The connector isn’t coming apart- the two parts to the connector are locked together. The connector has passed quality checks for airbag systems. The electrical connectors are made of good quality non corrosive materials. It can’t be the connectors

Ok so it’s the wiring then, all that moving about etc
But that doesn’t make sense either. Wiring breaks, goes resistive, shorts, open circuits etc. It doesn’t fix itself by waggling it about. So what the heck? It’s most definitely something to do with the wiring and the connectors – but what?

What happens to cars after two years of use? Answer- Wear and corrosion.
But the only wear between the male and female connectors is caused by people pulling them apart and reconnecting them and that won’t be significant. So where is the wear or corrosion taking place?
View attachment STILOWR1.BMP
Here, where each wire connects to its terminal in the connector. The terminal is just crimped to the wire and it’s dissimilar metals so corrosion will take place over time and eventually the electrical connection deteriorates enough to cause extra resistance through poor contact and a movement of the wire is enough to trigger an airbag warning. It’s low voltage and very sensitive to resistance changes

So what can be done? Some chop wires and put in different connectors or solder the wires together but that’s really very risky with life saving safety systems.

So what’s the answer?
If that connection was as good as new, then there would be no problems. The answer is to etch off the surface corrosion between the wire and the connector with a proper electrical contact cleaner.
NB NOT WD40 AND SUCH. WE’RE NOT TRYING TO WASH OR LUBRICATE.
I MEAN PROPER ELECTRICAL CONTACT CLEANER that will take off the corrosion and clean the contact areas. ELECTRICAL CONTACT CLEANER is obtainable from Halfords or Maplins. Around £4 a can 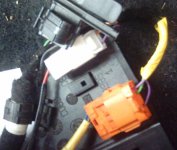 Driver's side shown here, passenger side has a third connector, a grey one, for the Occupant Classification Sensor. 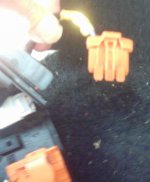 Now it’s no good just wildly spraying the connectors, you need to gain access to the rear of the orange airbag connectors, that’s where the problem is. The orange connectors look like they’re sealed for life but you can flip the back end away on both the female and male connectors to gain easy access. 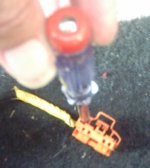 Just use a small screwdriver to release the two small catches here, hold onto one side catch while you release the other and the end can be flipped out. The female connector has two similar small catches to flip the end off that one too. DON’T TRY TO PULL THE WIRES OUT! 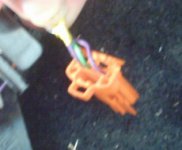 Here's the connector with the end flipped out. Now you have access to where the problem is - the ends of the wires
Simply spray some electrical contact cleaner into the wire ends- you won’t need a lot. Give it a little time to do its work, a few minutes at least then spray again to blow out sediment. Let it dry, it won’t take long. Then reconnect. Do both sides- passenger and driver's side

What do Fiat do?
I believe they have replaced the loom ( a bit drastic) and connectors (nothing wrong with the connectors) and secure the cable and wires differently to reduce strain at the connector (helps but there's still a dodgy connection there) .


Is this a permanent cure then?
Nothing’s permanent on a car, the whole lot is going to be a pile of rust in 20 years time so it’s all a matter of time. Mines doing well, from airbag warnings going off every week, I haven’t had a peep out of it in 3 months and that's just using the cleaner, not even taping up the wiring

Will it do any harm?
No. Contact cleaner only removes the microscopic very top layer of corrosion. It might be another two years or more before anything needs to be done again and let’s face it, it’s a pretty simple operation to do whereas waggling wires and disconnecting and reconnecting the airbag connectors will just make it worse over time.