Guide Gallery Discussion
Solutions to a problem you didn’t know you had. Many Stilo owners will have had to change their brake light switch through ASR warning lights and brake lights not working or brake lights staying on sort of problems but for those that haven’t then I feel you should be forewarned of something that may be coming your way if it hasn’t already.

Imagine the scene, I’m driving along a dual carriageway and a young lass draws up along side and is pointing and mouthing something unintelligibly like “I thought my bum looked big enough until I saw the backside of your Stilo”. At least I think that’s what she says and so I smile sweetly, give her a thumbs up and say back something which probably looks like “Yes you can get a full wax, back and crack down the road for £45 don’t you know” 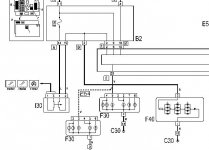 Now I hear that new brake light switches are better designed and more robust than the originals, the operating point isn’t right at the top and therefore over sensitive and the switch isn’t so affected if you happen to trip your foot underneath the brake pedal. (The original would often reset it’s brake light operating point just by a simple act of pulling up on the brake pedal or catching your foot underneath it. Not good).

So I’d advise everybody to check out the operation of their brake lights, not by asking someone to check as you won’t know what’s happening, but by reflections and watching what happens with your own foot operating the brake pedal. If you’re getting odd things happening too then it’s time to replace the brake light switch before someone reshapes your rear end

New switches are £5 from Fiat. Not too difficult to fit but I’d advise practising shuffling a deck of cards with one hand in the dark upside down first 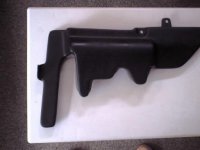 Remove the sound deadening over foot panel and throw it away if you haven’t already done so, more room for your feet and you can hear the indicators as well then.

Switch is a bayonet, light bulb type, half turn to remove. Connector to it is a pull up release catch which is where you’ll need the fingers of steel and origami in the dark skills

It's fiddly and requires some good control one handed under the dash. Get the driver's seat as far back as it will go. The switch is right above the brake pedal arm and, at first, looks like a right pig to do as you can only just get your fingers on it and have to go almost toally by feel but, like a light bulb, just a half twist of the switch and it's out, push it upwards to release it from it's securing bracket. i did it so many times i can do it in seconds now so it's not difficult but a bit of a strain to get to so get comfy

Once it's released you have a bit of slack in the wiring so you can move the switch over the top for a bit more slack so you can get to the electrical connector. This is just a raise release catch on the side of the connector and pull off, again tricky because yoi could only use one hand on it but, once the connector is off, the switch is out.
Next page: Testing the switch >
Reactions: 12[X], windtunnel, Frantic fiat fanatic and 9 others
Share:
Facebook Twitter Reddit Pinterest Tumblr WhatsApp Email Share Link