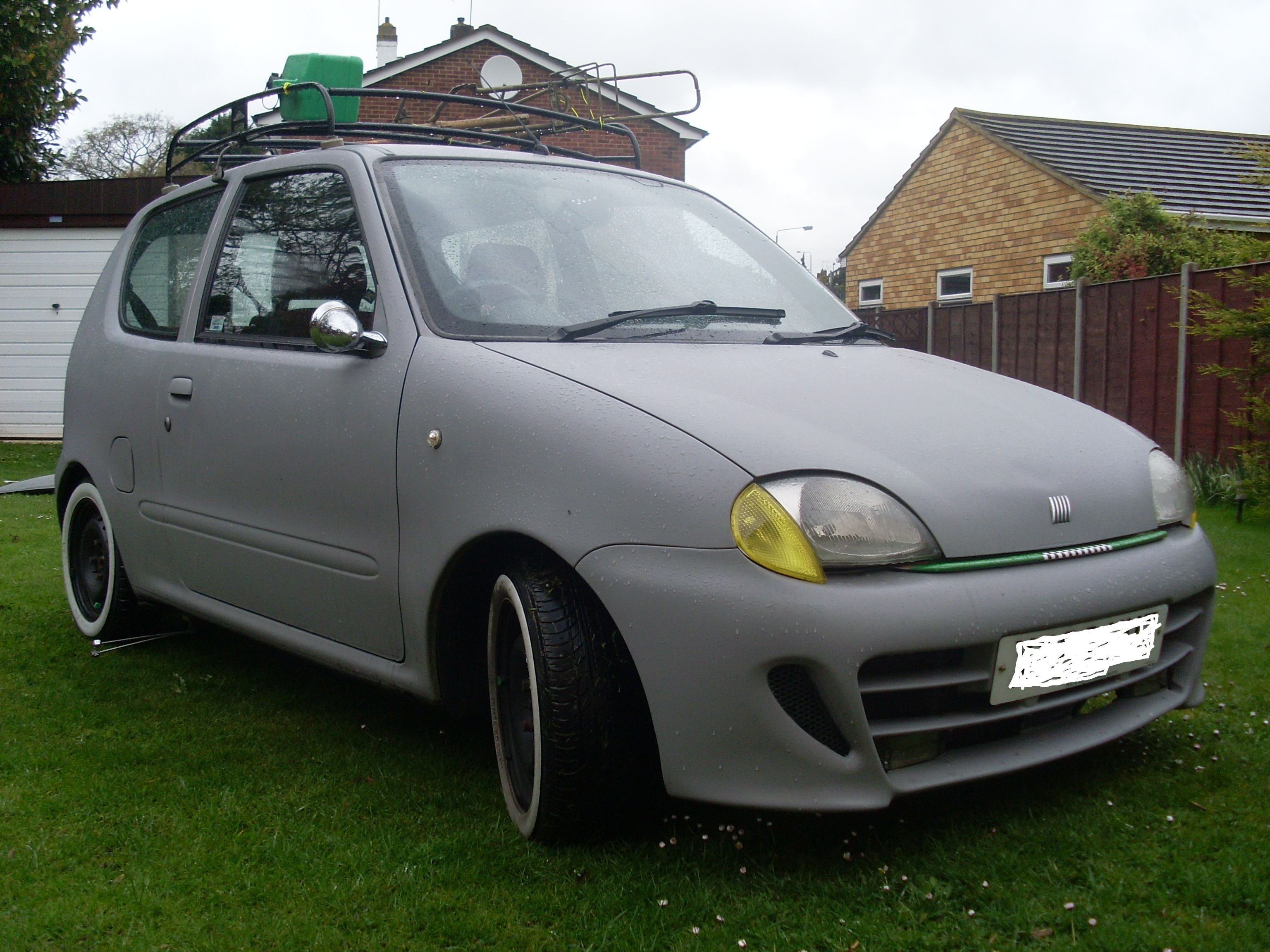 Seicento 'A little break from the norm' 1.1 Sporting

So to start, I previously made a thread before, but it was closed etc. I have been on quite a journey with the little seicento sporting.
so I will start from the beginning, fresh.

I purchased the car roughly a year ago. Within an hour of owning the clutch cable went, so the car was offroad for a few days then. A months after that, the alternator failed lol so a new bosch battery and alternator was fitted. Since that it has also had a new rocker cover gasket and new leads and plugs etc.

Ok so from the beginning, this is how it looked: i didnt really like the orange indicators etc so i purchased some clear ones: the car had some pretty bad dents, mostly being the biggest one in the bonnet: i think you can just about see it here.

I did a lot of reasearch on here about springs etc, i was firstly on the lookout for coilovers but I managed to get some 50/60mm springs off ebay for £20 lol

had them fitted a few months later and this is how she sat: around this sorta time, i started to want to go down a rat look stage (not the sorta wrecked rat look, but the old skool 50s rat look)

I purchased a cherry bomb exhaust - I knew a few cinqs etc but no seis??
so I called Chris from Imagination Creations and he set to work. It was a centre exit made exhaust and obviously it was cut throught the back bumper: one of the very later mods I actually did was debadge it lol looked so much nicer without them!!

so from here i was pretty much full on rat mode - so i sanded the car right back, filled all the dents etc and painted the car in grey primer: I them purchased some 13" steel wheels and rully refurbed them in matte grey with 'atlas' whitewall tyre trims: as every good rat car needs is a roof rack, so i custom built one frm other bits of rack, wasnt really that difficult, just a case of making brackets and shortening tubes etc: I also got some very positive feedback at a classic car show i went to which was nice, and upto a few months ago this is how she sat: Then after a few little bits and pieces here and there, I lost all love for the car in its current state and wanted a totally different look to the car. so i stopped for a few months and srating to get the car running nice and being sensible (growing up eh??) and ripped off the silly useless chrome mirrors and replaced with my OEM ones (I sprayed them gloss black)
refurbed my Cinq alloys and sprayed them gloss black. I had a spare bonnet with was taken back to bare metal had the bnnet welded up and smoothed: sprayed in filler primer and red oxide primer allover and given a nce over with hammerite and painted gloss black to match the wheels etc and fund some old tal light tinting spray and gave my old indicator lenses a going over.
and this is the final result: so there it is, a few things still need changing ie the stickers need taking off, and the green trim needs painting (im thinking pink lol)

so yeah, the car is runing really nicely,for me its all about having a decent runner bout now, the brakes are being done in the next few months too and the smoked indicator lenses will be replaced with proper manufactored built ones as their is that grey line with smked indicator lol

Thanks ever so much.
Click to expand...
OP
OP

can anyone recommend what new brakes i shuld get? cheers

There you go.
OP
OP

ok so car is being prepped for a new respray - going for a darker metallic silver (i love silver cars lol) brakes are to be changed in the next month - wanna go for a gt brake conversion (unfortuantely missed the set for sale on here but didnt have the cash lol) then some engine tweaks lol but brakes need sorting first.
i purchased a new cd player:
http://www.ebay.co.uk/itm/261033172976?ssPageName=STRK:MEWNX:IT&_trksid=p3984.m1439.l2649

thought was a bargain, not majorly into the whole ICE thing just needed one ASAP so this should be here within the week.
OP
OP

ok, so i started to paint the car today, have done a few light coats - good thing is my orginal paint choice was primer so not much prep was needed lol, atm it needs loads more sanding etc, then a few more coats etc etc
but heres how it looks atm, i went for a slightly darker shade of standard sei grigio and i really like it. this is my second time painting a car so taking my time.
i will be spraying my alloys baby blue when finished too just been and sourced myself one of those cinq 899cc throttle body bobs, so will start to create my own induction kit soon, tax at the end of this month so money going on that lol
Last edited: Jul 12, 2012

Are you still aiming for a Rat look ?
OP
OP

not really, dont worry i havent nowhere near finished painting etc, im having a little learning process with it as i go, so it will be a slow process - unfortuantely i cant afford a pro paintjob, so i thought id have a stab at it

Are you using an aerosol or gun ? Btw Silver is one of the worst colours !
OP
OP

roller lol :slayer::devil: purely because i have seen some very decent jobs with lots of patience etc, and i have had lots of practise roller painting lol im sanding every 2-3 coats and have been doing my research, so i know it wont be an amazing job, i know i will be pleased that i put alot of hard work in, its changed lots since that pic, and already looks and even colour - like noo obvious marks etc so its coming along nicely and its cost just under £20!!! lol

Your not the first person to do it that way, its popular in the states too.
OP
OP


cinquecento painter said:
Your not the first person to do it that way, its popular in the states too.
Click to expand...


yeah i kno, ive seen it done so much lol i have so many hot rod mates who have done it, so i thought id give it a bash lol

I saw this car at Wheels Day at Aldershot show a few months back.
I've gotta say the rat look didnt turn me on, but it looks awesome with the black cinq wheels, grey with black bonnet. Primer grey is under rated!

Not sure about the baby blue wheels? but give it a go!
OP
OP

purf said:
I saw this car at Wheels Day at Aldershot show a few months back.
I've gotta say the rat look didnt turn me on, but it looks awesome with the black cinq wheels, grey with black bonnet. Primer grey is under rated!

Not sure about the baby blue wheels? but give it a go!
Click to expand...


thanks man! yeah i liked it like that, but after a while, it looked so 'ratty' i couldnt feel pride in it - like yu do when you have a real nice shiny car (if that makes sense)

I know what you mean - you'v gotta have pride in your ride!

slowly, only because im taking my time lol i sort of rushed the primer before, so now i wanna take it slow, i love the metallic silver i chose lol this is my sort of inspuration for blue wheels:

Doesn't own a fiat..

its spot on i think lol so major updates: car should be finished pretty much wednesday! still gtta sand some more, then a final polish, have been reading detailing websites in order to get this gleaming!! watch this space
OP
OP

i want to paint my wheel nut bolts, but obviously they're rusty as, is it safe to just sand them lightly , or whats the deal lol cheers

Got a pic of that van on my phone: They used it to go to Screwfix.

Well, it is still a van.
OP
OP

if i could get my sei as clean looking as that id be happy lol work starts 2moro,
You must log in or register to reply here.