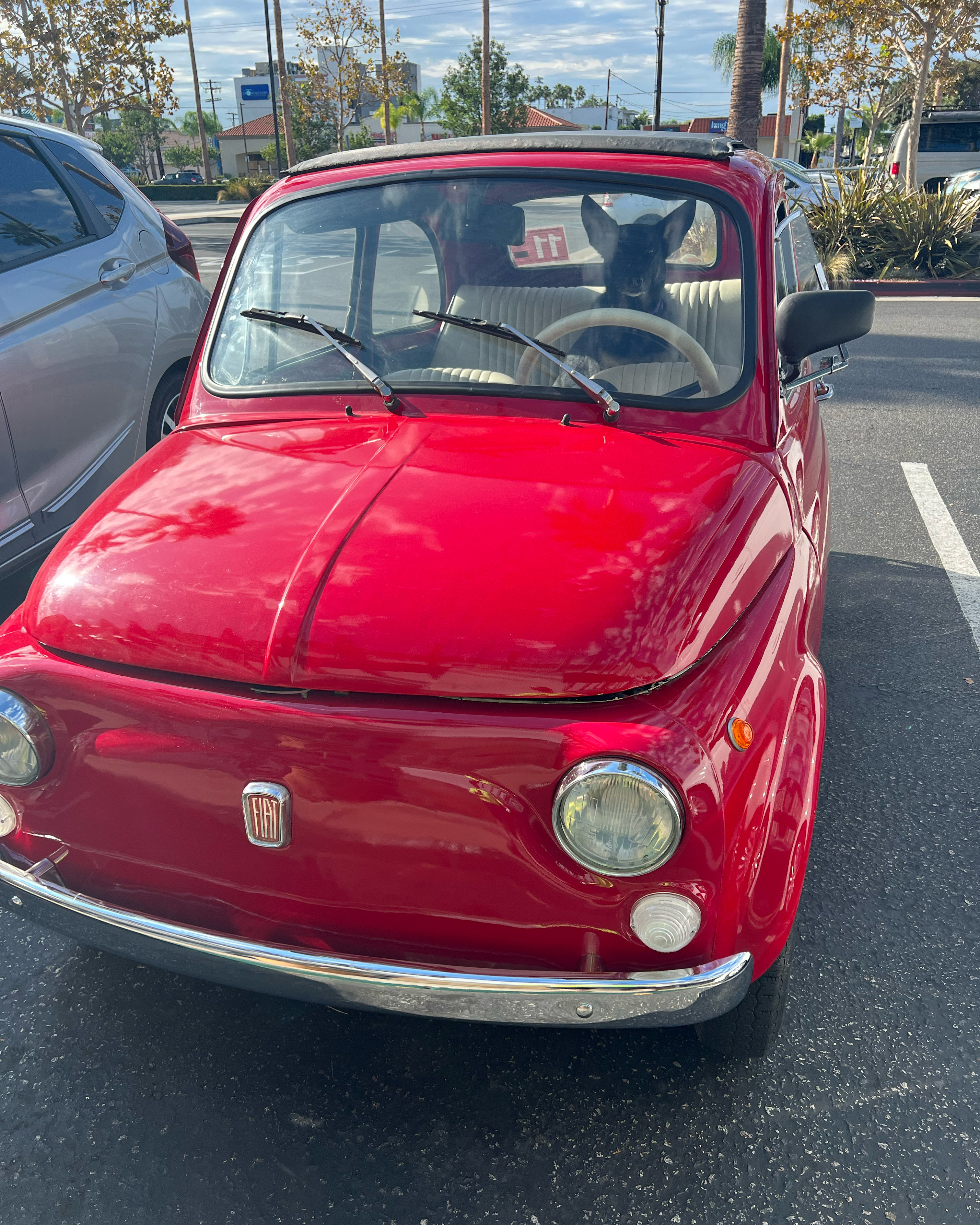 I have taken on the crazy task of trying to stuff a Ducati 1100 air cooled L-Twin engine in the back of my 1974 Fiat 500R, and solving all the challenges that will arise because of it!
Overview Updates (2) Gallery Discussion

Hello everyone! As the title suggests, I have decided to build a Ducati powered Fiat 500!

I have restored a couple classic American cars, some motorcycles, and have designed and built a handful of Formula SAE cars in college, but I've always wanted to build my own motorcycle powered road car.

After a decade of working at one of the largest Spacecraft companies in California, I decided to take a break and try to make this dream a reality. The car needed to be simple, lightweight, relatively cheap, and older than 1975 (California smog requirements). I have a buddy that did this with an old Honda S600, and another with a Fiat 850 spider, but I wanted to do something a bit less roadster-y. Then, as the wife and I were honeymooning in Italy, I saw the answer: the old Cinquecento.

There seems to be lots of motorcycle powered 500s for hill climbing, and Z-Cars is one of the most popular swaps out there with their Suzuki Hayabusa swapped "Fiabusa" (they also make a Subaru swapped "Fubaru"), but I wanted to keep the motor air cooled (no big radiator up front) and Italian. After a bit of research, I decided to go with my favorite motorcycle engine, a Ducati 1100. The last of the big, air cooled, dry clutch L-Twins. How hilariously adorable would this car be with that noise coming out of it?

I spent a few months looking for the perfect car - something that was driveable, in decent shape, but not too nice, so I could save money up front and put it toward the swap. I ended up with a clean-ish 1974 Fiat 500 R with about 26,000 km on the clock that had been imported into the states a few years prior. The body was in pretty good shape until a strap broke towing it home resulting in a head on collision with the trailer. I minimally repaired the damaged area so I could turn the wheels full lock again, then drove it around a few months until I got the car registered.

Now that the car is legal, it's time to begin the project!

Hey Everyone - I wanted to give a quick Powertrain Update to go through my process of engine and differential selection!


Although I loved the idea of using the Ducati 1100 engine, I did look at a few other options including an electric motor and a much more powerful, water cooled Ducati 1098 engine. I even looked at a Moto Guzzi engine using a VW Beatle transaxle since Fiat had considered using Moto Guzzi on the 500s once upon a time, but that engine isn't very fast revving and I decided I really wanted sequential shifting! My first thought was to look at how these different options would make the car accelerate - so I made a "Tractive Force" plot, showing the vehicle's acceleration (in G) for a given speed in each gear. This is also a helpful tool for choosing my final drive. 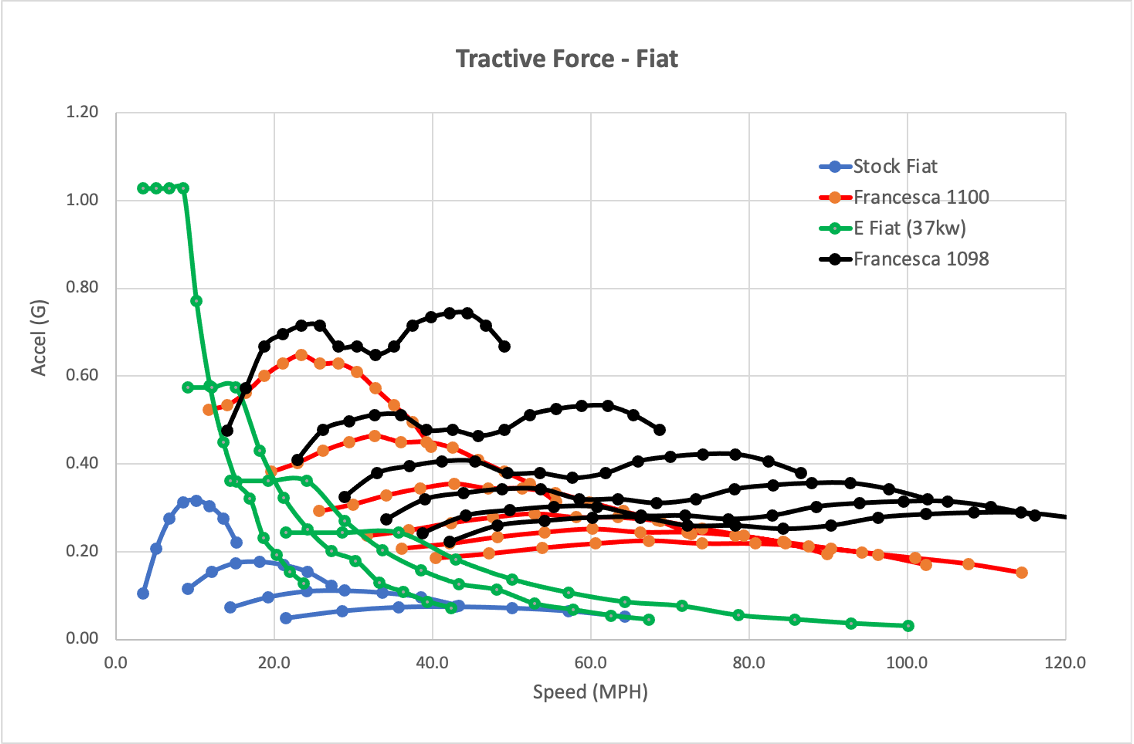 I plotted the stock Fiat 500, just to remind myself of what I was comparing everything to. I was actually seriously considering an electric option similar to what Electric Classic Cars offer, but I decided it was going to be too slow for my liking. Maybe I can do a more custom electric option for a future Fiat 500 when I have more time to figure out how electrons work. The Ducati 1098 option would definitely be the fastest option of the bunch, but this power curve isn't nearly as smooth, and I really don't need the car to be that fast, even if I were to play with different gearing. Plus, I really didn't want to package a water-cooling system. The air-cooled Ducati 1100 seemed like the right balance between power and drivability. I'll need to add a couple of fans and open the rear of the car to get some good flow over the heads and oil cooler, but rejecting heat through oil coolers in the engine compartment should be much easier than rejecting heat through a radiator. This will be future me's problem.

Now that I've fixated on a particular engine, I need to figure out how I'm going to get this power to the ground, and ideally, go backwards. In the past, I've made a handful of chain-drive differentials but I no longer have access to free CNCs. You can buy complete chain diffs but they still require you to make custom diff mounts. These would also require a separate reverse solution, which I could solve with an electric motor or a reversing gearbox. I could also look at using a small differential from a car or ATV, but these options would just take up too much space, and since I'm trying to keep the back seat (a requirement from our dog, Peach), I really need to be space conscious. Below shows the Z-Car's solution - I'm trying to do the same in half the space! 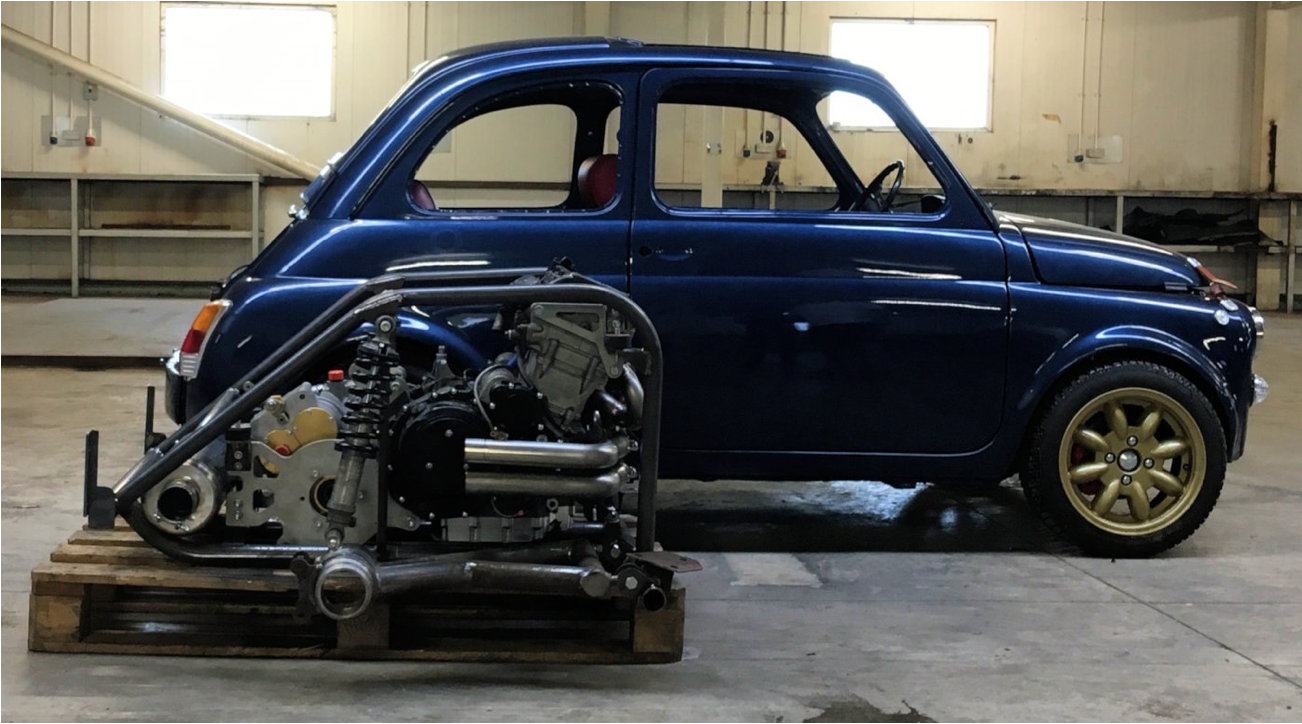 So, I started looking for an off the shelf differential (not a spool rear end for dune buggies) that included a reverse. There seemed to be 2 players in this game: Quaife and Elite.

Quaife is a good brand, I've used their diffs before, and they have a pretty smart design that doesn't really need to be serviced; however, with this configuration, the engine needs to be mounted in-line with the diff, as it would be in the motorcycle. There are lots of these units out in the wild, including the Z-Car and my buddy's Fiat, but they all have much more space available. To package this, I'd have to run the diff in front of the engine, and squeeze everything together to give me as equal length axles as possible, reducing CV angls, while still fitting the engine in the car. This configuration gives me lots of room in the engine bay but it wouldn't be the most aesthetically appealing to me as it hides the engine’s exposed belts and dry clutch. It also would be more challenging to package a symmetric rear suspension.

Elite is a brand I've never heard of, and can't find a ton of information on, but they use a tried-and-true clutch pack style differential. I would eventually need to service this unit, but I don't expect that I'll put enough miles on it for this to be an issue. What's unique about this differential is it requires the engine to be mounted in a transverse orientation. This would allow me to directly mount the engine to the diff, eliminating the need to run a chain or belt, as required with the Quaife. However, after thinking about the critical alignment between the two units, and how low I'd have to put the engine in the car to line up with the diff, I thought an indirect drive solution would be best. It also allows me to reduce the input torque as seen by the differential, something that was a concern from the manufacturer.

I started to weigh the pros and cons of each solution, moving things around in CAD to see what packaged the best, making some wood templates to check fit and even buying a blown motor to put in the car and see what would actually work. After a pseudo–Design Review with my buddies, we decided that the Elite differential gave me the most options, packaged the best (especially from a chassis design side) and would deliver on the aesthetics potential of the engine bay.

So, there you go, I ordered the Elite option, which should hopefully arrive in January. In the meantime, I can focus on the front suspension, tearing down the donor bike, and designing the rear frame!

For the next update, I'll talk about wheels, tires, and front suspension stuff. I'm looking forward to hearing everyone's thoughts and continuing to get lots of help on this project!

Before I started teardown, I needed to make a cart for the car. This would allow me to move the body around the garage and elevate the car enough to work under. However, I couldn't go too tall, or I wouldn't be able to get the car under the mezzanine. After a few measurements, I ordered some Amazon bits, picked up some steel, and whipped up this little guy. 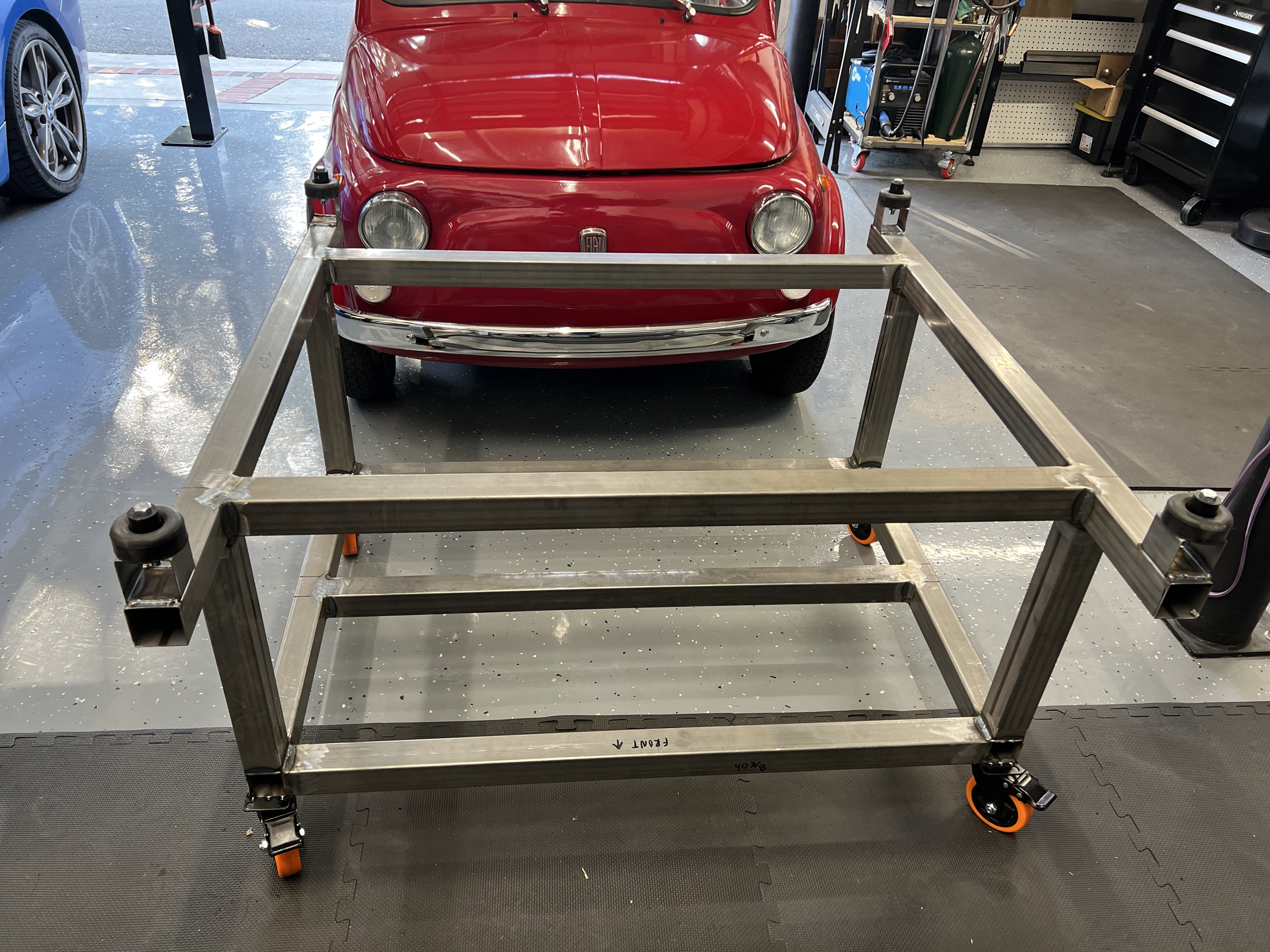 I measured corner-weights with and without me so I would have a good baseline for the project and something to keep in mind as I was adding and removing components. Then it was time to lift the car onto the cart, which totally was not sketchy or scary at all. 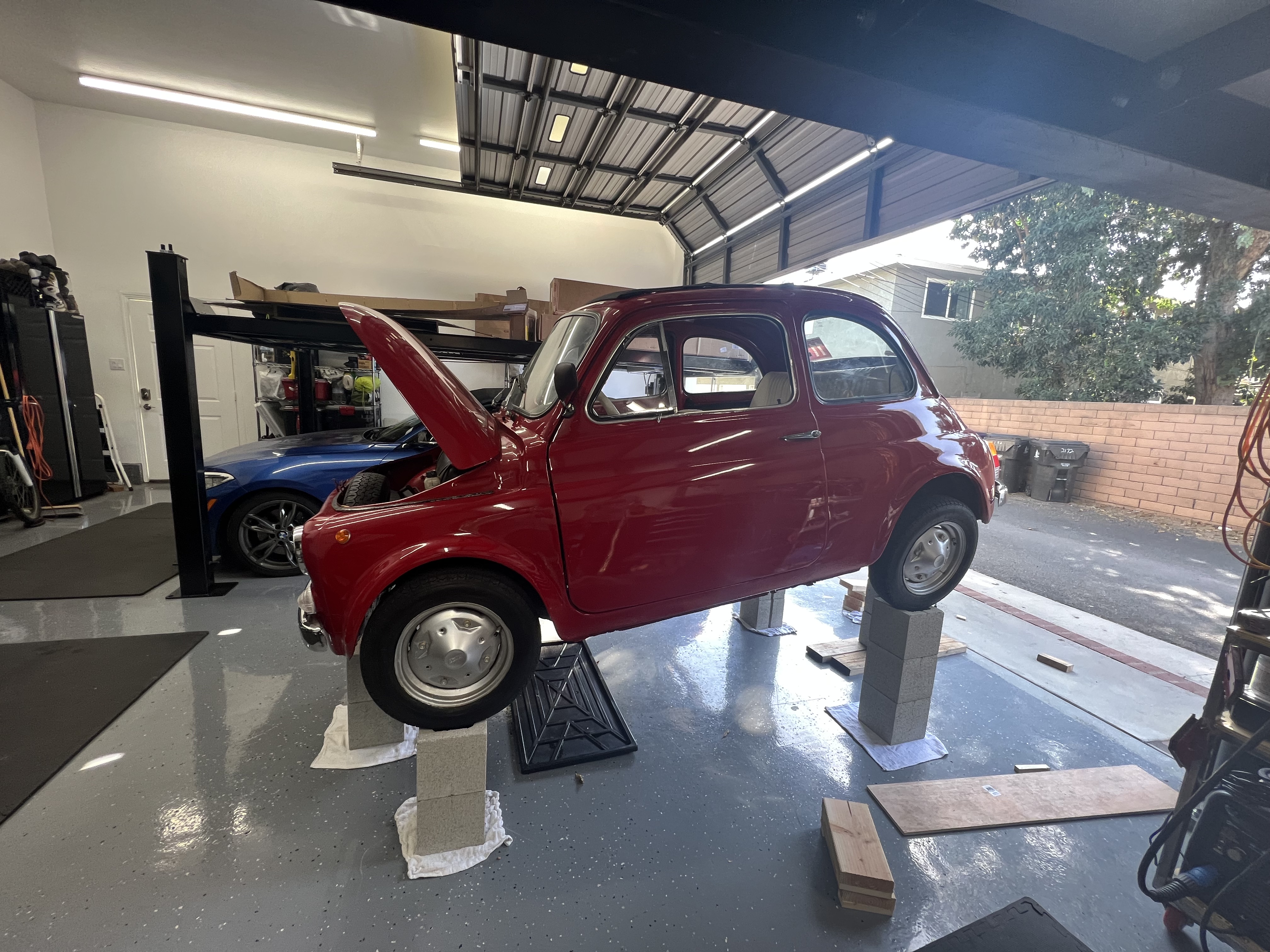 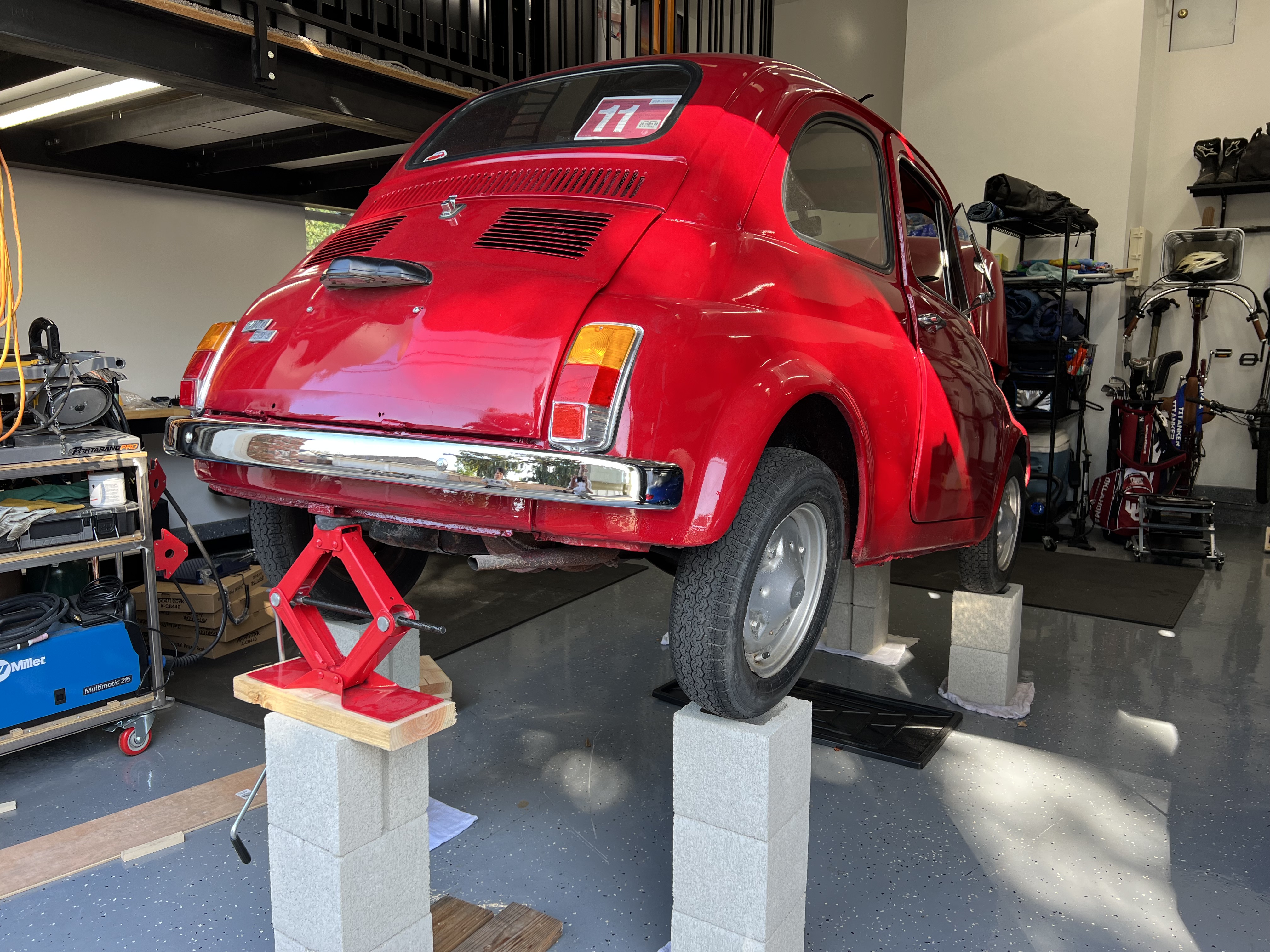 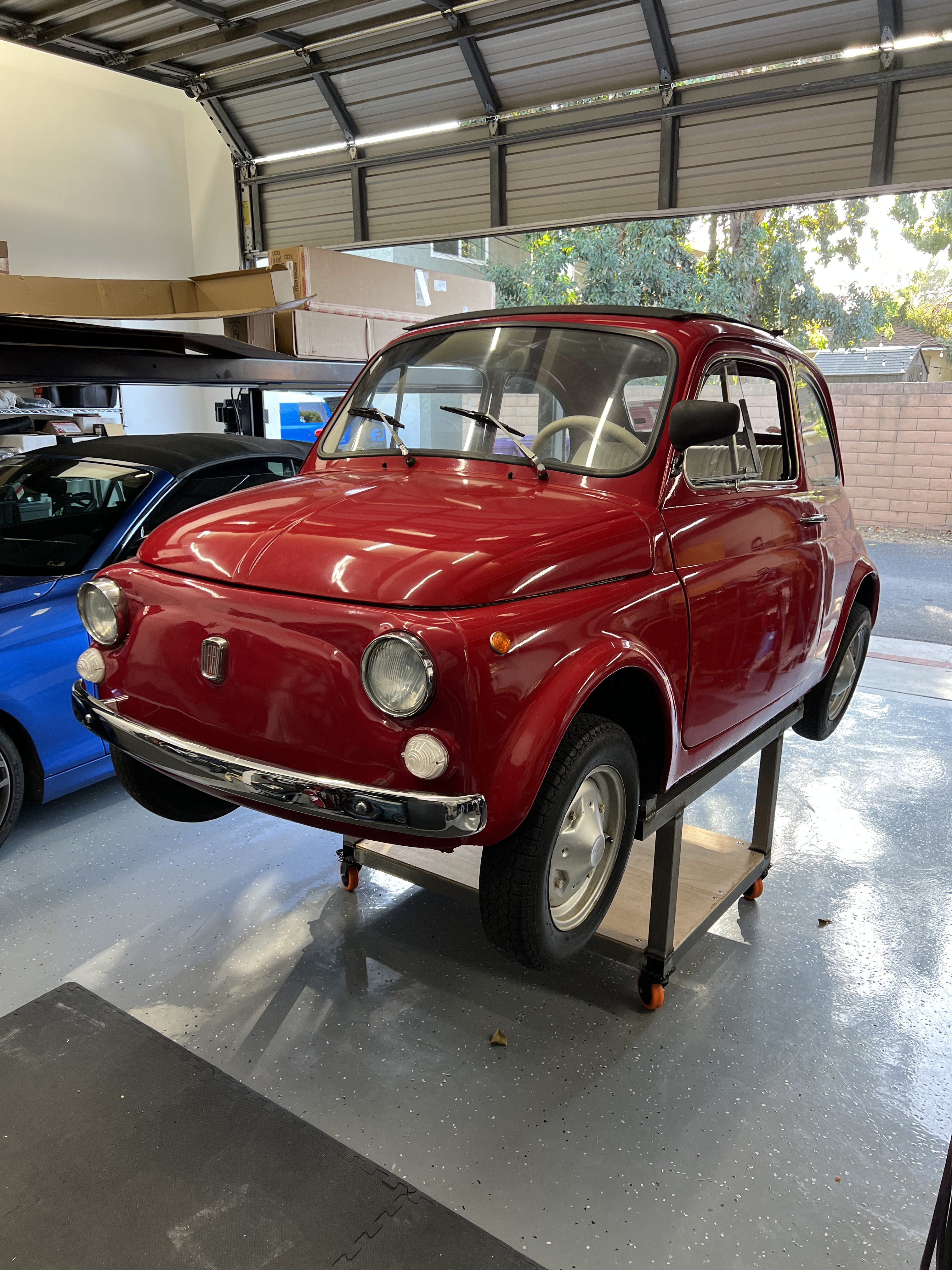 With Francesca on her new set of legs, it was time to remove the engine and suspension 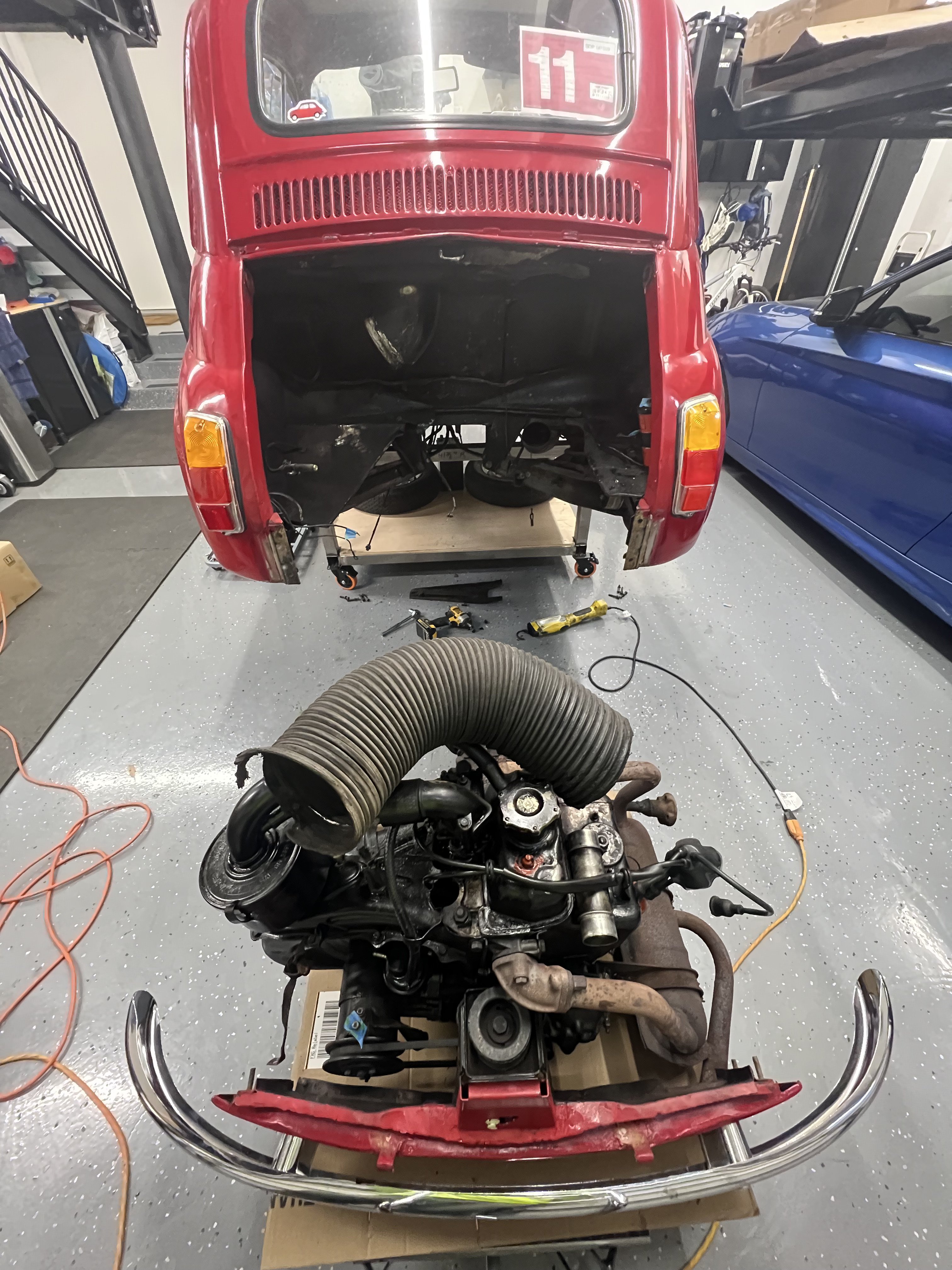 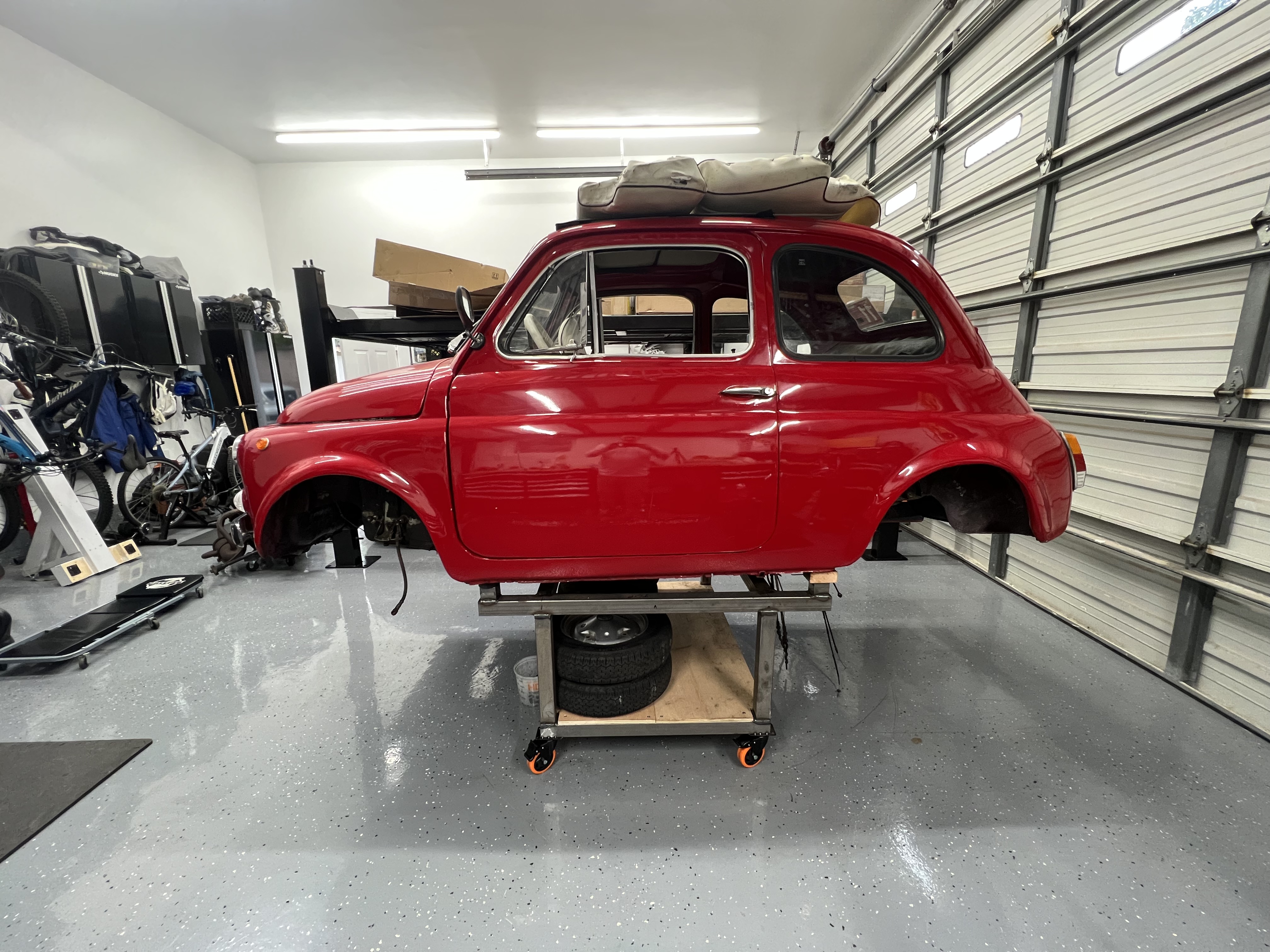 With all the major components out of the way, I had a buddy come over to 3D scan the engine compartment so I could start trying to figure out how I would package the motor. 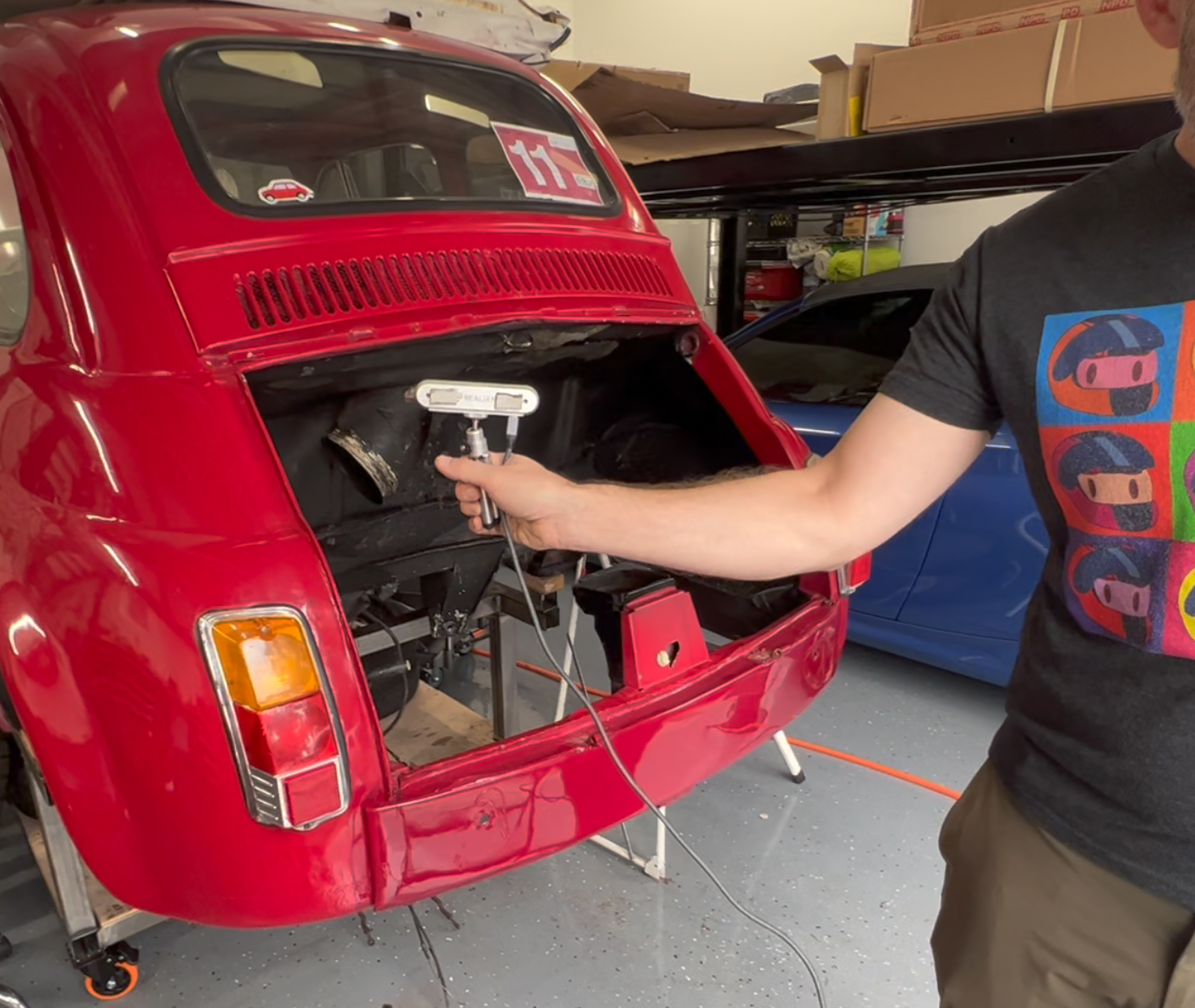 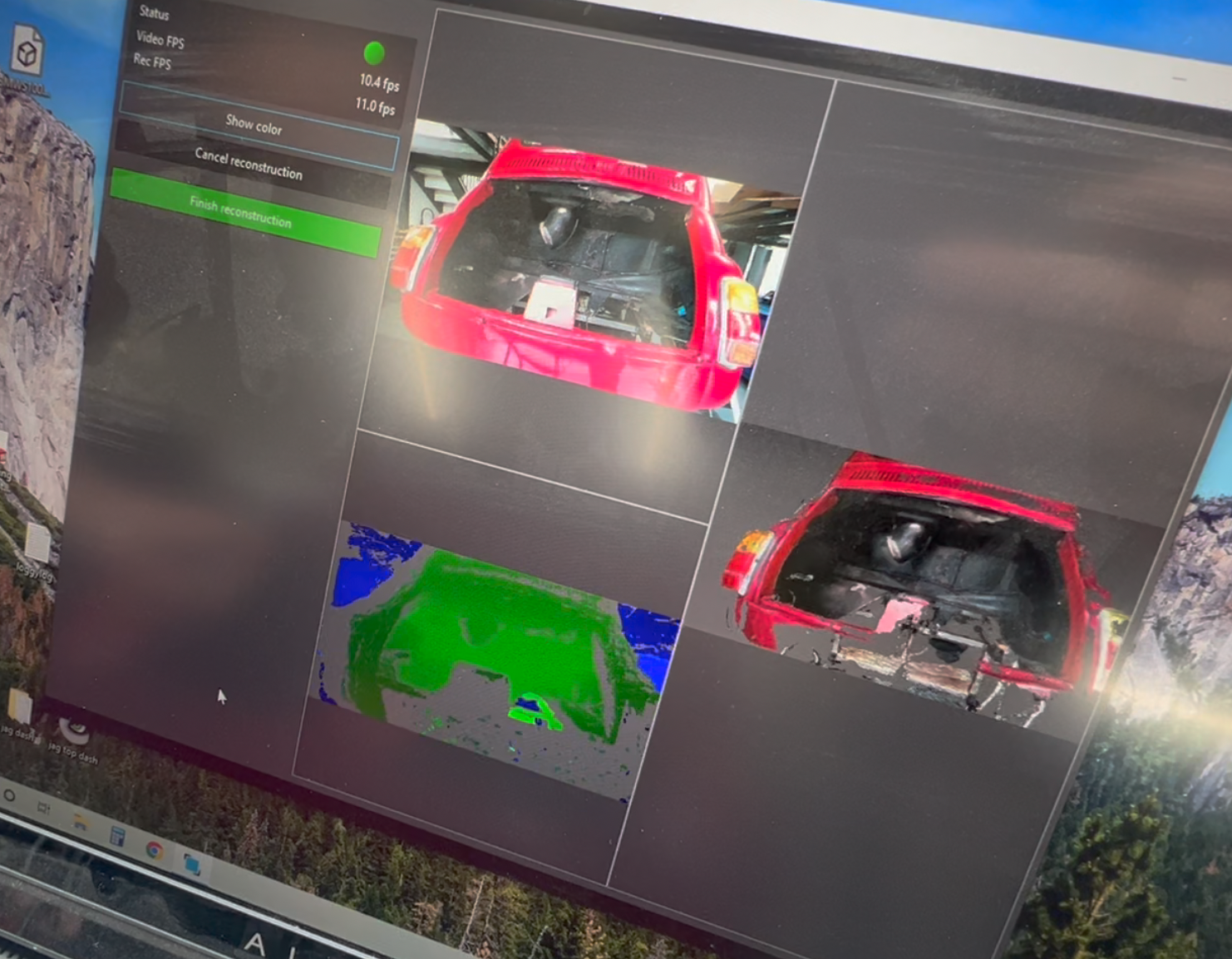 Now the design work can begin! 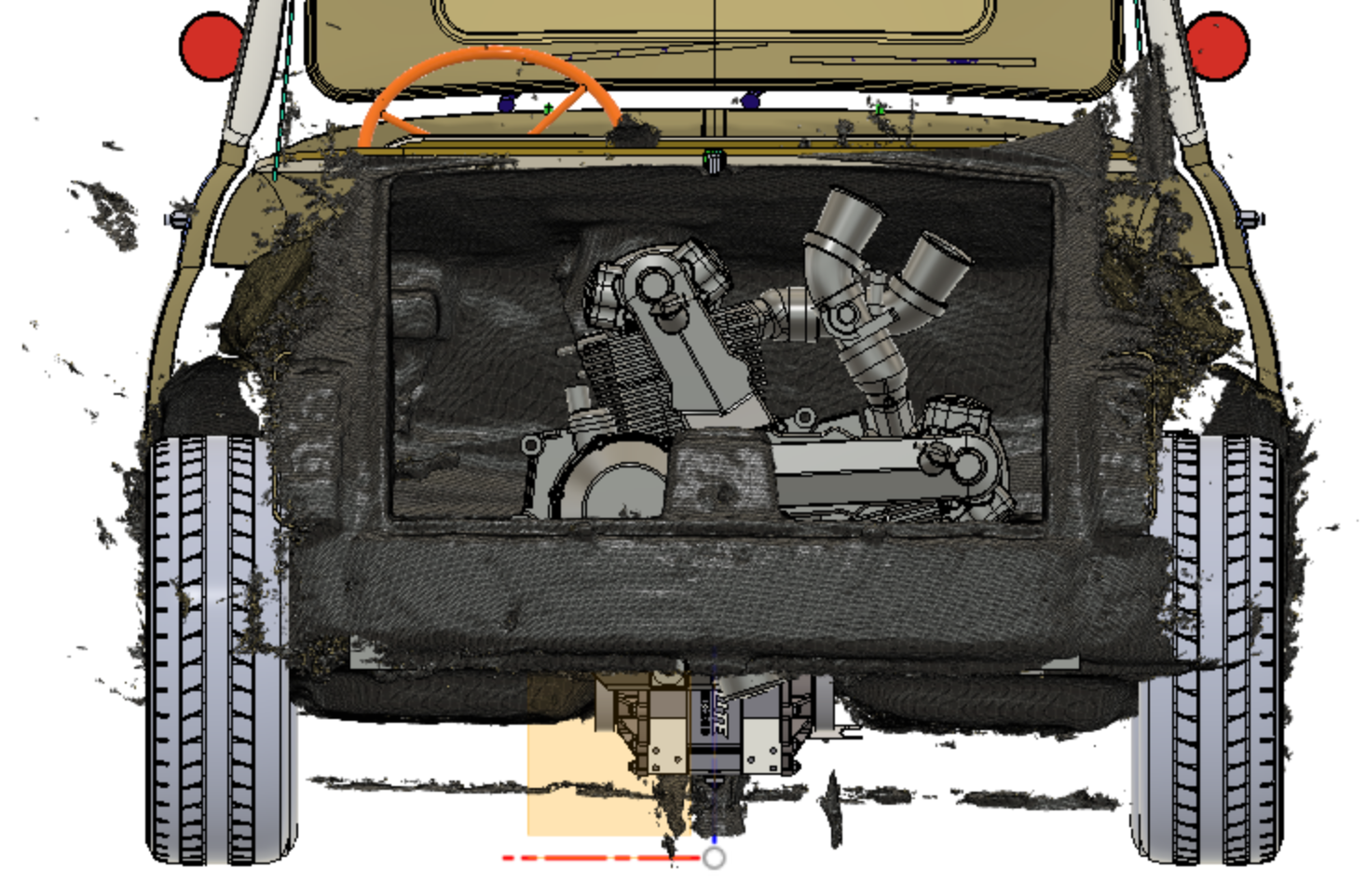