I didn't realise such tribes existed in the world today!


Daily Telegraph said:
One of the world's last Stone Age tribes has murdered two fishermen whose boat drifted on to a desert island in the Indian Ocean.

The Sentinelese, thought to number between 50 and 200, have rebuffed all contact with the modern world, firing a shower of arrows at anyone who comes within range.

They are believed to be the last pre-Neolithic tribe in the world to remain isolated and appear to have survived the 2004 Asian tsunami.

The two men killed, Sunder Raj, 48, and Pandit Tiwari, 52, were fishing illegally for mud crabs off North Sentinel Island, a speck of land in the Andaman and Nicobar Islands archipelago.

Fellow fishermen said they dropped anchor for the night on Jan 25 but fell into a deep sleep, probably helped by large amounts of alcohol.

During the night their anchor, a rock tied to a rope, failed to hold their open-topped boat against the currents and they drifted towards the island.

"As day broke, fellow fishermen say they tried to shout at the men and warn them they were in danger," said Samir Acharya, the head of the Society for Andaman and Nicobar Ecology, an environmental organisation.
"However they did not respond - they were probably drunk - and the boat drifted into the shallows where they were attacked and killed."
After the fishermen's families raised the alarm, the Indian coastguard tried to recover the bodies using a helicopter but was met by the customary hail of arrows.

Photographs shot from the helicopter show the near-naked tribesmen rushing to fire. But the downdraught from its rotors exposed the two fisherman buried in shallow graves and not roasted and eaten, as local rumour suggested.

Mr Acharya said the erroneous belief in the tribe's cannibalism grew from the practice of another tribe, the Onge, who would cut up and burn their dead to avoid them returning as evil spirits.

"People saw the flesh cooking on the fire and thought they must be cannibals but this incident clearly contradicts that belief," he said.
Attempts to recover the bodies of the two men have been suspended, although the Andaman Islands police chief, Dharmendra Kumar, said an operation might be mounted later.

"Right now, there will be casualties on both sides," he said from Port Blair. "The tribesmen are out in large numbers. We shall let things cool down and once these tribals move to the island's other end we will sneak in and bring back the bodies."

Environmental groups urged the authorities to leave the bodies and respect the three-mile exclusion zone thrown around the island.
In the 1980s and early 1990s many Sentinelese were killed in skirmishes with armed salvage operators who visited the island after a shipwreck. Since then the tribesmen have remained virtually undisturbed.

DNA analysis of another tribe, the Jarawa, whose members made first contact with the outside world in 1997, suggest that the tribesmen migrated from Africa around 60,000 years ago.

However, the experience of the Jarawa since their emergence - sexual exploitation, alcoholism and a measles epidemic - has encouraged efforts to protect the Sentinelese from a similar fate. 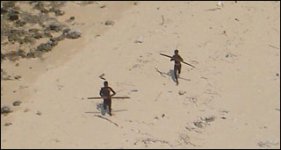 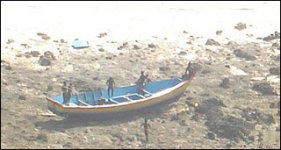 You mean they don't have net access or mobile phones? How do they survive

There not really a neolithic tribe though, I fricken went to the andomen islands in summer 1998, its by invitation only though to the mainland, we never went to any other islands as they are off limits to everyone, they are a quite bunch, but there are many 'tribes' like that all over, but no matter how much modern peeps try and leave them its inevitable they will sucumb to modern soceity, look at the amazon rainforest peeps for example!

It was in the Daily Telegraph yesterday, horrible situation. But i guess it was there fault for being to drunk to navigate the vessel and not knowing about the island before hand.

fiatpuntosx said:
It was in the Daily Telegraph yesterday, horrible situation. But i guess it was there fault for being to drunk to navigate the vessel and not knowing about the island before hand.

i've regularly been drunk and gotten on the bus to Bradford.. and not once have I been assaulted, or murdered..

now i once got the bus to mine heading wakefield way and passed out... when i woke up it was to a volley of punches and kicks fro some scallies.

Well there's no chance i'm going there for a holiday anytime. Amazing

F**K I'm going near Wakefield this weekend DAMN
You must log in or register to reply here.