Please help me to have the exploded view of Magneti Marelli distributor assembly parts for Fiat Uno 999cc.

I have a problem in assembling it back properly.

Which bits have you taken off
OP
OP
A

The assorted washers, metal and some looks like made of plastic.

It is the installation of washers that I'm confused.

So It’s not as bad as this then

is it the metal and nylon washers above and below the pickup plate, as under the locking pin?
OP
OP
A

Yes, you are right.
Sequence for putting back the washers is my problem.

No problem – I made notes last time 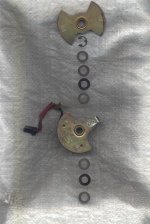 Black washers are nylon.
Sorry about the view. It’s as if you were looking from underneath the components.

Nice presentation.
This is really what I'm looking for.
It will surely resolve my problem.
Thank you very,very much Sir.
More power to you.
God bless.

What is distributor's outer O-Ring (gasket) like? if it's worn, you can get an oil leek into the bell housing (maybe).

and in guides section
https://www.fiatforum.com/showthread.php?t=43921

Please let the board know how you get on

Thanks a lot again Sir. :idea:
OP
OP
A

The problem with my Ignition Distributor is ok now.
My Baby Fiat is up and running now.
Thank you for your help.
Regards to all.

Glad you’re back on the road Alex

Where did you manage to get the Distributor cap and rotor arm out there? (as on Newbie thread )

When my Fiat got a problem , I let an Automotive Mechanic to troubleshoot the problem.He checked the fuel system and the ignition system and found no spark from the wires going to spark plugs which is from the Distributor Cap. When he checked the terminals of the Cap, he told me that two terminals were missing and it needs replacement.So, I accepted his findings and waited for the spare parts that I ordered from Manila. When the replacement arrived ,I noticed that it really has 4 terminals in it.But the replacement differs in color, it is very white.As indicated in the red box container , it reads Commercial Ignition , made in England.
As I compared the original ( as declared by the mechanic defective) from the replacement , I found out that the original has the same distance measurements accross from its terminals. So, I concluded that the original cap was not defective .
From my curiousity, I opened and dismantled the Distributor Assembly .
There , I found cut wires from the pick-up coil going to the ignition module(?).
I also found out that the vacuum-advance unit diaphragm lever and rotor arm were broken.
So, I concluded that the main reason for no spark (aside from broken rotor arm) was that the wires of pick-up coil were cut. So, I connected and soldered it back.
For the broken diaphragm lever,I replaced it with a hard plastic toothbrush handle by using epoxy.I got the lenght of the lever by measuring the broken lever as my reference.
I also replaced the defective rotor with a new one.
Then,when finished assembling the distributor assembly, (put back the original distributor cap) , I mounted it back to the engine and connected the wires on it.
I aligned the timing mark from the camshaft sprocket and checked the position of the rotor arm in the distributor and verify that it was pointed to spark plug number one .
After checking that all wires were connected and nuts tightened, I tried to start the engine. The engine starts and running !!!
I loosened the nuts of the distributor a little bit, then moved the distributor back and forth for proper timing,then retightened it.
Now,I'm really happy that my Fiat Uno is running again.
Sir Louie, your really helped me a lot.Thank you.
----------------------------------------------------
My conclusion why the wires were cut ,rotor and diaphragm lever broken:
The reluctor and pick-up coil hit each other and then it caused the pick-up coil assembly to rotate with the reluctor,then breaks the diaphragm lever and rotor.
Before it broke down, I heard ticking sound from the distributor . Maybe it was the pick-up coil hitting the reluctor already.
Now, I set an air gap by loosening the pick-up holddown screw, just enough
not to hit the reluctor,then retightened the the holddown screw.

That's my experience I want to share. Regards to all.

(Please excuse my English grammar since I'm not used to it.Thanks.)

Glad you’re back on the road .
M

My Juan and only Uno.

Wonderful presentation on the exploded view of the Marelli distributor, It's a big help for all of us here. Thanks a lot.

Nice to hear your Uno is back on the road. Will e-mail you contact no. and add of FIAT stores in Manila. Enjoy the ride.

I have a problem with my FIAT, it doesn't start as it used to, now you have to pump it on and off fast while the ignition is turned, I guess its the placement of the "igniter" thing on my FIAT was infront, its the other site of your picture Mr. Louie Bee, could it be? also I found this little plastic thing on the toolbox which I think the mechanic forgot to place back. ( image with o-ring below ) thanks in advance sir Louie.

LouieDIV
You must log in or register to reply here.