Guide Gallery Discussion
First of all, this is the unit that I was replacing. The standard Blaupunkt CD player: 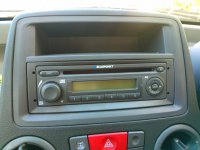 Removing it was a pig. For some people it seems to be easy, others struggle. I tried some different types of removal keys: 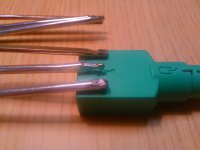 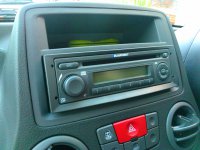 Turns out my car had a load of 'Velcro' stuck around the radio - presumably to stop it rattling, but it made it really hard to move. Here's a slightly blurry pic showing how far in the keys fit when engaged with the radio bracket correctly: 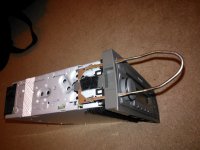 Some people report success using coat hanger wire and the like, but really there's no substitute for the correct removal keys, especially given how hard I had to pull to get the thing out!

There are three sets of connectors: 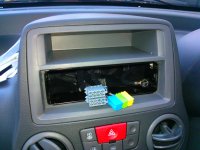 On the left, the standard ISO connector, in the middle I'm told is the CANBUS (presumably for steering wheel controls and the like if fitted) and on the right the aerial. You'll most likely need an adapter for the last one.

Remove the existing metal cage by bending out the tabs, it was a very tight fit in my car and took some effort to remove. 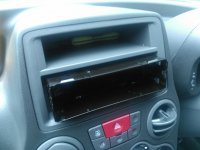 Also, I found the new radio's cage wouldn't _quite_ fit into the gap. Grr! So in the end I resorted to a small amount of filing to square off the corners of the gap. It didn't need much, just enough to allow the new cage to slide in. 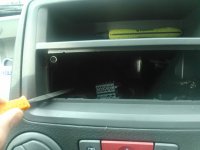 Then it fitted in just about: 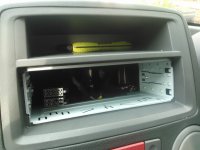 It was a bit of a struggle to get all the wiring back in place, I found I had to tuck the connector blocks as far back into the void as possible before the new radio would slot into place. Finally it did though, and doesn't look too out of place. 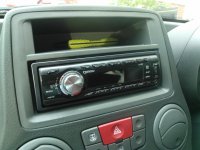 Anyway, replacing these things should be a trivial task, and I've done it without problem in other cars, but the Panda was a bit of a struggle. Hopefully the pics will help someone else to do the same job.