Guide Gallery Discussion
Okay!In starters sorry about my bad english hope you understand at least some of this stuff what i´m writing about!

This articles meaning is to give some advices for repairing Lucas ABS hydraulic unit in Fiat Marea Weekend years 96-99.
Little bit background:
Fiat Marea Weekend has been manufactured with 1.6, 1.8, 2.0 litres motors. And each one of them has made without and with anti-skid brakes ABS. Lucas has planned ABS brakes in Marea called "All In One" system. That system is an Achilles´ heel in Marea.
I bought "new car" (thanks to Finnish cartaxes) -97 Marea Weekend 1.8 just about few weeks ago. Abs light was already on in buying situation and i got really good discount(half of price). When the price was cheap and the car was really steady to drive we made a deal. But in that time, i didn´t knew where i had my hands put.Then in diagnoses:
I visited in garage nearby where my old schoolfriend is working. And he made diagnost to ABS system. First Examiner detected Central unit faulty code which lead us to the ABS´main fuse box. We found out that the former owner had taken away the ABS´main fuse which is 60 Amps. OK we put the fuse back and made another failure diagnost with Examiner(and i crossed my fingers). Next failure code was Pump motor which is electric and uses the hydraulic units hydraulic pump.In that time we went to see ePer (Fiats sparepartprogram), if we could find that electric motor in sparepart list. Yeah sure we finded that whole centralunit but surprise - in that unit you can´t get any spareparts from Fiat. You must buy the god dam whole unit. Then i took a really good grip from the table before my friend told me the price 2400€...

When I heard the price, i started to call scrapyards. But every scrapyard got "no" in there shelfs. Scrapyard guys said that it´s a part that many people asks every day. Yeah, sure, so they tell for there all customers to get a little bit better price from scrapy parts. Ok so i Googled internet. I discovered a re-manufacturer in England which sells that whole unit. The price was 525£ plus cargo to Finland and also i should be sending that old unit to England. No No No never... What human hand has made, a human hand can fix... and from that idea my ABS central unit repairing project started.

This example and pictures of it, are made with 1.8 l Fiat Marea
Weekend -97. From other models i can´t say anything, but
i presume that other models don´t difference really much from my car.

First you´ve got to take the unit to your pretty hand
In that case it would be easy if you:

1. Remove the battery minus terminal (-) with 8 mm open-end wrench

2. Remove the rubberhose from the air flow meter to aircleaner, original Fiat hose clamps can be removed with plain screwdriver and also normal hose clamps.

4. Remove the fuse box cover and the fuse box mounting bracket with the same tools as in previous stage plus PH2 screwdriver. 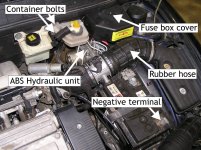 1. Reserve a nice stack of rags nearby before you start to remove the unit.

2. Start with undoing first the brakepipe connectors with open or fixed wrench 11 mm and 13 mm. I recommend a real pipe wrench which is fixed for nuts like these.(mine pipes were jammed like hell)

3. Remove the terminal connector from unit pulling the red part of it in drive direction
and same time pull the connector out from unit. If the wirings are in your way, you can loose wiring holders which are located under wirings (i didn´t have to loose those holders) 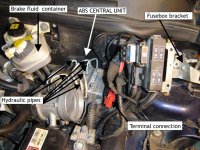 Now you can clean the unit little bit, because you are going to open the electric unit and you don´t want the brake fluids go in there. Don´t brake any wires when cleaning the unit.

Separating all the parts in unit

After this you can remove the electric motor undoing two M5x65 bolts from the end of the motor. Motor should be released from the hydraulic block with little knocking with hammer. DON´T knock too hard, it doesn´t do any good for the magnets inside the motor cover (trust me i know what i´m talking about). 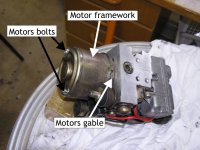 Next comes the control units removing. 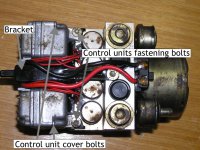 Hella made electric control units weak link is motors control relay. I did find same kind of relay from Finland in a day/night. Or actually three of them. Price was 3 € each. And also i bought electric motor bearings which were 608Z and 6001Z. And price was 14 € total. 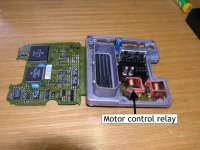 Motor control relay, what i bought, wasn´t exactly same one that was in circuitboard. Because on circuitboard there was an open type relay and i bought a sealed type relay. So i had to little bit modify it with sharp knife and little pliers. I took the seal cover partially off from relay and voila it fitted just perfectly in circuitboard. Old relay away and soldered the new one on board. I recommend to buy/borrow a good soldering iron, because the soldering heat is pretty big what you need for getting the old relay off, and the new one on board. There is maximum 30 amps load which is pasting through relays pins. So soldering must be really good.

Internet is good way to find a reseller for those relays. I think that the voltage, maximum amp and relays pin european measurement are the main values that must be right.

You can open the electric motor with little punch tool and hammer. Knock the motors gable end away from the motors framework but be very careful that you don´t damage the gable. Gable is sealed with little bonding agent but should be removed when you gently knock it off. When the gable end opens the framework magnets pull the insulator in but with little force you can get insulator with bearings and brush holder out. Bearing in insulators brush holder head is pretty difficult to remove but with two legged gearpuller and with little sharp tap to gear pullers fastening bolts head it can be removed.For new bearing assembly i recommend a long socket and hammer.Gently knock the bearing in axle. BUT DON´T KNOCK BEARING TOO MUCH, because it is going to be too tight to roll and the control unit makes a fault code because the electric motor is overloaded. (believe me that too i know what i´m talking). Other bearing is easier to change and don´t loose that slipring what is between insulator and bearing. The main advice is that when you repack motor, the motor should roll easily and with no jamming. 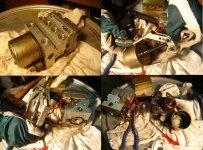 Ok now you can rebuild your ABS hydraulic unit in opposite order of these instructions above.

If all goes well, after you have bleed the brake system as a conventional system, when you start, the pump motor should work fine and the fault code vanishes.


I don´t know Englands vehicles inspection system, but in Finland we must inspect the vehicle every year and the ABS light must be off, otherwise you can´t get permission to drive that car.

I would be very glad if you give me some feedback of this article, if it helps you with your ABS brakes repairing.