Palio How to change your Dash Leds

Guide Gallery Discussion
Disclaimer: I'm not responsible for any damage you do to your self or the car, you should follow my steps on your own responsibility.


-Tools:
Well you have to excuse me on this one because I don't know the names of all the tools in English so the ones I don't know I will replace with a picture for that tool. 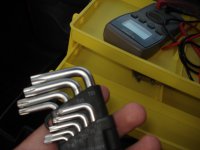 1- There are two screws at the top which you will remove with tool number2. 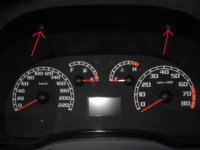 2- There is a plastic piece that you will need to remove, its easy but just take it out gently so as not to scratch anything like I did. (light blue arrows pointing to the scratches). 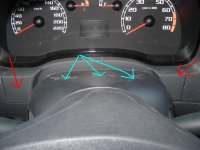 3- Now remove those 2 lower screws to free the dash from its place. 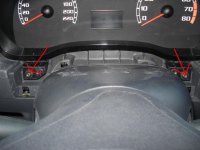 4- Now there is a plug behind the dash so unplug that and take out the dash from its place but it’s really tight so also take care from scratching anything. 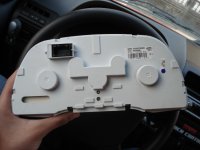 5- You sure remove that white plastic cover and this is what you will find. So you have to bend those little metal pieces pointed with blue arrows to allow the circuit's cover to come off and then just pull those plastic pieces to the back and take the cover off but gentle not to break them. 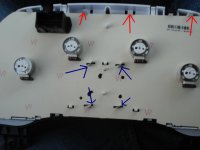 6- Trying to pull the cover won't work because there are still those 4 pointers for the gauges which can be easily pulled out. 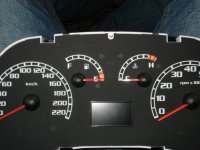 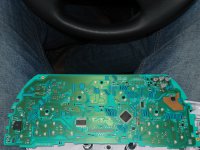 Then what I did was plug it back in just as a circuit and measured the voltages and currents of the LEDs with the Multimeter. While measuring make sure the Multimeter wires (or whatever they are called in English) is not touching anything else since these are SMT LEDs which are only found in newer cars but the older cars have normal LEDs so no need to worry about it if you have an older car. 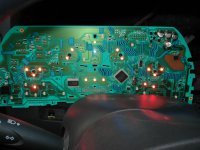 8- Finally after taking your measurements you go and order the number of LEDs you need to replace with the color you want and then you de-solder the old LED out and replace it with the newer one and enjoy the new look of the dash.