Guide Gallery Discussion
I have just fitted an alarm and remote central locking kit to my 1998 Cinq Sporting (having had my radio stolen…). I’m writing some notes here in case they might help someone.

The alarm is an Ultrascan AN214 bought new off eBay for £25 + P&P. I chose it because comments on the internet were positive, it has quite a good spec, and it was cheap. BUT the bad news is I found out that the company no longer exists, although support is still available through Snooper / Cobra, who seemed to have taken over Ultrascan’s old stock, if not the company.

·I mounted the siren/control unit under the ECU, next to the brake fluid reservoir, like this... 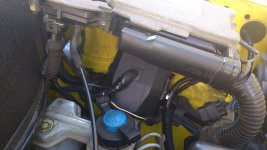 ...having rearranged the wiring loom and the earth cable on the inner wing to create more space. It was slightly confusing drilling the mounting holes for the bracket, because the inner wing is double-skinned at that point, so once through the first skin, you have to keep going…

·I mounted the status led in the switch blank next to the hazard warning switch (late dashboard).

·I tried to find a place for the snazzy dual-zone microwave box, but it won’t fit under the Cinq’s centre console, and there’s nowhere else for it to go. Maybe there’s more space in a Sei, I don’t know.

I took the alarm wires through the big thick split grommet on the n/s bulkhead insulation, like this... 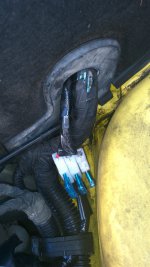 ...then under the heater, and through the speedo cable grommet, like this... 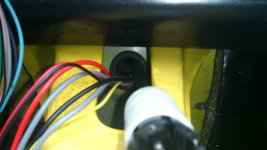 (I cut a small opening away from the run of the cable).

Before I did this I searched for any other realistic places following advice on the forum, but I reckoned that the extra time involved in gaining access (behind the soundproofing panel or the dashboard) would not bring any worthwhile benefit.

To gain access to the fuse wiring for a live feed to the alarm, I eventually worked out how to slide the fusebox out of its location: lift the plastic tab underneath and pull towards you. Removing its back cover was easier: unclip two thin plastic pegs underneath, unhook the two tabs on the top, then slide the cover towards you before lifting off.

Wires for the arm/disarm signal lighting were taken to the wires at the back of the hazard warning light switch (the blue and blue/black pair), like this... 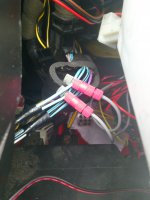 The immobiliser relay was connected to the feed wire for the starter solenoid (thick red wire on ignition switch). Earth wires were taken to the eyelet which can be found behind the connector block under the left hand end of the dashboard, like this... 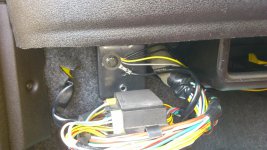 I don’t have a garage these days, nor access to outside power for a soldering iron (which is in store anyway!). So I wanted to find some dry connectors which are easy to fit, other than Scotch-lok. I discovered Posi-Lock and Posi-Tap connectors on-line, and although they’re not cheap, they seem to work well. The hazard switch picture shows the Posi-Tap. Posi-Lock are used for connecting 2 cable ends together. They need no tools to fit, although some cables need to be bared before connection.

Once I’d bought the alarm I found out another annoyance: the output for the central locking is apparently insufficient to activate it directly. So I had to look for an interface box. Ultrascan’s version, part number AN0012, is no longer available. Further research unearthed information on the Sparkrite SR-911, and the fitting instructions seemed very similar to Microscan’s. So I took a chance and bought a new unit I found on eBay (another£21 + P&P). This I have now got and wired up, and happily it works! I mounted the box on the steering column bracket, like this... 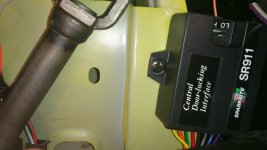 ...more or less behind the fusebox. The lock/unlock wires were taken to the central locking control unit (the white/yellow and blue/red wires) which is fitted very inaccessibly underneath the dash, behind the document tray. In order to get better access to it, I unscrewed its bracket from the document tray, and unscrewed and removed the tray itself (also the clutch cable/ linkage cover).

Unless you fit alarms every day, or you’re a very quick worker, you’d want to allow a weekend to do this comfortably from start to finish.