Its important before doing this task to disconnect the batteries Negative terminal. There is a risk of catching the Glowplug control unit and putting a short across it with hand tools blowing the fuse or damaging the control unit. Obviously you will need your radio keycode (if after market head unit is fitted) and the ability to re-set the clock


First things first is to remove the engine cover by the two 10mm bolts at the bottom. Then on to removing the 90 degree corragated pipe, first I would slacken the two 10mm hex bolts, then the two 10mm bolts (easier to use the socket set). Once slackened becareful of the metal seals at each end of the pipe. Once removed the pipe should easy come away, then your left with the removal of the EGR valve itself. On the left is a cable, remove this by slackening the yellow clip then pull off. Then you will see two gold coloured bolt heads and there is a third underneath the bolt on the left, undo these three with a 13mm spanner, they are quite long so dont worry about these falling out. Then you will notice a bracket that holds the valve to the manifold come loose whilst removing the bolts. Remove that with the three bolts. Then the EGR valve will stand on its own being held by another pipe below it. I removed this pipe too. If you follow this pipe down you will see it being held by a single 5mm bolt with a support bracket, undo this and the pipe will come free. The pipe will need a good clean, mine was clogged up.

Now to the EGR valve, you will have the valve and the pipe, take the pipe off, its held like the other pipe, 6mm bolts x2 then the metal seal. Once removed clean the pipe. I split the EGR valve in halve to clean the metal end and wow looked like a chimney from a 1800's house! Remove the four torx screws. On the mechanical end you will be able to push the valve to break free the crap thats inside. Blow out all the crap and clean it all the best you can with the wire brush and cloth. Then on the other piece you will see a little pin, use the wire brush to clean this, it was unbelievable seeing all the crap that came out of it! Then using long nose pliers gently pull the pin out to release more of the crap inside. Once all cleaned its time to put it all back together, remember to clean the spacer that was in between the to parts of the EGR valve. Once back together, this is were the fun begins!! Don't put the pipe back on the valve, put it back on too the engine were you loosened the single 5mm bolt, this took me 20 minutes! Finally once the bolt is in tighten up making sure the pipe is at the right angle and sitting in the right place! If your happy with were it sits then re-attach the EGR valve back to the manifold using the bracket and three golden looking bolts. Once these are tightened you need to attatch the pipe to the EGR valve to the (underneath) REMEMBER THE METAL SEAL!! Now when thats done, lucky you, this took me ages to do! Now re-attach the wire to the left and fit back on the 90 degree pipe and REMEMBER TO FIT THE METAL SEALS! and then the engine cover. JOB DONE!!

Take the car for a good run, not 5 minutes, im talking a good 20-30 minute drive, to justify if the work you have done has come to good use!

If not, then back to the drawing board!

Pictures below to give a better description. 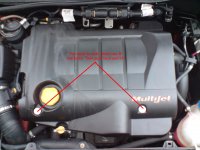 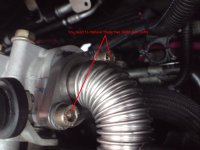 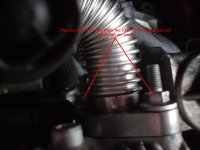 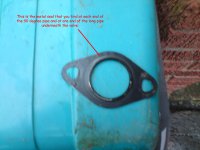 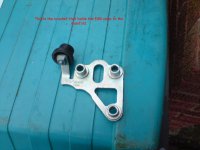