Guide Gallery Discussion
There is an official Fiat /Bosch modification for the Exhaust Gas Recirculation (EGR) system on the 1.8L 16V mJTD engine. It adds a restrictor plate. This is supposed to help with engine jerking and hesitation when accelerating at 1800-2000 rpm according to the Bosch service Bulletin. It may also help with other EGR issues. I started a thread in the technical forum about what this actually does, this tutorial covers fitting the restrictor. It's a recommended modification and an alternative to complete blanking (which is technically illegal in many countries including the UK).
This guide is based on my '06 Croma, but is applicable to any 1.9L 16V mJTD engine. Later cars ('08 onwards?) had the restrictor fitted from new.
The restrictor is a rectangular metal plate 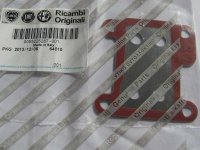 with 4 holes that fits between the EGR valve and the inlet manifold. The later restrictor, part No. 55225287 is used in this tutorial. It has the gaskets bonded on and is cheaper than the older part and two gaskets. You will also need an exhaust gasket, part No. 46773082. 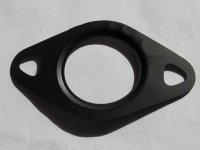 Ebay sellers don't seem to list this gasket for the 16V but DO list it fir the 1.9L 8V engines EGR valve. According to ePER it's the same part. For tools you just need 10mm and 13mm ring spanners or sockets, that's it. Most people will also want to clean the EGR valve while it's off. Brake cleaner and a brush is often used for this, but I used an ultrasonic cleaner because I happen to have one. The cleaning solution I used was water based, 90% hot water, 5% washing up liquid, 5% household ammonia. I also used a small battery to power the valve open for part of the cleaning. Final clean was very hot water with just a drop of washing up liquid.
Before, 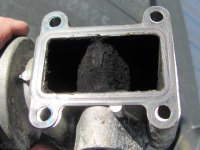 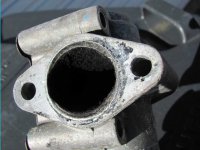 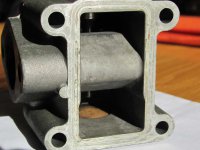 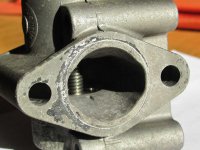 The EGR valve is bolted to the inlet manifold at the rear left ( from drivers point of view) of the engine. 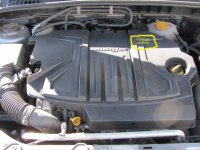 First remove the plastic engine cover, just pull up gently at each corner. 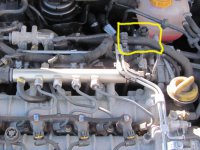 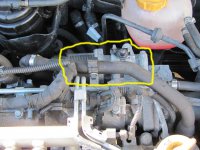 There are a total of 6 bolts, 2 exhaust bolts (E on picture) with 13mm across flat (AF) heads going vertically down to the exhaust inlet pipe and 4 inlet (I on pictures) with 10mm (AF) heads going horizontally rear to front. The right hand pair of these are unusual in having a threaded stud protruding from the head. 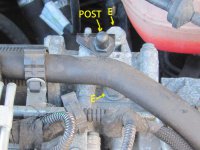 A bracket holding one of the engine cover posts is attached to these by two 10mm AF nuts. remove these nuts and the bracket. 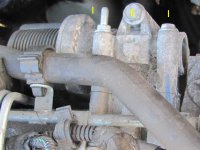 If the bolt holding the valve turns as well, use a thin 10mm spanner on the bolt head under the bracket to hold it. Try not to drop the nuts. Don't remove the inlet bolts at this stage. Next remove the two exhaust bolts with a 13mm socket. There is a pipe blocking access to the forward bolt. 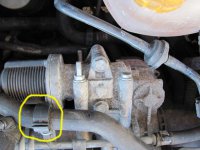 To move this you have to open a locating clamp. 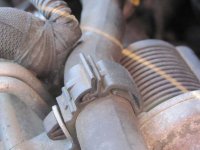 Put a flat screwdriver blade between the tabs, 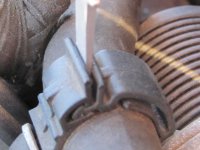 press down to unlock the tabs and move the handle of the screwdriver forward to separate them. 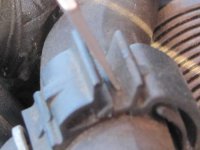 You can now move the pipe out of the way. Loosen BOTH the exhaust bolts 1/2 a turn before removing one so you don't twist the loose flange on the exhaust inlet. Now remove the inlet bolts with a 10mm spanner or socket. You may need a deep socket for the right hand bolts with the studs. Move the EGR valve back and disconnect the plug. To disconnect the plug, slide back the yellow locking tag, press on the body forward of the tag and pull the connector off. Remove the EGR Valve and the two old gaskets. Clean any gasket remains from the mating faces with a wooden or plastic scraper.
Clean the EGR valve as desired.
Fit the new exhaust gasket with the flared side of the center hole away from the EGR valve body (down when EGR installed). 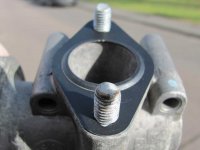 Run the exhaust bolts through the valve body and gasket. The gasket bolt holes are triangular so you can screw the bolts through and they hold the gasket in place. Do the same with the inlet bolts and restrictor plate. 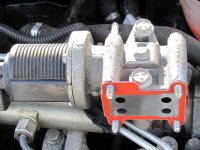 The restrictor has a larger tab on one of bolt hole locations. Put this at the top so anyone can see that a restrictor is fitted. 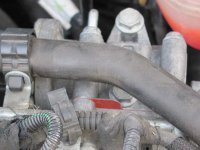 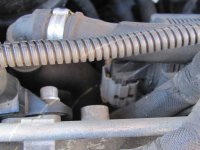