Here's the new to me nightmare in all it's glory and still in my truck bed. 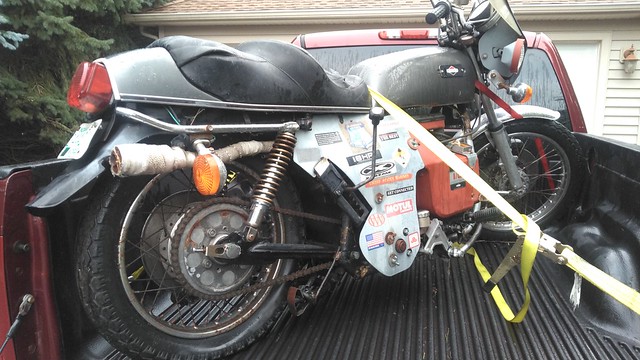 Figured it needed it's own thread.

I had a dentist appointment, so I'm back.

Backstory on the bike. The sellers buddy bought the bike in the late 80s, early 90s, with a junk engine. He did the conversion in the mid 90s. The seller, who is a gent in his 80s, bought the bike from from his buddy in '02, before his buddy passed. I was able to verify it with the Indiana title and the date on the engine.
The last time it was run in 2003. Luckily, or not, there is still a half a tank of fuel still in the tank.

The engine. It a 1991 B&S flat head boxer. I spent a lot of time with these in my younger days. 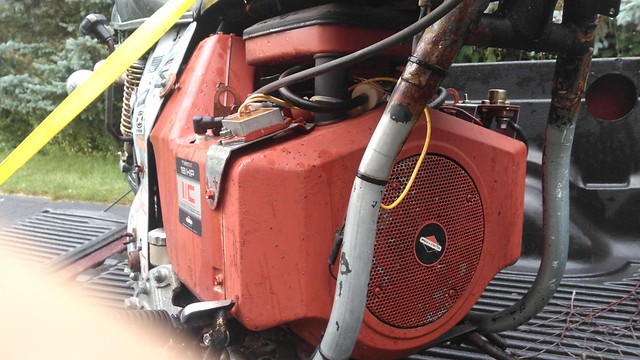 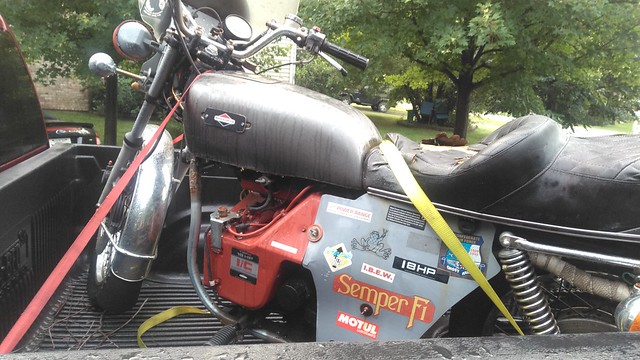 Right now, only plan I have is to get it out of the truck and into the garage. Tinkering will commence once the temps become fall like. It the back of my mind is the addition of a second carburetor.

Hey man, you really like a challenge don't you? I've spent quite a bit of time with Briggs lawnmower engines ranging from the wee side valves (flat head to you sir!) to the larger V twins they use on the ride on and bigger walk behind machines. We had a Simplicity walk behind and a Ferris ride on (3 wheeler with the rear wheel being the steering wheel - wonderful for going round trees and flowerbeds and it let me fantasize about riding a Harley - especially when it was idling. I've never seen that flat twin though. Maybe it'll sound like a BMW when it's running? Although less sophisticated than the Japanese engines, and maybe a little less reliable? I liked them a lot because I could always get parts for them and they'd be up and running again the next day.

Looking forward to following your adventures with it.
OP
OP
C

You here side valve on this side of the pond, but flathead is more common.
I've been figuring out how things were made to work today as I was working from home and had my job done by 8:30 this morning. Interesting how it was carried out.

But, Shades of VeloSolex, the Bronda is friction drive. 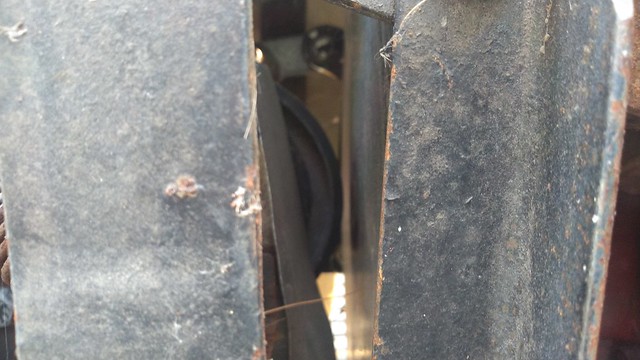 Like just about every vertical shaft, rear engine riding mower out there that's not hydrostatic. Snapper comes to mind.

The 'clutch' is nothing more than the original clutch cable and lever moving the 'driven wheel/transmission' away from the driving wheel when pulled in. Looks like a Rube Goldberg kludge but I'll not mess with it.

This flat twin could sound like the 18HP Onans that I had on a tractor and a welder. The entire neighborhood will know when it starts, though, it could just sound like my Ural, which sounds like an old BMW airhead.

I have a drawer full of B&S tools so this engine will just be an old Briggs mower engine times two.
OP
OP
C

Finally got some help to get the bike off the the truck. Pulled the fuel tank and drained 3.5 gallons of I don't know what from it. It's not pretty inside but I've seen worse. I will need to patch one spot where it rusted through.

The engine turns freely, so that's a good sign. Picked up a battery, plugs, and an oil filter. Changed the oil. It was nasty. Tried the starter but it's locked up. And that's where I stopped until next weekend.

Cheest said:
It's not pretty inside but I've seen worse. I will need to patch one spot where it rusted through.
Click to expand...

Oh well, look on the bright side, should make it easier to wash it out?
OP
OP
C

Pugglt Auld Jock said:
Oh well, look on the bright side, should make it easier to wash it out?
Click to expand...

I hope so. I dried it out with my hot air gun over a couple hours then sprayed crankcase fogging oil inside until I can get back to it.
D

All was going well, then BOFFF and he now had an instant added pint or two capacity. At least the filler cap was NOT fitted so no real harm done.
OP
OP
C

All was going well, then BOFFF and he now had an instant added pint or two capacity. At least the filler cap was NOT fitted so no real harm done.
Click to expand...

No worries about this one becoming exciting. What ever I drained from the tank had been in it since 03 and could hardly be called fuel anymore.
D

I said it before - four water-cooled 125 stroker cylinders can be set in an X format around a single (wider) big end journal. You get a 500cc engine with all four con-rods on one crank pin. You'll need a crankcase with four holes and a crank that's hollow on one side. You then use a small blower to feed air into the crankcase via the hollow crank. All four pots use their usual transfer ports. Once it's running the sucking effect of the exhaust will keep it running or add a bigger blower gears off the crank.
Benefits - four bangs per revolution, near zero vibration and near zero torque vibration.
OP
OP
C

I had some time today and pulled the locked up starter from the B&S engine. First thing to note is that the fellow who built this thing did not figure in repairs, or he was anti-mechanic. Besides pulling the front and right side blower covers, which was expected, I also need to dismantle part of the clutch assembly plus unbolt and raise the engine.

As expected, the starter was locked up. The armature was rusted to the magnets. It took some elbow grease to get everything cleaned up nice and shiny. Once back together, I attached my big battery charge to it and it spun happily.

My big concern was that there wouldn't be enough 'wattage in the cottage' using a motorcycle battery to spin the engine. It was plenty.

Next step will be to get some sparky to the sparky plugs.

Nice when you can wake something up like that without having to spend money on it isn't it? Always gives me a great feeling of satisfaction.

Wattage in the cottage? I never heard that before and I absolutely love it!
OP
OP
C

I first heard term about 25 years ago from my then supervisor. Management let a sales guy back in our shop to demonstrate a 'fume sucker' for our welding bench. The guy plugged it in, flipped the switch, and the lights over the welding bench dimmed just before the breaker tripped. My supervisor shouts, "Wow, there isn't enough wattage in the cottage to run that thing." Sales guy left with his head hanging down.

We always had power issues on the 110V side of that shop. The place was originally a warehouse. It should have been at least a 20A circuit to run some stuff but it was 15A which meant we could run lights and maybe an electric drill.

Had a little more luck today. I found the kill switch circuit shorted to ground, so no spark. Disconnected the kill switch from the coil and cranked the engine over. I was blessed with a fat blue spark that could have knocked me on my a$$ had I not been using a spark tester.

I gapped and installed a new set of plugs, squirted some ether* down the carb throat, and punch the starter button. There was this instant, if short lived, growl of 42ci boxer power, with several tablespoons of rust blown out of the exhaust for fun. Next up is the carb and the wiring.


*Sold as "Start, Ya Bastard" in Oz. Can't sell it by that name in the US cuz someones' knickers would end up severely knotted and they'd complain. Vocally.
OP
OP
C

The lump runs, and not too badly, either. I refreshed the carb yesterday and installed it this afternoon. I mounted a temporary fuel tank on the frame and plumbed that to the carb. Opened the petcock, closed the choke, and hit the starter button. Instant Vroom. Pretty pleased if I do say so myself. Idle is a tad high, though the throttle response is good. Could be better but I need a new air filter before I go too nuts with the final tune on the engine.

The alternator charges the battery, so that's a good thing, too. Turning on all the lights does drag it down, though. As with all my other bikes, I am going to go with all LEDs on this beast, too. On my Diesel project, the draw with all the lights on is less than 1A, I expect much the same on this one.

Yesterday, I found a rolled up piece of paper stuck behind some wires. It was a list of all the numbered wires, what they did, and where they went from the guy who wired the bike. I was able to deduce that it wasn't him that screwed up the kill switch wiring. BTW, that short to ground in the kill switch circuit, it wasn't. Some nitwit bypassed the handlebar kill switch, and for whatever reason, spliced that downstream of the kill switch on the engine (there's a second switch there) and just succeeded in permanently grounding out the coil.

There was this instant, if short lived, growl of 42ci boxer power, with several tablespoons of rust blown out of the exhaust for fun. Next up is the carb and the wiring.
Click to expand...

I miss all that stuff..

Been 4 years since I did any proper meddling like that

My bikes are 'resting' ...might have to wait until my retirement
You must log in or register to reply here.

Have VAG totally lost the plot?
2

Yesterday at 1:55 AM
koalar
K
C
Serviced the tipo today