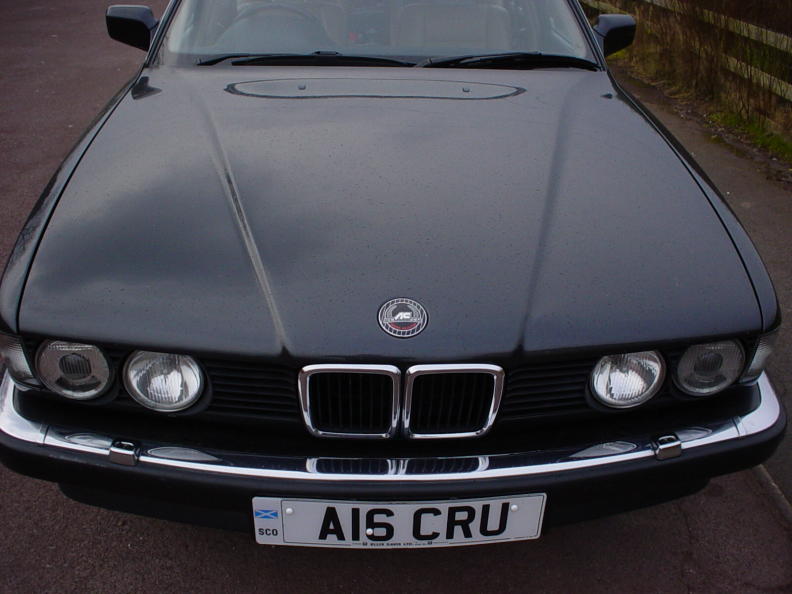 My only non Fiat Pride & Joy

OK I can hear the groans Yes it is a BMW, But how would you like to be tarred with the same brush....young drivers drive like f**kwitts etc etc So yes I own a 7 series BMW but because I'm a car enthusiast not because I'm some rich bloke who has to have a named badge. I love my panda and Barchetta just as much.

Anyway if you bear with me it does make sense, I bought this car on the 26th of Aug 2003 and cost £1250, it's a 1990 735 se switchable auto with a 3.5lt straight 6 and has 220bhp as standard. Up to now the mechanical service bills for the last three years (as I do everything myself as with all my cars) have been less than 2 yrs of Panda ownership (excluding fuel costs obviously ) till yesterday when i decided to change every suspension arm & bush so a bill of £300 + an air-con fan at £129

The mods have been very subtle clear indicators & side repeaters, new alloys (another ebay bargain) model details debadged but with AC roundels front & back that's about all on the outside.

Inside is slightly different and one of the reasons I love this car so much, it has a Veba 7" motorised monitor with 5 aux inputs, initially silver but painted black professionally to suit the interior, Veba 6 DVD/CD/MP3 changer, VCR, Alpine Sat-nav, and reverse camera built into the boot lid. The monitor also has FM radio built in. There is also trafficmaster for motorway & main route traffic jam info. I'va also fitted a photochromatic rear view mirror with automatic dip, outside temp info and compass (no choice it came with it but suppose it's another gadget).

It has BMW's 8 speaker hifi system with 2 additional 6x9 alpine speakers on the rear shelf but done so you don't see them. The only obvious addition when parked is the trafficmaster the monitor automatically folds away when the ign is turned off and looks like a sh*t stereo that no one would steal.

It comes with heated memory seats, elec lumbar support & electric headrests, Air-con etc, I changed the light colour of the seat switches blue/red to match the dash & monitor with Led's soldered in place of the standard white/yellow. AC gearstick chrome dial rings AC oil cap (but no longer as the seal was crap)and that's about it. The wiring was a nighmare for the installs but got there eventually.

Oh! it came with the No Plate A16CRU which can be fiddled to AlS CRU or A1 SCRU

I like her and hope that those that appreciate cars in general do also
Click to expand...

wow i think i you fit a cinq in there! its a big car that

It is big but doesn't drive like a euro cruiser it does have a wee bit of sportiness about it. Looking at getting a re-map remus exhaust (if I can find one)

very nice car indeedy, i love bmws, weve had all of them now , fav being the 7 series . omg its a ACS :yum: :yum: yum i love acs lol

anyways lovely car u have there

It's a bit noisy

Straight six, lovely noise. Wondered what your bimmer looked like, didn't you have 2/3 of these when you joined? I'd hate to pay the fuel bill on a V12.

just thinking about it then it has exactly the same engine as my jaguar sovereign, but my jag needs a little more work than yours and eats just as much fuel lol
OP
OP

FuzzyPanda said:
Straight six, lovely noise. Wondered what your bimmer looked like, didn't you have 2/3 of these when you joined? I'd hate to pay the fuel bill on a V12.
Click to expand...

Sold the V12 to make room for the Barchetta and it was just sitting collecting dust, never had my heart in it maybe cause I never used it enough also had the 528 but down to 3 cars in total, so think that's enough
OP
OP

herpsuk said:
very nice car indeedy, i love bmws, weve had all of them now , fav being the 7 series . omg its a ACS :yum: :yum: yum i love acs lol

anyways lovely car u have there
Click to expand...

It's not a real Schnitzer but after the powerflow exhaust is fitted and the ecu re-mapped will sound & go like one :yum:

BTW if you like 7's have a look at my site in my sig as it's full of them.

They all go to the same place, and prey that BMW will bid to buy them for my retirement
Last edited: Aug 11, 2006

Location
all over the place

and 161K its in v.good condition in respect to age and mileage
OP
OP

and 161K its in v.good condition in respect to age and mileage
Click to expand...

Thanks it's at 180K now and still drives well, even better all the front end steering & bushes have been replaced, it's very tight and had a drive down the country lanes just to test it was ok It's booked in on Monday for a full system de-cat & powerflow exhaust

Love BMW's and would love this one if you hadn't begun to stick AC badges and stuff to it, not a fan of the fake M's, AC's and Alpinas really sorry.

I normally like to keep standard/original as well but I love the AC wheels the badges I got a long time ago again I preffered them to the BMW one's at the time
Last edited: Aug 13, 2006

i shall get pics of my beast up when i can pull it outta the garage(needs a new battery, dies on turning key lol).

yeh ive been on your site before, its very good and i migth join up when we get our bm bk :yum:

No prob it's free so anytime. (just paid the subs for 6 mths so we should be OK for a while yet )
OP
OP

Liam you may not like this but got the Custom exhaust made & fitted today....

For those that want a better description WOW! nuff said!

On idle it burbles like a V8 when you take off slowly It's tone is low and you feel your insides vibrating When you give it the berries WOW! nuff said! When your cruising it's very slightly louder than normal but not uncomfortably so and remains relatively quiet.

The system is Powerflow and is made up of basically a straight through 2.5" pipe, there are three boxes to keep the noise down but these are also straight through with no baffles but have a system that absorbs the noise but nothing to obstruct the gas flow.

He cut the tailpipe short onto the last box that I wasn't overly happy with, but the moutings for the box were too far back so I could see his point, although I would have rather he made new mounts

On taking the car home that smile you get when you first drive a 7 series was planted firmly on my face. OK granted this may be the second stage of the midlife crisis but so what who wants to grow up.

There's a stunning one just restored on the site, absolutely mint

Decided to do the valve clearances tonight, as they are not hydraulic. Bear in mind this engine has done 180,000 miles when you look at the pics