Guide Gallery Discussion
Water Seal's
I notice both my Mk1 Bravos and a lot ive seen suffer from leaking and steamed up rear clusters.

I found the Mk2 rear light seal is removable so you can fit it to your Mk1 light clusters. 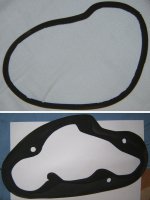 The mk2 seal is not glued to the cluster, apart from one corner where its glued just to hold it. The foam is far denser on the Mk2 I think this helps a lot.

The Mk1 seal is glued all the way round. I found this had come off on some of the lights. It is not actually one piece there is a join making the seal even worse. You will have to rub off all the mk1 seal glue.

Just slip the improved seal over your light and the fit the 3 white plastic washers, make sure they are all the way to the bottom of the thread. The shear surface area of the seal ensures a water tight seal.

Cleaning up the Lens
If your not confident about this it might be best not to bother, at least test on spare first. personally I have done five clusters and its been fine.

The clear lens is made of plastic and it gets quite scuffed. I used 2000 grit wet and dry sandpaper (wet) to get rid of the deeper scratches, this will leave the lens 'milky' I then buffed the lens with Tetrosyl rubbing compound and it comes up as good as new. 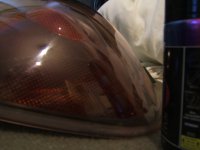 Painting an edge around the Lens
If you want to paint a line around your cluster you could also fill the gap behind with silicone. Some of my clusters have had cracks between the black and clear plastic, silicone should help stop water sneaking in. This can be a little messy so do it first. I just filled it then smoothed it down with my finger. 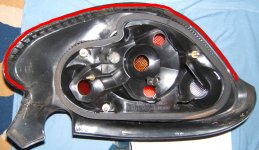 Then I masked off and filled this hairline gap with araldite

You can see how I masked the line around the cluster. Under the clear you can see a defined edge I just followed the outside of that edge. Rough up the area to be painted. 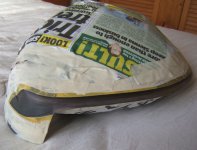 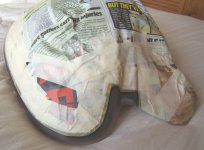 I used an direct to acrylic satin black followed by lacquer.
You can see the difference here. One is full of mould and the other is neat and tidy. 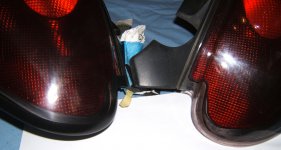 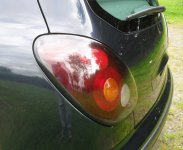 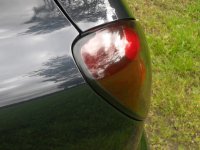