Guide Gallery Discussion
I found that the handbrake in my Bravo was pretty poor so after some trial and error, I found that you can fit a 146 handbrake instead. It feels much more exact and has a much nicer appearance

First, make sure your car is well cooled down, as you will be working under the car later. Chock the wheels and make sure it can't move.

Now jack the car up. Support the car with axle stands. At the centre of the car, there is a heatsheild held with 4x10mm nuts, undo these and wriggle the heatsheild to withdraw.

You should now see the handbrake cables along with the junction to the cable going to the handbrake itself. The handbrake is held in with 2x13mm bolts. You don't need to take off the exhaust but if you find room is tight feel free to do so

You should be seeing this by now: 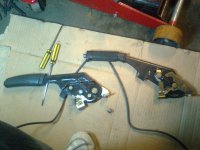 Note that the part that the adjuster cable goes through is slightly longer than the Bravo equavilent. You need to chop roughly half of this off, dress it down and lightly paint over so you end up with something like this: 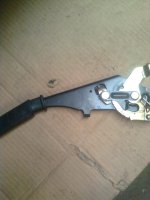 When refitting, make sure the cable can go through the handbrake, then fit it so the metal plate is in position. Refit the washer and adjuster nut. Plug in the sensor that came with the handbrake. The Bravo sensor fits, but its a different design and harder on the wires connection-wise.

You will need a helper to hold the handbrake in place while refitting the bolts or alternatively use a drill bit of the same diameter with a vice grips attached going through one of the holes. Run one bolt up fully but not tight so you have room to manouvere the second hole. Fit the second bolt then tighten both bolts fully. Refit the heat sheild.

Adjust the handbrake in the car to suit. Make sure it works properly or the brakes will feel very bad. Refit your gaiter.

Job done! It took longer to write the guide up than to fit the handbrake to the car 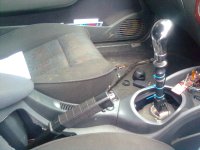