General I'm in a dilemma - which one to buy.

Currently reading:
General I'm in a dilemma - which one to buy.

I've liked both cinq's and seicentos for along time now and now I'm actually on the verge of buying a car, I'm not sure which one to buy. I definately want one or the other. I think they're nice little cars for buzzing about in and hopefully cheap to buy, insure and run because of the small engines.

I'm just wondering if one of you lovely people would be kind enough to give me some advice. I'm looking to spent about £1,200. Maybe an S reg (1998).
I've been looking at the fiat seicento 1.1 sporting. A mate of mines got one, he said he had 110mph out of it with a full car but somehow I think he's talking rubbish.

I'm after some info on the following please..

a: Nothing in it.
b: Cinq, it's older.
c: Cinq, as it was probably cheaper to buy.
d: Your 17 mate, just live with it how it is.
e: Head gasket is common, handbrake is crap, that's about it.

110mph without a turbo or engine swap aint happening though his speedo may be out far enough to show it.
cinqs are cheaper(and older)to buy
you can do loads in engine mods depending on budge/insurance
performance is pretty much identical though the sei's are supposeed to be a bit smoother.
relelaibility,well my non turbo cinq never gave me problems.the turbo cinq is another matter though

my advice is test drive both and get the one you like,have a search round the forum as cinq/sei members are probably the most prominent and theres plenty off tuning info
OP
OP
M

paulbfd said:
a: Nothing in it.
b: Cinq, it's older.
c: Cinq, as it was probably cheaper to buy.
d: Your 17 mate, just live with it how it is.
e: Head gasket is common, handbrake is crap, that's about it.
Click to expand...

I think I'll go for the seicento then. I could sort out the handbrake anyway, headgasket can just be taken off a car written off from the backend if it plays up.

I've found this seicento on autotrader, it's pretty nice I reckon. Only thing I'd change is alloys and maybe add an exhaust or induction kit. It's the 4th one down, the yellow one.

what do you reckon?
B

A - The sportings both run the same engine in the cinq and sei. the 1108cc 55hp SPI Fiat FIRE engine. They are both identical in every way so theoreticaly, neither will be faster. However, the sei is 50kg (i believe) heavier and so is theoreticaly a bit slower . The later versions of the sei sporting come with the same engine but fitted with an MPI fueling system (more than 1 injector). the power output is the same and so shouldnt be any faster but apparently they are smoother accelerators.

B - Cinqis are far cheaper than seis becuase they are older. The Cinqi came first with the sei to replace it. MK2 seis still go for £3000+ in some places! A cinqi sporting can be picked up for around £400 - £1000. Although the ones in the lower band of that price range are probably best avoided. MK1 seis generaly go in the region of £1000 - £1500 and MK2s can be anything upwards.

C - Not sure on this as the engines are the same in each so that factor doesnt count. I would probably say Cinqis are cheaper to insure because they are older, although im not 100% sure. quotes vary.

D - Plenty you can do, the Fiat FIRE engine is very tunable. anything from simple stuff like exhaust system, induction kit etc to bigger throttle bodies and fast road cams etc. the skys the limit if you can afford it.

E - Ive owned nothing but fiats and never had any major problems that I couldnt be held responsible for. Simple thing is that if you take care of your car, your car will take care of you. If you thrash it around all day and never service or maintain it, somethings going to go wrong sooner or later. Try to find a car with a good service history as a good start. If you cant find one then get a full service done straight away and thats an excelent starting point. Fiats are just as reliable as any other brand of car. owners are the ones that are unreliable.

nice sei but overpriced i think on those miles.
my turbo cinq cost less

a.Same. Mpi seis are much more refined through the gears and at top end but wont be in your budget

c.cinq but obviosuly depends on which version of cinq S, SX are group 1 sporting group 3

d.Search the forum for ideas, being 17 i wouldnt think turbo just yet

e.Headgasket, check for accident damage, check gearboxes, make sure for good service history but that isnt the be all and end all

Your mate was talking a load of hefty crap saying 110 with a full load. His speedo may have read that but speedos are very inaccurate circa 80mph, chances are he will have been doing close to 90 if he was lucky

I recommend you test drive both and see which one you like, we are gonna be biased which ever cento we own and so to stop our bickering id test drive em both if you can

If a head gasket goes, doesn't it basically mean you might aswell chuck the engine out?
B

I think I'll go for the seicento then. I could sort out the handbrake anyway, headgasket can just be taken off a car written off from the backend if it plays up.

I've found this seicento on autotrader, it's pretty nice I reckon. Only thing I'd change is alloys and maybe add an exhaust or induction kit. It's the 4th one down, the yellow one.

Would say its probably a little overpriced for the milage but make sure its got the service to back it up. high milage and no service history isnt a good combination as for all you know, it might never have had a cam belt change/oil change/coolant change etc. not good. find out more about it.

The yellow sei with 90k very overpriced. Worth closer to a grand. The red one below it with 30k+ is good value which u could get for 1200

mischief said:
If a head gasket goes, doesn't it basically mean you might aswell chuck the engine out?
Click to expand...

No. you can get a new head and skimming etc done
B

If a head gasket goes, doesn't it basically mean you might aswell chuck the engine out?
Click to expand...

nooooo. dont be silly just needs a new gasket and the head skimmed. not a super easy job but dooable if you know a bit about cars.

agreed. red one bellow looks a goodun, or atleast does from the description. would chase that up rather than the yellow one.
OP
OP
M

I don't really like the red one. I'm all for the yellow seicentos, there's something about them. I'll have a look around for a cheap yellow one.
O

Well, you could do it like I did and buy both.

Obviously the Cinquecento is cheaper to get as it is older.

Some insurances class the Seicento higher than the Cinquecento despite the fact that they really should be the same.

They are pretty much the same in terms of performance.

Tuning possibilities are endless. You will find plenty of threads about it.

mischief said:
I don't really like the red one. I'm all for the yellow seicentos, there's something about them. I'll have a look around for a cheap yellow one.
Click to expand...

well in that case i would look for a cheap yellow one but not the 90k one. I would be prepared to travel further affield, there are loads more with less melieage for that price
OP
OP
M

Yeah, I wouldn't mind the travelling to be honest but the closer the better. I'm open to travelling for a good deal.

consider buying off ebay. A couple of the members have purchased their vehicles off ebay and have no problems i dont think
Last edited: Feb 2, 2006
B

both of these beauties came via ebay 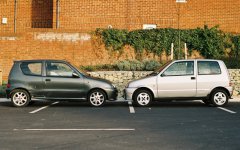 Cinqi was £995 at 30150 miles with a recent full service inc. cam belt, back box , new clutch etc. £700 worth of servicing infact with recipts to prove

Sei was £1150 at 64000 miles with few old mots and a few old service recipts from previous owner. nothing from the people we bought it from but its been sound so far was a last minute thing to buy it so not much looking around.
OP
OP
M

I'm liking that seicento, that's smart.
You must log in or register to reply here.

S
Technical Which one Induction kit?
2

General What a dilemma

General arch kit? which one

General Cinq or Sei which one to go for?
2 3