Grande Punto Fix for water in footwell/Rust at brake servo


I've seen this issue mentioned by a few people and have just discovered that my own 3 year old GP, which I bought around a month ago, was also affected.

The problem is that the seal on the hatch in front of the wiper motor has failed, so when water runs into the drain channel and down the drain holes below the windscreen, instead of running into the proper internal drain hole as intended it can flow out of the gap at the lower edge of the hatch and out onto the bulkhead. From there the water soaks into the covering of the hatch and continues down the bulkhead onto and around the brake master cylinder where it finally lies in a channel just below the master cylinder, where the vacuum hose enters the brake servo.

If not fixed, this area will eventually rust through completely, allowing water to run right into the driver's footwell and soaking the carpet.

Now for some pics highlighting the problem areas.

Here you can see the drain channel, the hatch is angled so that water entering the drain holes runs directly down the rear of the hatch: 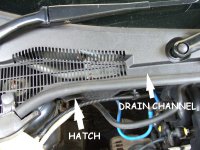 Check this cover for staining, caused by water leaking from the lower edge of the hatch seal:

You'll need to unscrew a plastic washer from just below the master cylinder on the left side, to pull back the covering and inspect the bulkhead/plate for signs of rust.

The water lies in this channel and will eventually completely rust through the plate attached to the front of the brake servo, allowing water to flow into the driver's footwell area: 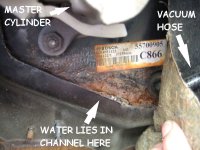 With the covering pulled back you can see the hatch clearly: 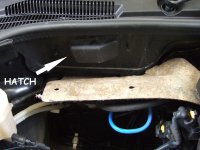 To remove and check the seal on the hatch we need to firstly remove the plastic panel below the wipers (scuttle panel). To do this remove both wiper arms (secured by 13mm nuts) and the 3 fixing screws, then pull off the rubber seal along the lower edge of the panel and the clips securing the 2 seals at each side where it seals against the bonnet.

The scuttle panel should now lift away and you can pull the hatch forward to inspect the seal.

As shown below, mine had completely failed and was cracked/hardened, allowing water to flow out of the gap and down the outside of the bulkhead towards the brake master cylinder.

You can also see the proper drain hole here (above the right arrow), where the water should drain: 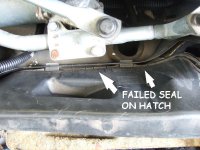 The original seal looks like some kind of spray on foam, which was obviously totally inadequate for the job, so I removed what was left of it and sealed around all 3 sides with Sikaflex 221, as shown here: 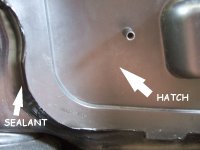 With that done, the water from the windscreen area now flows properly over the inside of the hatch and down the drain hole as intended, however I noticed that a little water was still able to drip from the rubber drain channel onto the brake servo vacuum hose and run down towards the point where the hose enters the brake servo.

This may not cause any problem but since I already had rust in that area I wanted to keep it as dry as possible, so I found that by rotating the rubber drain 180 degrees (so that the cut section is facing the front of the car rather than the back) the water drips completely clear of all the brake hoses. 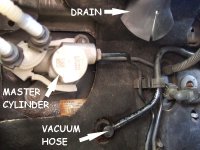 You'll have to check on your own car if it's necessary to also rotate the rubber drain piece, the water may already clear the brake servo vacuum hose OK, so only rotate this if necessary and then check that it's not dripping onto the alternator instead. 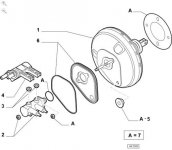