I used axle stands under the rear of the car direct onto the chassi and dropped the axle to the floor being carefull not to damage the brake pipes etc.

Checked the bushes by inserting the bolt and bending them down so I could see properly. As you can see from the photo's the near side bush had completely gone and had cracks in it. 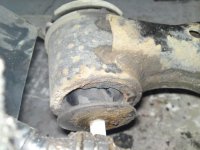 I knocked off the end plates and took photo's of the bushes positions so I could align the new ones the same way. 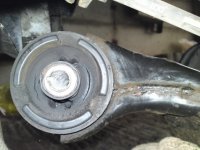 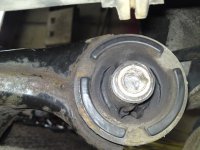 I then cut the center out of the bushes using a hack saw. 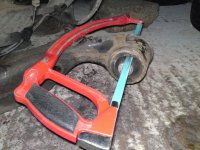 That left the outer shell of the bush so I carefully cut though it with a hack saw and pushed it out. 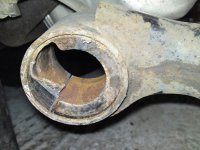 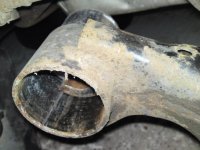 Cleaned up the bore and gave it a thin coat of copper grease. 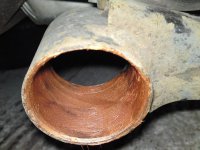 Drawed a line on the bush so I could align it properly with the weld on the axle. 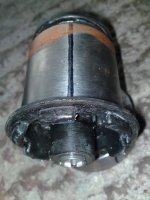 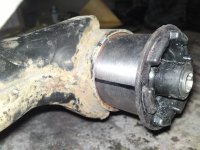 Pushed the bush in using a large bearing puller. 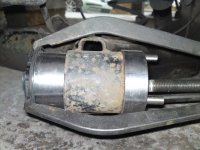 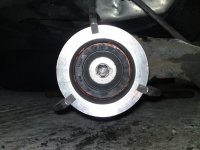 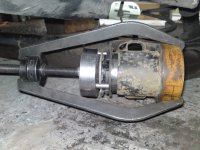 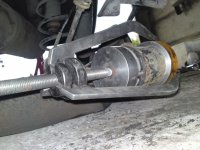 The bush is fully pushed in and correctly aligned. 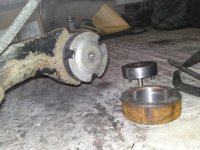 Raised up the axle and bolted it back to the chassi. 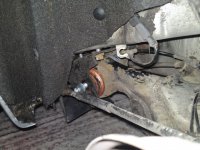 Tightened the 8 bolts holding the brackets, clipped the brake hoses etc back in place and then put the wheels back on. Checked the ride high was the same as before and torqued up the bolts that go through the bushes. 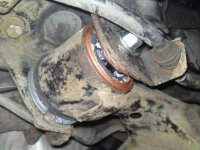 Reducing the interference fit to a more managable level was the key. I removed 0.15mm from both new bushes but it was still hard work to wind in the bearing puller. I had mine machined down by a friend, others have used other methods.

I hope some of you find this helpfull and saves you some cash in the process.