Guide Gallery Discussion
Disclaimer, The below is just a record of what I did once, it is not necessarily correct and should not be looked at by anyone ever, except at own risk.

The standard shock absorbers are hydraulic, there's nothing wrong with that, but most aftermarket shockers are gas, which is supposed to transfer heat better. Hot oil has less resistance hence the shock absorbing can decrease.

The doblo has great access to the rear shockers so that's a plus however I found the lower bolt incredibly difficult to remove on the offside, and if you only have a jack its frankly a right pain of a job. If you have tools, ramps, long breaker bars then it's probably a darn sight easier.


Tools you will need
Remove rear wheel, then using a wire brush, clean up the ends of the theads of the top and bottom shock absorber bolts this will pay dividends later, lubricate.

Don't look, only one jack. Thread sticking out to left lowest point. 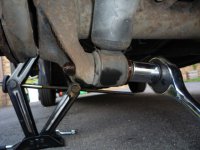 With the 19mm socket, loosten the top bolt. 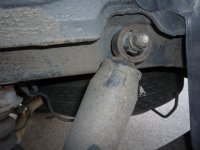 With the 22m socket and breaker bar, loosten the bottom bolt, I even had to put the jack under the end of the breaker bar to budge it.

Note this bolt is so heavy duty and tight it will resist all the way on the 10 or so turns to remove it.
Once the bottom bolt and washers is off, the top nut can come off. It will just spin so you will need an adjustable spanner or something to stop the bolt turning as you undo the nut. 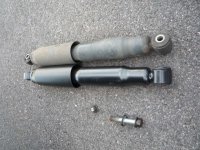 Clean up the threads using the wire brush, lubricate

Put some grease on the shafts of the bolts.
Pump the shock absorber three times to prime.

Fit to the top bolt, do up the nut lightly so the bush can still move freely.

Fitting the lower bolt may well need the axle raised a bit so apply the trolley jack to the axle.

Apply thread lock to the threads and do it up. To do this properly there are torque values, I took a short cut here and just did up the top bolt very tightly like I would do a wheel nut, and the bottom bolt, I did up insanely tightly using the breaker bar, I think the combination of that and the thread lock should do the job. I will check in a weeks time but really I don't think those bolts are going anywhere. 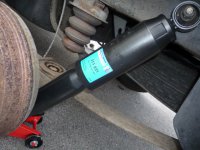 The old shock absorber is dangerous, the responsible thing is to disarm it by emptying it of oil before lobbing it in the metal recycling bin.