Guide Gallery Discussion
This guide covers repairing the cabin fan resistor pack when the thermal fuse has blown. This will likely be due to the fan motor having worn or badly lubricated bearings, leading to the fan stalling on setting 1. With a stalled motor, excess current flows through the resistor pack and there's no cooling air, so it overheats and the thermal fuse blows. 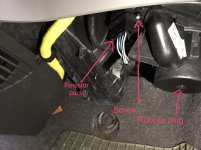 2. Unplug the cable from the resistor pack. There's a locking tab to be pressed on the connector.
3. Also a good idea is to remove the rubber bung from the centre of the fan and squirt some wd-40 on the bearing. Newspapers on the floor of the car would be sensible. I'm not sensible however and now have a car mat which smells like wd-40.

4. Refer to the image with numbers 1-4. This shows the pins on the resistor pack corresponding to switch settings 1-4. 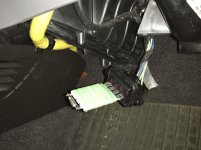 5. With the cable unplugged from the resistor pack, use a multimeter or continuity tester to verify the thermal fuse is blown. Just connect the probes either side of the fuse, it should be open circuit. If it is conducting electricity then it's not the cause of your problem and you shouldn't follow the rest of this guide.
6. Optional - if you want to test the resistors while you have your meter out, connect one probe on the side of the thermal fuse closest to the pin labelled 1, and then from this point the resistances to the pins 1-3 should be approx 5.8 ohms (pin 1), 3.8 ohms (pin 2) 2.8 ohms (pin 3)
7. Connect a new wire bridging the pins either side of the thermal fuse. Use solder instead of just wrapping it around the pins. This replaces the fuse, however note your wire will not melt if the resistor pack overheats, so we need to do more than just this. 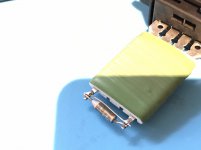 8. Reconnect the resistor pack to the cable in the car, switch on the ignition and verify the fan now runs on at least switch positions 4, 3 and 2. Maybe you are lucky and it also runs on 1. Quite likely though the fan will run very slowly or stall on position 1 - the cause of the original problem.

NOTE - only run the fan briefly if the resistor pack is not fully installed in the recess as it will have no cooling airflow. Also, even if your fan is working on position 1, I recommend continuing with the remaining steps for safety's sake (in case the fan slows and stalls in future)

9. Remove the resistor pack again. We will add a further short circuit to it so that switch position 1 runs at the same speed as switch position 2. This is a safety measure to prevent the fan being able to stall again, since we have removed the thermal fuse which provided protection against overheating. 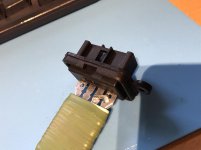 10. Compare the original circuit diagram with the version with a red line added. The red line is a new connection we will add, which allows the current to use the same two resistors whether the switch is in position 1 or 2. It removes the final resistor from the circuit, making the fan speed on setting 1 higher. 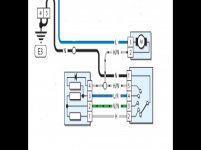 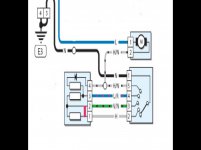 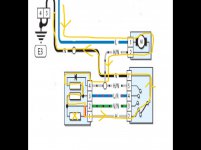 12. Reinstall the resistor pack. Now the fan will work reliably on all switch settings, but the fan speed on switch setting 1 will be the same as switch setting 2. This means the fan will never be running slow enough to stall.
Reactions: varesecrazy
Share:
Facebook Twitter Reddit Pinterest Tumblr WhatsApp Email Share Link