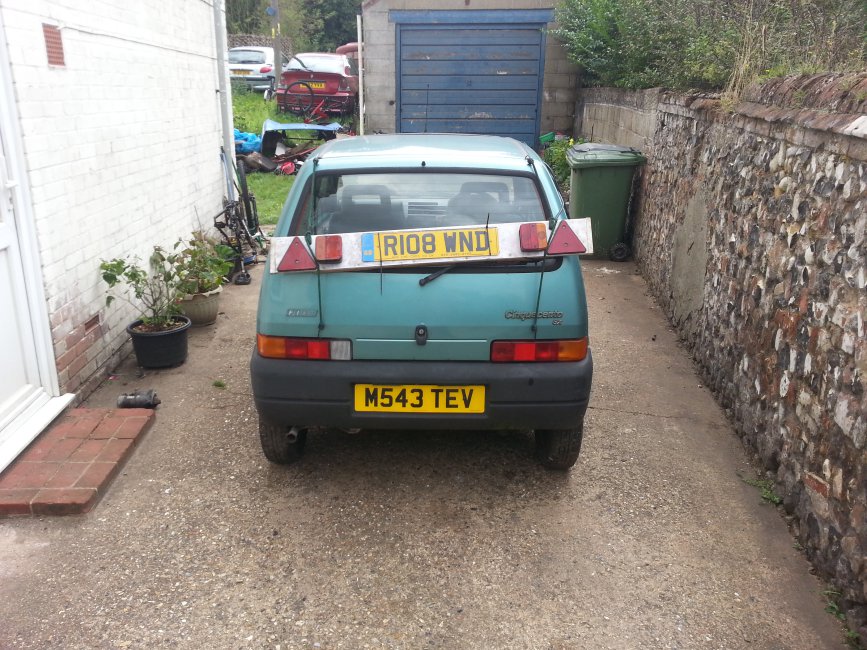 He was originally a cat d write off when it was just a year old.. he narrowly avoided the crusher, saved by a guy that I bought him from.. he needed a new slam panel, new bonnet and bumper, a headlight and a rad, so the guy repaired him.. and put it to one side (the back of his garage) for his son to one day learn to drive in.. soo.. the time came 5 years in fact.. the son didnt want the car so it was rolled outside and left for a year, then some guy at work came up to me and said his old man had a cinq like mine that was mint and would probs sell for scrap.. 3 months later I went to have a look and the guy wanted £120 for it... I told the guy id pay 100 tops as it had been sat about.. he said no.. I left.. end of.. 6 months later.. I called the guy again.. this time he said £100 so I siad id go and have another look... I offered him £80 and he point blank said no.. so I agreed £100 with him and said id be back in a week.. later that week I went back.. and said id take it away there and then for £80 he got rather pissy and then agreed to let it go.. so heres how it looked And then there was the engine bay... there were spiders in there the size of my hand... and cobwebs everywhere.. And a pretty beasty scratch... no idea hoe that got there.. And a couple of stone chips on the roof...

And some foliage in the window seal... A few spots of rust unfortunately.. and a rather odd outwards dent behind the rear seatbelt mounting skin.. no idea how youd even do that lol All the usual cack you get with cars that have been sat up forever... I originally bouth this to practice using my duel action polisher on.. and then to cut up after for a trailer...but after a little closer inspection ive decided.. its way to good to cut up... no rust underneath.. sills are near perfect.. no rust in the boot.. carpets are pretty clean.. roof liner is perfect and he even has the cardboard sunroof cover in perfect condition..

Just a few little bits of bodywork to tidy up but all in all a little gem.. apart from the mint green color.. but its growing on me..

First job was to strip the aweful green interior that smelled like it had been sat in a field all its life.. And was greeted by.. But a quick hoover and wipe.. And in with the new interior..

Nice clean rear bench that was in storage from imola.. I Also fitted an uber clean set of door cards from a sporting however no pics...