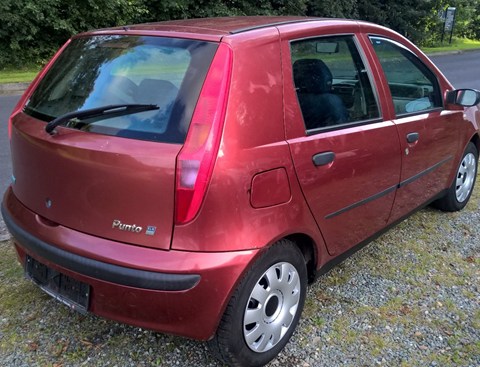 Well, there is a story to everything...

For many years I've been driving Alfa's and Citroën (the real ones with hydaulics, not the new caffelatte-designed Peugeot-Citroëns)
Having an Alfa 156 2.5 V6 and a Citroën Xantia 2.0, I was like paying a lot of money to the oil-companies and an awfull lot of money to the Danish Govenment in penalty-tax'es.
The Busso V6 is slightly broken (exploding waterpump) and I'm using that to take the engine apart and doing a lot of nice things to it.
Engine, cabin and more.
But thats expensive and takes a lot of time (a looooot of time...).
I'm really happy with the Xantia as a practical donkey and it's extremely comfortable.
But as an everyday car, commuting to- and from work, it was bloody expensive, drinking petrol and oil.

So I more or less swapped it for the mentioned Punto.
The Xantia was absolutely rust free !
The Punto is not rust free..., as it turned out
Most things seemed to work on the Punto.
On the Xantia I broke the internals of the drivers door, so it couldnt open the window and I had to use a separate key for locking/unlocking.
A couple of months ago, the ABS on the right front broke.

Wanting to save a lot of money also, I startet out looking at Cinquecento's.
I really like the square look they have
Having tried some, I found out, I would only go for a Sporting.
The 0.9 was terribly, terribly slow, but the Sporting was ok-go-cart-like.
Thinking it over for a couple of week, I desided it was gonna be to small and my feet are simply just to fat

And I must admit to being a 4-door man

So looking for economy, 4-doors, amble cabinespace and bootspace, the Punto came in to play.

It was'nt a first contester.
I absolutely hate the rearend design on the Mk1's and I hate the headlight design on the new Punto's.
But the Mk2 Punto's are somewhere in between...
Not perfect, but almost somewhat ok... 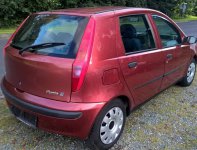 Looked around for a while, but not that many for sale.
Found two ones.
One metallic blue and a bit to expensive.
One metallic red and very cheap...

Both of them placed many hundreds of kilometers away, so going to look at them and try them would take almost a complete weekend and a lot of money.
Writing to and from the dealers for several days.

Finally setling for the metallic red.
The color does a good job in hiding/integrating the hideous rearlights, but also makes the car look a little "old man driving".

Well I'm not that young any more :-D
And swapping the Xantia in, it was gonna be very cheap

So the other weekend, my son and I took off in the Citroën and drove west for many hours...
Arrived at the Punto and found it to look more tired than on the pictures, more dented here and there and a tired paint in general.
Given it is 6 (!) years younger than the Xantia, it looked actually older
But mechanically it looked pretty much ok anyway, and sounded ok to.
And everything electrical worked !
So finally swapping the cars and we drove of in the Punto !!! 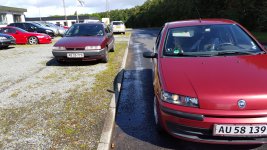 Thats how the Rosso Scilla became the new member of the familly.