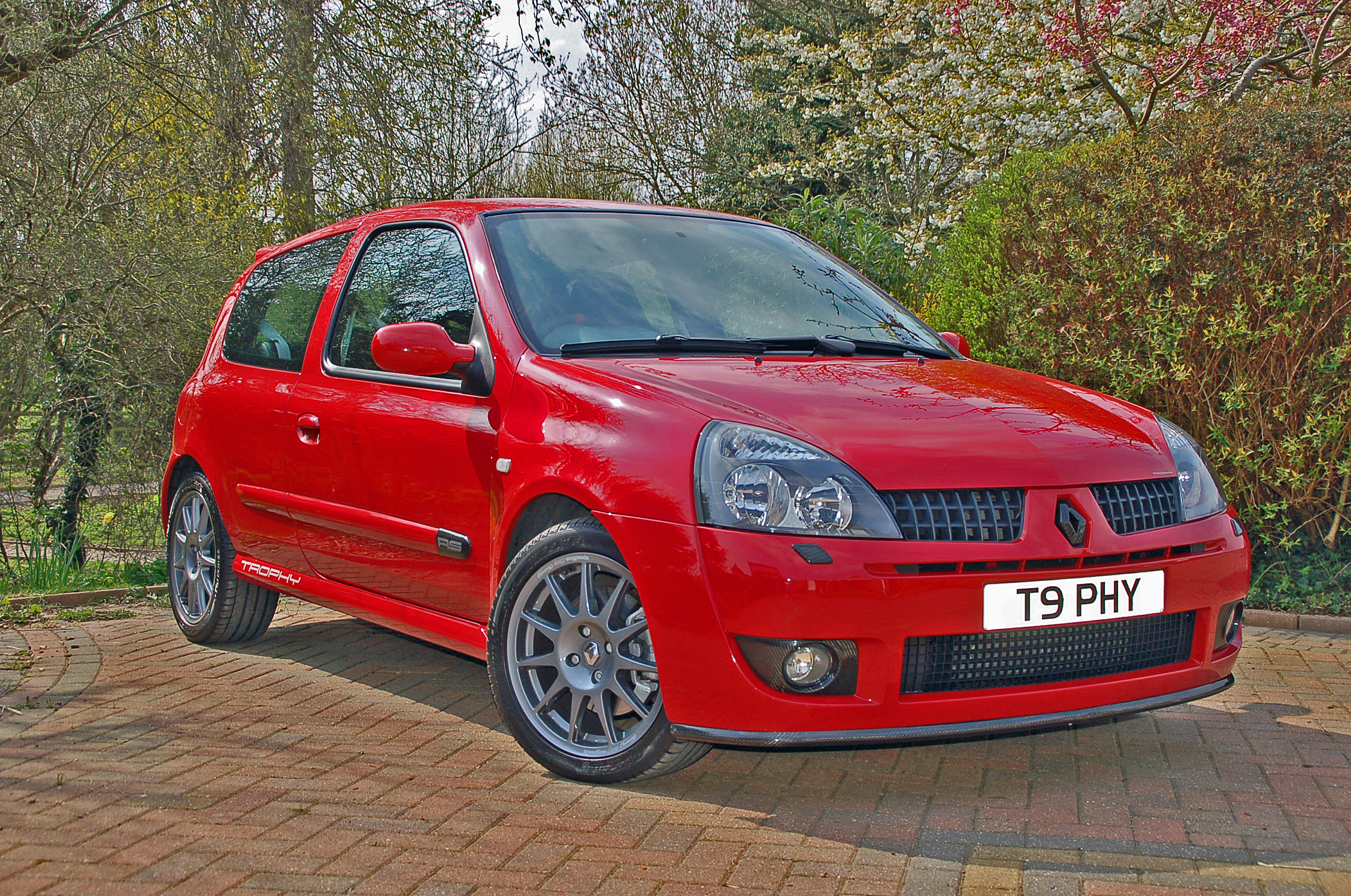 I've had my RS Clio Trophy now for about 6 months, but today was first time I got round to taking some pictures as it's still clean from the RS meet at Gaydon yesterday.

For those who don't know about the Trophy it was the run out model for the 182 and in celebration to the success of the RS Clio products it was fettled to produce a very raw and incisive drivers car.

It lost the automatic HID headlamps and automatic wipers of the normal Clio 182, getting the normal headlamps (saving 10kgs) and manual wipers. Lost the rear split fold half leather/alcantara rear bench with 3 headrests to match the standard RS fronts, but gained Recaro Trendline front seats and a base 'Campus' spec one piece rear bench with no headrests.

It also lost the full climate control to be replaced with manual air-con again saving some weight.

16" Speedline Corse Turini's were fitted with 205/45 Michelin Pilot Exalto (PE2) which depending on where you read were developed specifically for the Trophy, or the Trophy was a bench mark car used by Michelin to develop the tyre along with the Porsche GT3 of the time among others.

And this is where it really differs from other Clio's and in fact most, if not all hot hatches. It was fitted with Sachs Motorsport remote reservoir front dampers costing some £1300 each from Renault. These have much thicker damper rods meaning less flex under heavy braking keep geometry more true at front. In fact the rods and many components were exactly the same as used by Jason Plato and Mat Turner in there 2008 Seat Leon TDi BTTC cars and being motorsport dampers are rebuildable, which mine have been done by BG Motorsport @Silverstone by Ben Fricker the damper technician for the BTTC cars. They are once 'un-pinned' fully adjustable as Renault had them pinned to one setting. Rears are Sachs units but standard damper design and not adjustable. Eibach springs finish it off. Jean Ragnotti signed off the car after its development work.

I've added a few items to my car, the standard HU is base spec 4x22W, now it's the 'Cabasse' 4x40W unit fitted to 182's, it sounds way better. The parcel shelf is a genuine Renault accessory with inbuilt 2x6" full range and 2x tweeters and strengthened to take the extra weight meaning the car has 10speakers if you count 4 tweeters separately. the front splitter has been changed for a Streamline Carbon item, the fog lamps surrounds are from them as well. The front and rear diamonds have been covered in genuine 4twill carbon fibre and gloss lacquered, as have the dash and steering wheel inserts, plus the front washer blanks where HID equipped cars have headlamp washers fitted. Rear bench changed to split fold leather alcantara from 182. Gear-knob is Richbrook which is near identical to Swiss market Trophy's UK models got standard knob.