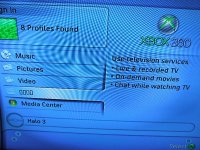 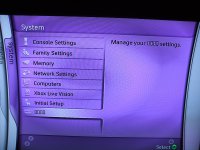 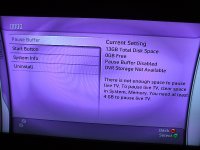 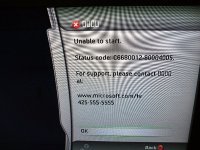 Update: We just learned that Aaron just got his 360 back from Microsoft repair this week. We also know that his dash version isn't any different than the one that is already out (2.0.5787.0) leading us to believe that his 360 doesn't have the Fall update. But the new options are definitely related to the IPTV service as more options were discovered in his 360's settings. Need proof? Check out the two new screenshots we just added.

If the sweet, juicy, rumor friendly screenshots that we just received via our tipster inbox hold any water, then everyone can look forward to IPTV being part of the Fall update. Though, remember kids, this is all filed under the "rumor" tag ...

The two four screenshots you see in the gallery below were sent to us by tipster Aaron, who says that he turned on his Xbox 360 today and noticed a new TV icon with four text squares in his media blade and was wondering if we knew what it was all about. We investigated and noticed that this new TV icon option wasn't normal and replaced the "Video Marketplace" option that we see on our dash. The second thing we noticed was that, when hovered over, the description for the mysterious TV icon option reads:
Use television services.
Live & recorded TV
On-demand movies
Chat while watching TV

Sounds like IPTV options to us. Once clicked, an error message pops up stating that it was "unable to start" and to contact support at www.microsoft.com/tv. That URL will take you to Microsoft's Mediaroom website ... also interesting. So, if everything is legit in these pictures and Aaron doesn't end up being a Photoshop God, we're going speculate that this random occurrence is related somehow to the Fall update. The square text boxes, error message and overall un-ready status of the dashboard option all smell of a Fall update that isn't yet ready for the masses. Maybe Aaron was online at the right moment when an Xbox Live engineer tripped over a cord sending Fall update goodness to his 360. Who knows. We'll try to get more information about this odd occurrence and ultimately find out if these screens are real and relate to IPTV or the Fall update. Until then, file everything into the rumor section of your brain and give the screenshots a look over.
Click to expand...


ps check out that gamer picture

What I don't understand is why it keeps referring to me & my now repaired 360, there's nothing wrong with mine & never has been since I bought it ????

thats cos its sickly green :yuck:

How did you know, I don't think I had posted on here before, but yes I bought a Halo Edition 360 cos I was marketing mans dream, saw it wanted it.........

All I need now is a GT5 Edition Playstation 3 to complement it, well if they make one that is
OP
OP


that and jamie has a big mouth

custard said:
didnt you know i have a cross reference of FF members and 360's sold


that and jamie has a big mouth
Click to expand...

Lol that will be it then and Mr Bigwood. I also had to buy the Halo 3 Spartan wireless controller just to keep your database upto date
OP
OP

didnt get one of these though

LOL no, I did think about it and thought I had more than enough ltd ed stuff so stopped myself!
OP
OP

green le xbox 1's are where its at

custard said:
green le xbox 1's are where its at
Click to expand...

Well my X-box 1 isn't green, but I did have a champagne reception for its launch on London Eye and a few nights in Waldorf Estoria as I worked for MS at the time. I got a free one at end of it with 5 titles and two pads to take back home, so I couldn't complain too much. Ah those were the days of MS expenses & freebie's

Turns out those images of an Xbox 360 with IPTV were legit. In a statement issued by Microsoft, the Redmond-based company acknowledged that the IPTV features "were inadvertently exposed while the customer's console was being serviced and is unrelated to the Fall Update."

The IPTV features, according to the statement, are part of the Microsoft Mediaroom services and will be made available to service providers by the end of this year, adding that it will be up to them to decide when the service is deployed.
Click to expand...

Full Story: joystiq.com
You must log in or register to reply here.