First attempts at cross wind landings today, really rather a lot to learn in a very short space of time. Apparently landing in 13kt side winds is not far off the limits for a Cessna 172, but I really enjoyed myself.

Now being threatened with my first solo soon

Just got back home from Maine after another 13 hours in the Jeep with my wife and grandsons. I drove just about 2500 miles in seven days. I'll have to run the Jeep to the car wash in the morning to wash the early winter off of the outside and the honey mustard off of the inside. On the plus side, I get to sleep in my own bed tonight.

Woke up to a white world this morning, just a light covering but all white.

I think I've talked about this before but it's worth mentioning again for those who may not have seen my historic post. Our house, built nearly 40 years ago, still had it's original wooden windows and several of the double glazed panes were "blown" with condensation between the panes and rot in several of the frames so they didn't seal properly when closed. Last year, maybe 18 months ago, we decided to replace all the windows with modern plastic ones, upgrading the spec of the double glazing at the same time. We got a few quotes and were dismayed at how much it was going to cost so decided to put things on the back burner for a while. However, shortly after that one of our neighbours was having a conservatory reglazed (taking out all the plastic roof panels and replacing with glass and other updates) I was watching the chaps (an independent small joinery business) doing the work and they really looked like they knew what they were doing, keeping everything neat and tidy as they worked (always a good indicator in my view) and, when I looked over the garden wall to their rear, they were making a lovely job of it. Their van advertised double glazing as part of their business so I asked them for a quote for my windows and they came back to me about 3 days later with a very good quote indeed. So What make of product will you use I asked. Kommerling was the reply. Well, I've never heard of them so I said so, to which they replied that they've been installing that product for some time now and consider it to be towards the upper end of the quality scale. We decided to go with them and the result has been really excellent. The windows feel really solid with a very nice latching action when you work the handles and they seal excellently - I couldn't detect even the slightest draught on any of them during the recent storm. I would also rate their sound insulation as above average. Both of my boys houses have plastic double glazing, one only about 3 years since install, and The Kommerling is definitely superior - no kidding! So, if you're considering double glazing I can thoroughly recommend this brand: https://www.koemmerling.com/en/products/

With the new glazing installed I've been systematically trying to improve the "heat leakage factor" of our house. Our walls are cavity type with outer facing brick then a small cavity then foil faced polystyrene insulating sheet fixed to the inner block work so very good for insulation. Our front and back doors are really solid wooden jobbies so I've installed a double seal all round them and even fitted key plates which stop air being blown through the key hole. The front door also has an inner door (vestibule - so a bit like an air lock) which I've also installed a seal on, the hall keeps toasty warm! The back door opens into a small utility room with a separate door to the kitchen so I've insulated that too - basically I've created an airlock at each outside door.

Just before I started thinking about renewing the windows I was up in my loft and noticed that the "blown in" loose insulating flock, which the builders had installed at original build, had settled quite a bit and was now only barely the depth of the rafters. I bought a whole load of glass fibre rolls and doubled the thickness of insulation then installed spacers and floored about half of the loft area. The hatch into the loft has always been smaller than I'd like so I ripped out the original uninsulated plywood one, enlarged the hole and installed a fully insulated one. My current project is going round the downstairs floors, especially around the skirtings - all our floors are suspended with air bricks under the ground floors - and trying to eliminate any draughts (not that I'm actually finding many).

About 5 years ago We had a new condensing boiler fitted to replace the original build, very reliable but inefficient, boiler the builders had fitted. I put a lot of thought into how I was going to manage the heat output to the house and decided to do away with the adjustable thermostat in the core of the house and install separate thermostatic valves on each radiator. I keep the spare room radiators on "ice guard" unless people are staying and the downstairs radiators on around 2.5 with the living room on around 3.25. The boiler timer turns the boiler off when we are in bed. This way the radiators individually monitor each room's temperature and cut in and out as needed. What actually happens is that the upstairs radiators rapidly heat the upstairs rooms at start up and then go into "top up" mode as the heat from downstairs rises for the rest of the day.

By taking these measures, and doing things like boiling only the amount of water needed each time in the kettle and cooking things all together in the oven at the same time etc, etc, we've almost managed to halve our utility bills. So, looking out the window this morning at the snow on my neighbour's roofs I realized most had patches where the snow had been melted by heat leaking up from the house. I popped my boots on and went out for a look at mine. I was disproportionately pleased to see an uninterrupted even covering of snow over my entire roof, both front and back. Feeling smugly very pleased with myself!

I think I've done all the stuff I can which will have a significant effect and now I'm just "tinkering" really. Anyone done anything differently or like to suggest something I've missed?
C

Well, I got the rundown of everything I did wrong on this trip from Wifey, from what I said and how I said it to voicing my dislike for hotel breakfasts and mentioning that the grandsons spend too much time on screens. Nothing new as far as I can see.

My youngest grand daughter had been wearing a headband with Baby Yoda ears. She put it on my head, looked at me, and said, "You can't be Baby Yoda because you are old. You're Yoda.
C

Well below freezing here in the Chicago area. I mentioned in another thread that one of the thermostats bit the dust on the water heater that provides heat in my garage and replaced it with the one I took out. Walked into the garage this morning after giving the unit 18 hours to do it's thing. So nice to work without having to wear a jacket. Also nice not to grab an ice cold tool and have it stick to your hand like a tongue to a frozen flag pole. 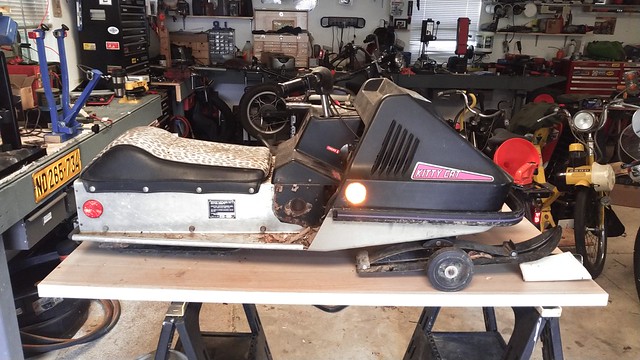 Is flag pole licking a thing in the Chicago area?
An olympic sport for the future, perhaps.
C

portland_bill said:
Is flag pole licking a thing in the Chicago area?
An olympic sport for the future, perhaps.
Click to expand...

Only on Triple Dog Dare.

The traditional game on the hill next to mine of who can fail the hardest when climbing it in the snow..

The road you're on is covered..so you decide to climb to the highest point in the area rather than take one of the two other lower options.

Sometimes it ends with a graceful slide backwards..sometimes especially on a 4x4 all 4 wheels spinning ends up with a slow shuffle sideways into a hedge as it slides off the crown of the road and very occasionally it ends in the field.

I got the new Predator engine mounted in the Kitty Kat this morning. 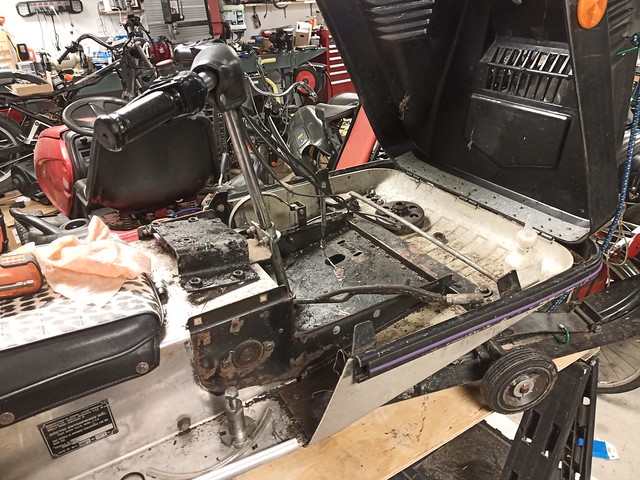 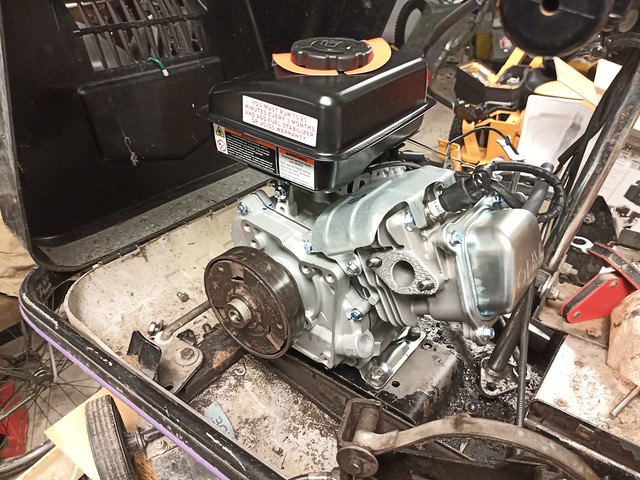 Drilled four new holes to mount the engine plate... and they all lined up. 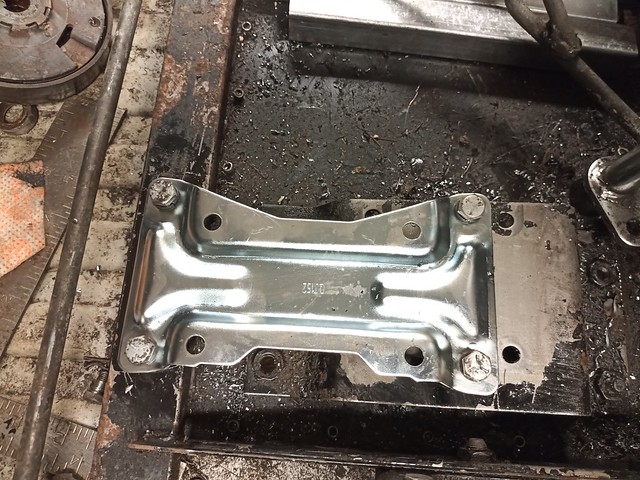 Even the drive sprocket lined up with the driven sprocket. I'm imagining my next post on this will be in the Grumpy thread because this all went too easy and there is a major clusterf*** that I missed.
You must log in or register to reply here.