seriously, is he meant to be a joke character - or does he take himself seriously?

Was quite happily listening to radio one and now tim is on, so i've had to put a cd on.

Location
in your dreams 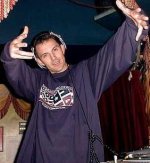 Tim Westwood, You are a plonker :yuck:

Location
in,on,or lookin at a Fiat

so there really is no point, just comic relief and inspiration for Ali G ?

Tim Westwood apparently doesn't speak to his mother in his "bad ass" manner. He is reported to address her not as "mi bitch" but as mother and speaks with a typically English accent.
Click to expand...

I agree... you have the Essential Selection - probably the best thing on Radio 1 - followed by this complete and utter muppet wannabe gangsta bender who can't talk in a normal voice or leave the f***ing sound effects button alone! Plus 99% of the music he plays is utter gash... :bang:

How about we start a petition: Sack Westwood and extend the Essential Selection for another 2 hours... :spin:

I love the way he tries to give his gangsta lifestyle shout outs to kids doing their homework. Went for a drive tonight and heard this

"Yeah big shout out to Mark P doing his coursework. Yeah getting out of this mess"

No, his mum's told him to do it

he's that tw*t that does that "pimp my ride" programme. completely ruins that.

I even took the time to write a nice long email to the guy once, telling him how much of a Tw*t he really is. I never got a reply though
S

KoArAnG said:
I even took the time to write a nice long email to the guy once, telling him how much of a Tw*t he really is. I never got a reply though
Click to expand...

his personality got in his way or is that arrogance.
OP
OP
A

JonnyBoy said:
How about we start a petition: Sack Westwood and extend the Essential Selection for another 2 hours... :spin:
Click to expand...

Pimp my ride US version is good, the UK version isn't - mainly cos westwood needs to realise he aint xzibit!

He is a fool- always has been a fool.

xzibit is asstastic too.. all that gangsta crap is a bit gay anyway.

but i'm shocked at readin this post to be fair... i never knew people got that wound up by him.. i simply assumed it was a big radio one joke that's run a little too long... the guys like some old dude sounding like a 14yr old rude boy... how can you take it seriously... i never contemplated it would actualy be real..

they could do to know him off air though, cos i can't stand hearing him doing his "shout outs" "you're listening to the sound of the UK underground..drop the bomb"

it's about as underground and britney spears...

All of the above i agree totaly and this is the so called New comedy :yuck:
Laural and Hardey come back all is forgiven

Hey Xzibit is cool, He makes good rap tunes (paparazi (sp)) and hes actually funny on the US Pimp my Motor.

I don't know what Tims game is, he pronounces all his T's and TH's very proper... then he busses out with a phrase like "Mad Flavour" or "Crazy Heat" or "Crazy Big Advertisement"

Is he intentionally trying to take to whizz or is he that daft?

Even my youngest daughter knows him as 'w**k*r westwood' after the UK pimp my ride.

I remember hearing that he got punched by the rapper Kurupt on air because he was abusing Suge Knight - real gangsta
You must log in or register to reply here.

tim westwood at the movies