The Land Reform Bill for Wales petition Consequences for all inland water users.

The Welsh Canoeing Association (WCA) are currently lobbying the Welsh Assembly to introduce a Land Reform Bill for Wales which would give the right of responsible access to the open countryside and inland waters of Wales. The power to introduce such legislation was transferred from Westminster to Cardiff last July, and we are currently in a position where Assembly members are seriously looking at the WCA proposals. If passed the pressure would greatly increase on Westminster to follow suit for England.

Although the law regarding access to the countryside in England and Wales was recently clarified through the Countryside and Rights of Way Act (2000), this, however, did not include inland waters. As such water sport enthusiasts often face uncertainty as to their legal rights when utilising non-tidal waters. There is no guarantee that a canoeist, for example, will not be committing an act of trespass by simply traveling down a river where they have not obtained permission from all those who own land along the stretch being paddled. Introducing a Land Reform Bill would remove such uncertainties and allow all to enjoy their natural heritage rather than making it the preserve of a privileged few

If you support idea of a Land Reform Bill for Wales, please sign the online petition at http://petitionthem.com/default.asp?sect=detail&pet=2856. The Government of Wales Act (2006) requires the Assembly to act on petitions received if an issue falls within their powers so, if we get enough people to sign, this petition can make a difference .The Welsh Assembly have confirmed that signatures from anywhere in the world are appropriate, so please sign up. It only takes a matter of seconds. Similar lobbying helped in getting the Scottish Parliament to pass the Land Reform Act (2003).

Many thanks for your support. For more information please visit http://www.canoeingisnotacrime.org.uk.

The Canoeing is Not a Crime team
Click to expand...

Its really an issue for all inland water users, but the support of other people is needed to get them to see that people care, and want to have they're opinions heard.

Here in Scotland, i now know i can turn up and use any waterway as long as i do so in a safe and responsible manner, and i would like to think it should be the same in England and Wales.

Go on, save the punto and the canoe! 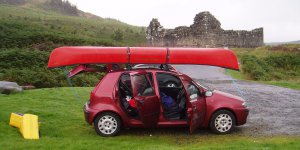 just got back from tyne tour 07, my 3rd one. and defo the least organised slowest, most faff induced, slow affair yet

almost got 'some' paddling done. AND I got to wrap one of the uni's old massive open boats round a bridge parrapit

also ended up left last one at tyne green, with a small fiat punto, and 6, yes SIX sodding massive boats to load up! managed it though :worship: pics later

Location
on the A684

Faced with several miles of shoreline... how are you expected to find out who owns what?

Having done the Dee tour a few years back I can imagine how hard it would have been to find who owns what, and what if a single person refuses permission?
Last edited: Nov 5, 2007

if someone refuses, then you've got a 1m wide channel in the exact centre of the river to use, only. otherwise you may be shot at.


or at least somebody going thru part of an estate on the river wear got shot at, and it hit them!!!


dee tour was cancelled a few years back due to access issues, and I think that little shop next to the play wave/hole on the rocks on the dee has now closed as they hired a boat to someone that wasn't capable, a more capable person dived in to save them, and they themselves drowned whilst the noob floated out untouched


its all turning into a big load of H&S bulsht. we got to do TWO fla****er sections this weekend, because we have so many beginners we didn't have enough of our own boats, so the uni hired the boats and services of the local water marina people (who we used to get one with really well), which mean't we had to be led by them. and on both days the lead fella (boss at the marina) pissed off with his mates to do other more interesting sections. leaving me and a mate (experianced, but not at leading, and certainly don't hold the paperwork to lead that number of noobs down a river of any kind) to lead the group (15!).

so on both days me and my mate lead about 5/6 out of the 15! as the 5/6 had previous experiance and had showed they were pretty competant. meanwhile the rest of the group sat around on tyne green (campsite) for the whole weekend getting very cold, and VERY fed up!

so yeah, yet again H&S and people not doing the job they were paid for = killed the uni paddling club :bang:

oh and hellcat, for the sea there ain't much problem. its just getting in and out!.

TBH I prefer fresh water. as in the sea there is so many weird currents. I don't just mean drift and wind and tides. but just the turbulance and un-predicactable bits are lethal! you get hoiked all over the place!
kayak surfing is where its at! much more fun than normal surfing. and with the addition of home made metal fins (plastic ones shattered) you can make them pesky surfers get out of the way too!
You must log in or register to reply here.

New battery for the Punto.
2