Had a problem for a long while with not 100% brakes. Problem is now worse after doing the rears.

Put it down to various problems and my inability to bleed properly I have tried manual, 2 and 1 man, and pressure bleeding.

I noticed for the last few times when i put the eezibleed (pressurised bleeder) on the reservoir, i get leaking around where the tank joins the master cylinder. Last time i tried, i dumped a load of fluid on the drive lol

It may just be down to the pressure of the system, but this may be highlighting my long term problem. 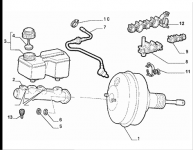 It looks like these seals are part of the master cylinder....can anyone confirm?

I was thinking though....the ABS versions have same booster part number, but MC is different. Anyone know if it is bigger? 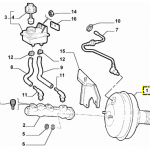 It would be a bit more work to install, but would be compatible with the servo and looks pretty much the same design. if it would be better..not a clue lol

Smaller capacity n not worth the trouble. You could look into whether a bravo master cylinder would fit, or punto 16v as it could be a bit bigger.
OP
OP
R

smaller capacity, thats good to know....put me off that idea

I was looking at what turbocinqy is doing in his thread, fitting a barchetta one, but I'll see how that turns out first.

the punto ones seem to come as on part, servo and MC, from fiat at least, and are a LOT more money.

If one will go in without too much trouble though it could be ok if i get it second hand, but looks like i will need to rebend the hoses, which will be a pita job.

kritip said:
It looks like these seals are part of the master cylinder....can anyone confirm?
Click to expand...

yes. i replaced my MC when i did rebuilt my braking system. The res just "sits" on the MC and is pressed into the seals. It's a biatch of job when the seals are new!
OP
OP
R

lol, seems like a rubbish design if im honest....maybe i can just try pusing it down some more and get back a good seal otherwise i'll swap it out. Doesn't seem a long or difficult job.

I would have thought most cylinders would have the pipe connections in similar positions but the mountings would differ?
I bet there's a big master cylinder upgrade just waiting to be found and your the man..??
A

not really, its not pressurised.. so the seals do the job well (most of the time!)
A

cc1 said:
I would have thought most cylinders would have the pipe connections in similar positions but the mountings would differ?
I bet there's a big master cylinder upgrade just waiting to be found and your the man..??
Click to expand...

i don't think it needs an upgrade, i run the same brake setup and cannot fault mine!

I agree with Arc, it doesn't need upgraded and I am more than happy for anyone to try the brakes on any of the Cento's we have and find fault with the brakes, they are brilliant and we didn't need anything other than OE spec parts to make them feel firm, stop the car very quickly, and not fade with abuse.

We changed master cylinder on the Cinq as the one we had was well past it, easy job with no obvious pitfalls.

Just stick a new m/cylinder on as your probably getting flexing of the seals.
After fitting my new rear brake cylinders (cars done 65k), I noticed allot better braking and harder peddal.

Easier way of bleeding than pressure (for the reasons your drive has suffered) is vacumn.
You will need:
2 half car lengths of windscreen washer hose
jam or coffee jar

cheeqic_nto said:
Easier way of bleeding than pressure (for the reasons your drive has suffered) is vacumn.
You will need:
2 half car lengths of windscreen washer hose
jam or coffee jar


If that works it's awesome!

Glass jar with metal top.
watertube for the screenwasher.
2 spare connections of a model airplane tank.
sealed it with a small ring of sillicon fuel tube and a bit of cyano glue.

That is a cool idea, and if it works, brilliant....but I'm not running an engine when on stands though

I could ramp the front, but to get to the rear would still need stands, and i don't trust it. Plus the hot exhaust, and brake fluid doesn't site well with me....worse than petrol thats for sure.

I've done it loads of time, it's dodgy as the car starts as thats when there is most vibration but it's all good after that.

The system works only one problem.
It sucks a between caliper and bleeding nipple so you can't see if it's air out of the system or false air.

Maybe a small O-ring to seal it a bit around the nipple.
OP
OP
R

the normal trick with the vacuum kits is to smear grease or vaseline around the nipple. Build it up thick and no air will bleed in giving a false reading.