I had to replace our 2009 front shocks due to corrosion, this is how I did it, hopefully if you do this it will help you?

With the bonnet closed, using some masking tape, mark the "parked" position of the wiper blades, 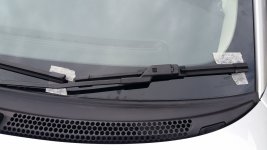 Next remove the two small plastic parts that cover the wiper blade fixing nuts, by pulling the right hand side up first of each cover,

Gently prize off the(wiper arm) nut cover with a screwdriver, use a suitable socket to remove the nut whilst holding the wiper arm, also place some covering to protect the bonnet, remove the nut and the small black spring washer underneath, place all bits in a container to keep safe, lift the wiper arm away from the screen, using both hands wiggle the arm to remove it( nut and shaft seem stainless so come of easily)
Repeat for the other arm again placing all small bits in one container.

Open the bonnet, now remove the 3 small push fit fasteners at the front edge of the trim panel at the base of the screen, whilst the fastener may look one piece they are normal 2 part ones, slide in a small knife edge or screwdriver to pull up the middle bit right at the outer edge, pull the pin up as far you can and gently wiggle the part out, place these in the wiper nut container, 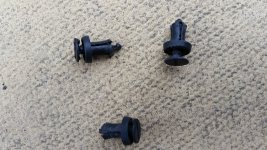 Jack up one side of the car and support on a suitable stand, simply cut the drop link connecting rod in two, note its under tension and will ping apart, I used a nut splitter to cut off the nut on the anti roll bar end, one side screwed off once I did this the other I eventually cut off with a hacksaw.
Clean up the two swivel hub bolts with a wire brush and use release oil, remove both bolts, I snapped one bolt due to the rust on the very end of the bolt, take this moment to properly clean the bolt threads, unclip the various pipes wires from the strut paying particular attention to keeping the very small wire clip on the brake pipe.

Now under the bonnet, to remove the top nut that's probably very rusted, place a piece of wood at the base of the screen to protect the exposed edge of the screen 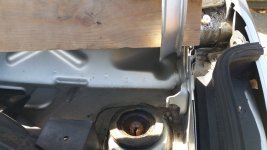 use a center punch to put a mark on the top of the nut right against the the strut shaft, use a small 2mm drill and drill down the inside edge of the nut, use progressively bigger drill bits going up in the smallest stages, careful as it can snag on the threads, once you get to about 3.5/4mm stop, don't drill down more than 25mm from the top of the center shaft or you will drill into the nut underneath that you need to re-use, use a cold chisel to split the nut in two, hopefully the strut will fall through, or you maybe able to unscrew the nut now, both states happened to me, 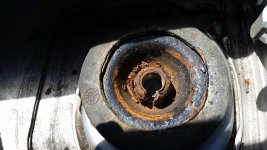 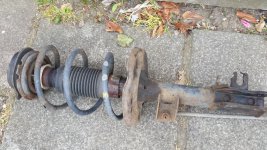 Place the strut in a vice and compress the spring with suitable spring compressors until the top of the spring is loose,
I found I could not remove the top nut which is a 27mm socket, you may wish to use other methods but this is what I did, I cut off the "free ends" of the spring with a angle grinder( those ends that were not held/beyond by the compressors) you can now slide the spring carefully over the top mounting, set aside in a clear safe area or release the spring from the clamps. 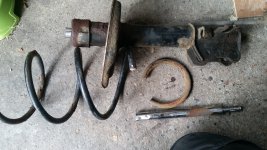 The top mount is still stuck on the top and its not possible to hold the shaft to remove the nut, I decided to cut the whole shaft/top mount off from the strut 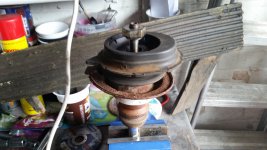 I cut two flats on the strut shaft in order that it can be clamped in the vice, now its possible to remove the nut(save nut to reuse),
clean up the rubber mounting, remove the bump stop from the spring cup, clean the cup up with a wire brush and paint it, note there should be a small hole in the cup to let out water one of mine was blocked, you can see the painted cup on the right here 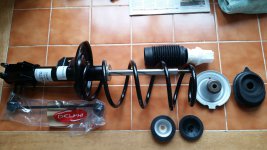 Gather all new parts together, clamp new strut in the vice, attach one end of the new drop link and secure, this is easier than doing it under the wing, place the new spring over the shaft noting the correct way(arrow) up 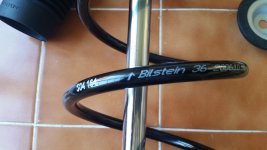 compress the spring, assemble the top mount, bump stop/spring cup/rubber mount, you need to hammer in the bump stop, use some bits of wood to hold the plastic flange and hammer on the cup 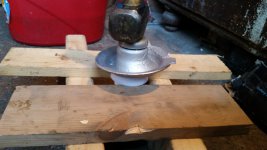 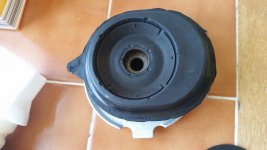 The metal tab must face outwards to the side of the car(same direction as the lower mounting with the two bolts), the arrow must face to the rear of the car when putting on the top of the strut prior to tightening, place the old lower nut on and tighten as far as you can 27mm socket, you can now release the compressors, and have a completed assembly 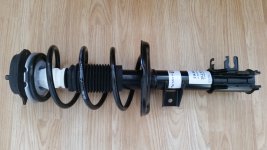 Pop the assembly back under the wing, and put the two bolts back in, nuts to the rear, tighten bolts 55ftlbs, offer up the top of the strut and place upper most cup on together with top nut, use a jack to help move upwards, don't fully tighten top nut, still using the jack connect the lower drop link fixing, replace the pipes/wires in their holders remembering the brake pipe wire clip too, put on the road wheel and lower the car back onto the ground, under the bonnet, the top nut, use a allen bit in a long reach holder, slide a box spanner over it and using another big spanner tighten the nut as much as you can, 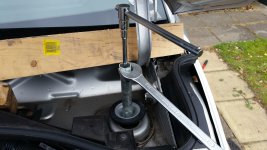 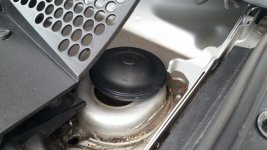 Place the trim panel back over the base of the screen, attach the washer pipes using two hands(so not to snap off the right angle), remembering to also clip the pipe into the clips(3), push the whole panel back into place to lock the rear clips in place, these go over/under the metal part not under the glass, replace the 3 front plastic fixings and push down the two outer most edges screen/A post, I broke one of the A post fixings but managed to glue it back on 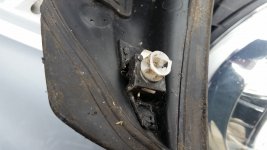 Re-fix the wiper arms back on, with the washer, and the help of your marks on the screen, put back cover panels, job done!
Allow a day per side
I hope this is useful to anyone trying this,
John

You can't go back to edit so here's a few more pictures
Top nut drilling depth guide max 25mm, note how little rust there is on the shaft(same for the inside of the nut) bearing in mind, usually, how terribly rusted they tend to look? 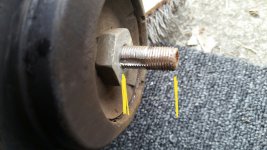 Point(s) where I cut the spring 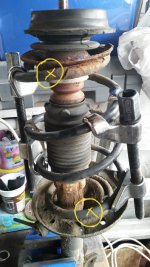 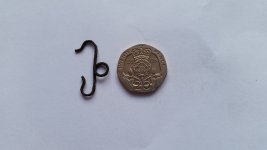 Having performed the same parts swap on an almost identical panda ,

I wondered where you were going with the drill..

I used an allen key and spanners, https://www.fiatforum.com/panda-guides/339389-panda-suspension-droplinks-front-overhaul.html

but nowadays you can use an electric torque driver , with a socket - gets the nuts off in seconds,
Charlie

Do you have a link for the cup cover?

I presume they won't be standard on a Pop model..?

Ralf S. said:
Do you have a link for the cup cover?

I presume they won't be standard on a Pop model..?

Bought some.. now just need to buy the car to go with them..

I have a 2015 'new' Fiat TwinAir with top/bottom bushings and a shock (ie. two shocks) that need replacing. Can't find a workshop manual for the 'new' Fiat models. Do you know if there was much of a change on the suspension set-up?
C

Cavo said:
I have a 2015 'new' Fiat TwinAir with top/bottom bushings and a shock (ie. two shocks) that need replacing. Can't find a workshop manual for the 'new' Fiat models. Do you know if there was much of a change on the suspension set-up?
Click to expand...

Just replaced the strut assemblies on my wife's 2011 500 and was very glad of this guide.
The top nuts were well rusted so had to break out the drill and chisel...
The drop link nuts took some time and effort too, but came off intact in the end.
One thing I did slightly differently was I left the washer jet pipes attached and just hooked the scuttle panel behind the wiper spindle which kept it out of the way nicely.
Took me about 6 hours all in and the rain held off thankfully..!

Very nice guide, took me ages to work out which way round the spring cups and strut mounts were supposed to go
You must log in or register to reply here.