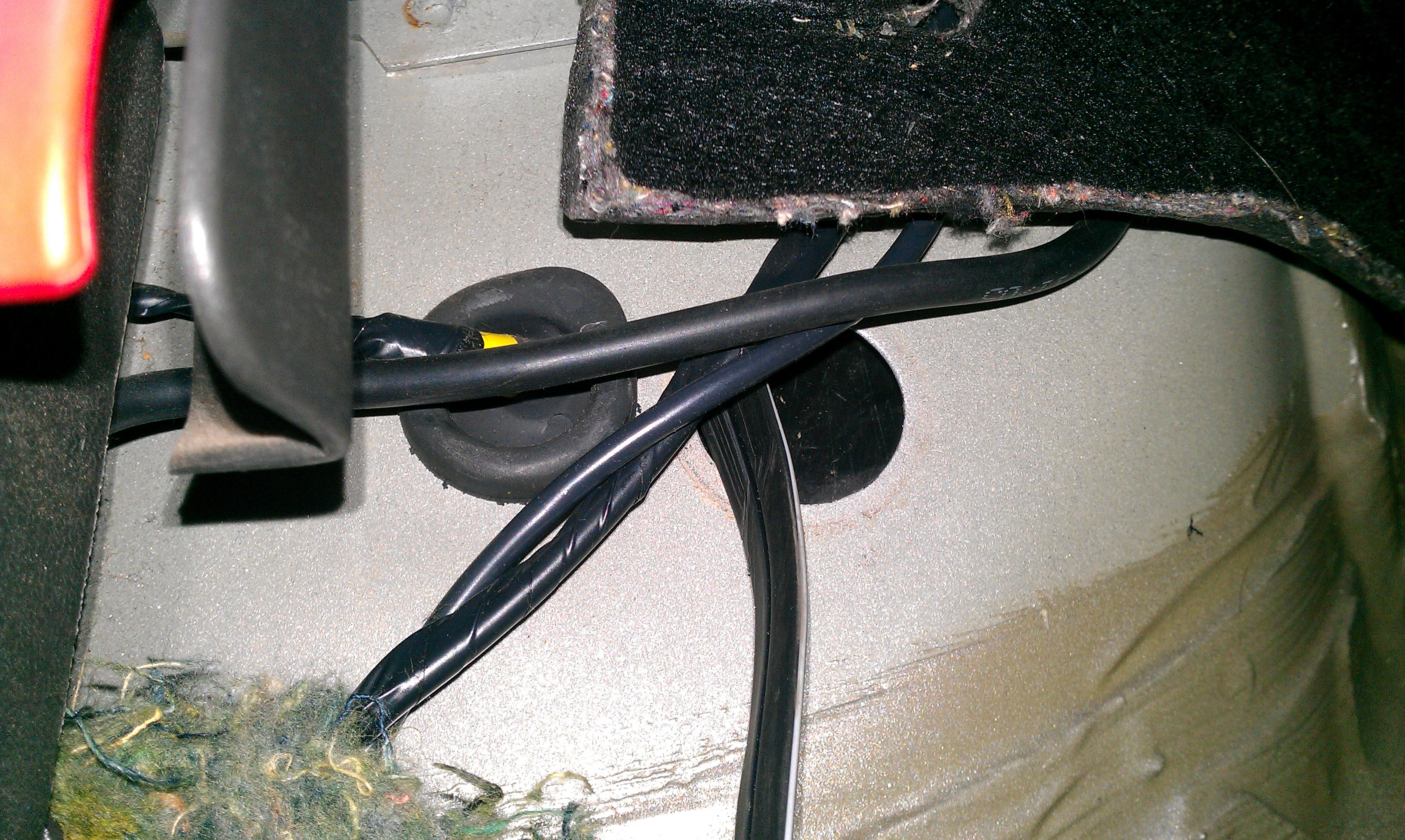 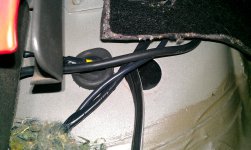 Guide Gallery Discussion
I wanted to run a bit of wire into the engine bay so I could use a solar panel to charge my battery during the day - as the power sockets only work off the ignition!
A search of the forum brought up a brief description so off I went to look for myself based on the description.

In the passenger footwell, alongside the bonnet release are two grommets in the wheel arch. Access to these is gained by pulling out the two large plastic plugs securing the carpet... The red bonnet release is in the very top left of the pic.
Alternatively, some owners have run a cable alongside the aircon drain hose, which is similarly accessed... I decided against this route for two reasons - it would squash the hose - maybe prevent the condensate from draining properly(?) and it comes out quite deep at the rear of the engine bay whereas the route I took comes out right beside the battery.

So, with the second (blank) grommet removed, I used a length of white co-axial cable to 'fish' out a route.
Pulling the nearside indicater out of the wing, I was able to see the cable fairly clearly to hook it out through the hole.
I was then able to continue feeding the cable into the wing via the indicator hole. There are then two large openings beside a black fuse box (next to the battery), I came out at the first hole... not the bestest pic but the negative battery terminals can be seen bottom right.

I secured my cable and a long piece of cord to the co-ax with tape & pulled it back through.
As you can see, I have opted for a flat speaker cable - firstly, it was a length my lad didn't need - so it was free and secondly, it is designed to take quite a bit of power to some very large speakers - so it should have no problems handling the 5w from my solar panel .
An added bonus - because it is flat, a simple knife slit was all I needed in the grommet - although I did pack plenty of rubber solution into the back of the grommet - just in case.
The piece of cord is tied to a bit of spare cable behind the grommet. should I ever need to run another wire, I can simply tie it to the cord & pull through. (saving me a job in the future).

From its position just below the top of the carpet, the cable can easily be routed up behind the dash to your preferred position - mine will come out alongside the speaker grille & rest in the glove box.
Click to expand...
M

Thanks to both responses. I have already routed the cable down the drivers side of the car so will take a look under the carpet tomorrow in the hope of using one of the suggestions made.
Still baffled that there is not an easier way to follow the main loom. It loks like a major dismantling of the dash board and controls to find it!
O

Hi Guys, I tried this route on my 1.9SX (trying to get an amplifier cable into cockpit) and had no grommets under the carpet! so managed to get a route using the bonnet release cable hole (quite hidden under bonnet) using a stiff piece of wire and lots of insulation tape. Good Luck!
You must log in or register to reply here.