You'll need to get to the wires behind the interior light and behind the A pillar. Both of these are really easy to get to. The light just pulls out; there's a slight indent on one side to make this easier.

Similarly the covering over the A pillar is only held on by 3 plastic clips and just pulls away from the bodywork. 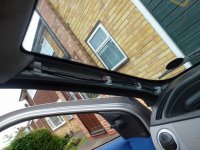 The next step is to run the wires from the footwell to the hole that the interior light is now hanging from. I found it was easier to hide the wires along the dashboard first and then route them up the pillar and over the roof card. To do this bit just line the wire up and pull at both ends. A flat head screwdriver might help to wedge it behind.


Once that's done, clip the wire in along the length of the pillar. 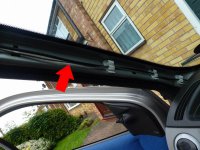 Remove the sun visor (2 screws), and you should be able to loosen the roof card just enough to hide the wires behind it and feed them through to the interior light hole. 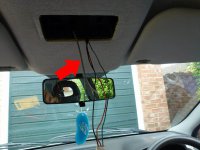 Rinse and repeat on the driver's side.

The wires that feed the interior light are set out (as far as I could tell) as follows:


Originally I was going to wire into the black and green cables, but I realised that the footwell LEDs then wouldn't come on when the interior light was "switched" to be forced on. The only way I could figure out to make the LEDs always reflect the light in the roof was to wire directly into bulb holders. 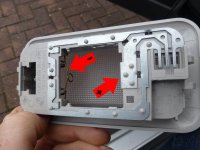 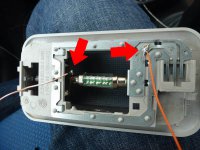 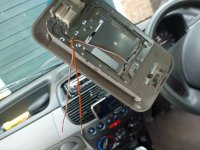 All that's left to do now is connect the LED strips to the wires in the footwell... 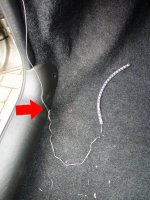 ...and then connect the other ends to the wires you added to the light (make sure to be aware of polarity).

Once all the wire is connected (and tested!) and the panels are all back in their place, just secure the strips in the footwell and hide the wiring. There's a small ridge in both sides that's perfect for tucking the lights behind, but it's up to you to experiment with where the lights point. 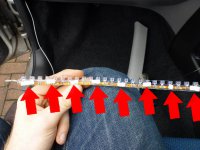 The red arrows here are pointless, I know.


I'll update the thread later once it gets dark to show how well they're working.