Guide Gallery Discussion
Throttle body experimental "dismantling", cleaning and some porting/polishing.
And building a tester (that checks the TPS and helps you to open the throttle - because in theory it is not advisable to push the flap/butterfly by hand).

It was performed on the cheap used throttle - most important, there was a plug (connector) included.
If you want to repeat the process (polishing) and make the tester - do the same.

1. ThrottlePositionSensor is located in the plastic cover. Remove 6 metal clips and you're in. 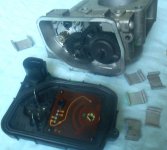 2. Flap/Butterfly is secured with 2 torx screws (these can be seized, watch out). Then you turn the throttle by hand (by the gears exposed after removing the cover) and slide the flap out. Easy. 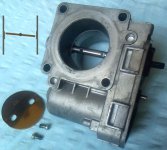 Mind the position of the flap. Edges are not square to the face, and there is a number stamped (like "85" or "86"). Watch how it is (was) oriented later, during assembly.

3. Most difficult (the very first time you do this) thing is to remove the main axle. It is locked by the small pin (and pin is secured with small aluminium plug). Drill and tap the plug, with M3 thread and pull it out (with tiny "slide hammer"), improvise.
Then flip the throttle upside-down and gently hit/tap it with some soft hammer (or something like that, plastic handle of the screwdriver), so pin should just fall out.
Next is a bigger plug, axle cap. Push (very hard) there a M10 bolt, just "thread" it into plug, and also pull it out (or again, use "impact" action). 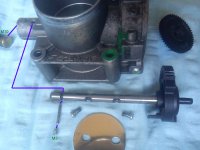 Plugs should fit back into place. You can install them back using anaerobic glue or just a dab of paint (nail polish), mostly to seal it.

4. Pull everything out. Throttle disassembled. Well done. But before removing the axle and its spring check how it was put together (take a picture, remember it). 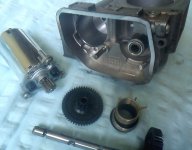 5. Good design. Axle/shaft has a real bearing, roller bearing. And deeper is also a seal. So "cleaning" throttle bodies by flooding with solvents is not a good idea. Lubricate during re-assembly. 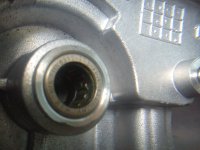 6. Rear end has a bronze bushing as a bearing. Also good. But there is no seal. Lubricate this one too. 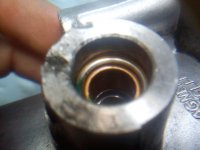 7. Fiat FIRE family engines are known for bad (or not optimal) thermal design. It's too hot under the hood/bonnet in the summer time, spoiling the engine performance. One of the solutions is a catalytic converter and exhaust manifold heat isolation (heat wrap, bands, or metal sheet shield between the cat. and engine block), intake system mods. Including throttle porting (enlarge internal diameter) or just light polishing (and removing the sharp edge inside). It helps (air flows better), engine is more responsive. 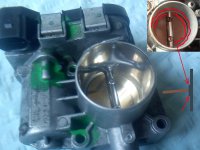 In extremely cold climate there is an opposite problem, and people make modifications the other way (to make it hotter in the engine bay). Example: https://zinref.ru/avtomobili/Fiat/000_00_01_Fiat_albea/007.htm Note, these websites can change the content completely, so watch out (for now there are pictures of modified intake, to heat up the air using catalytic converter surroundings, plus oil catch can on the PCV system, breather).

8. One warning. Do not touch the central part, where the butterfly sits in the idle position. It can spoil the engine (you will make it worst, not better). Same with the flap itself - you can (you should) polish the faces, but not edges (diameter). 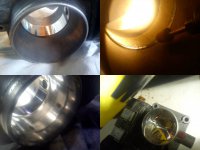 It doesn't have to be proper high quality mirror finish polishing. Just "shine" it up.

9. Internal sharp edge smoothed out, some "luster" added to the surface. Not pretty, but good enough.

10. TPS is a simple thing. Just 2 "pots" in parallel connection. They work in opposite directions, that means one is increasing other decreasing in resistance when flap is moving. That's it. 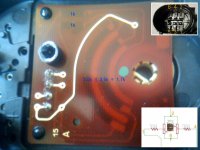 Throttle pinout is stamped (molded) inside the connector.

11. Simple tester is built around the famous NE555 timer chip, acting as a PWM (pulse width modulation) generator. Frequency (not stable, about 3-10 kHz) is in the audible range, on purpose (so you can hear the operation of the circuit). To fully open the throttle, it takes only 40-50% PWM (which "translates" into 100% TPS reading), but you can push more (so you know the throttle is blocked, seized if requires more than normal "100% TPS" to open). Switch is to check TPS1 or TPS2 (they operate opposite way, as was previously stated). Current consumption at full throttle is about 0,3-0,5 A. Not that much, but "tranny" requires a heatsink (piece of alu. sheet is enough). 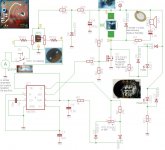 One thing to be custom tweaked is a small ampmeter (I used some old audio equipment gauge, "VU meter" or something). If you attempt to make a tester, you must be able to do this (depending what nominal current your "meter" will have, 0,1 or 0,2 mA, maybe more like 0,5 or 1 miliamps). 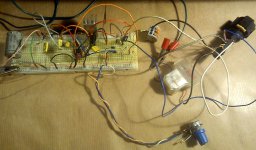 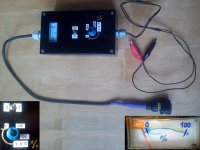 14. Using tester on the car. Forgot to mention: FIAT engines (their ECUs) will not open the throttle when you press the accelerator (in key ON position of course), like many other vehicles do. That's why you should have a tester like this to properly clean the throttle on the car (not by pushing the flap - but don't worry, it will not do any harm).

15. Flap operation. Tester is a simple one. It only opens the flap. It closes back by spring pressure/tension. Fancy professional testers can flip the polarity (yes, you could add a switch, but I'm talking about reversing polarity electronic way, not manually).

16. When installing the "butterfly", you must pay attention (position, orientation mentioned in the point 2 of this guide), and to sit properly, you must press/force the throttle to the fully closed position. 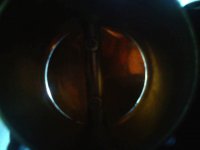 Visible gap is a idle position, fixed. Grande Punto has no "IAC" valve (some people confuse evap system solenoid with it, even eBay sellers - although faulty/leaky evap can spoil the idle).

17. Tester can show the difference between idle and real zero position (when you force it to close completely). Position "OFF" can tell also a broken TPS circuit.

18. Comparing two throttle bodies (my old and "new", experimental), there is no difference in readings. Also there is almost no difference in the performance ("almost" means, polished one is slightly better). And I didn't even "reset" nor "learn" the throttle. People overestimate this function.