Guide Gallery Discussion
You will need;

1 1/2 to 2 hours for the front spring replacement

30 mins for the rear spring replacement 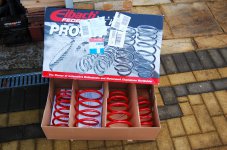 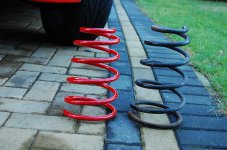 Jack up the car and lower onto an axle stand, remove the front wheel and apply a liberal spray of WD40 to all nuts and bolts on the top and bottom of the shock absorber assembly. 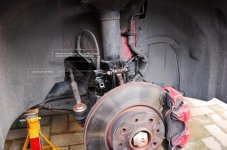 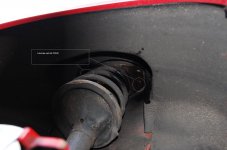 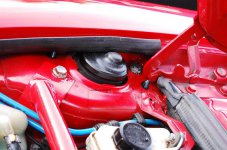 Next, remove the ABS sensor pipe and the brake pipe from the bottom of the shock absorber assembly moving them to one side so as not to get snagged later in the process.

Once the sensor pipe and brake pipe have been removed undo the nut's on the bottom of the shock absorber. 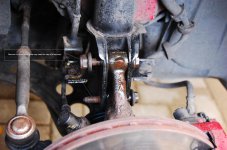 Next, apply the spring compressors on opposing sides of the spring assembly and compress the spring evenly turning one side then the other 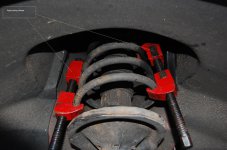 Now remove the bolts on the bottom of the shock absorber (you may need to 'help' these along with a hammer - be careful not to damage the bolt or thread). Then move the hub assembly away from the shock absorber taking care not to snag the brake line or ABS sensor. 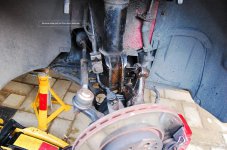 Next, remove the shock absorber retaining nuts (I suggest getting someone to support the shock from underneath at this point) and squeeze together the small plastic locating clips, the complete shock/spring unit will now pull clear of the car. 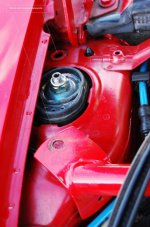 Now remove the nut on the top of the shock absorber (ensure you take note of the way the 'cap' faces first), to remove the nut you will need to hold the centre bolt assembly with a hex headed socket. Once the nut is off pull the centre 'cap' clear and loosen off the spring compressors (as evenly as possible), then remove the old spring. 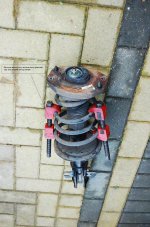 Now re-assemble the shock assembly in the reverse from the steps used to remove it. 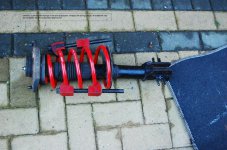 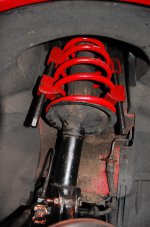 Make sure that you apply a liberal covering of copper grease when re-assembling the unit, it will ensure inhibit corrosion in the future.

Once everything is back together give every nut and bolt once last 'nick' to ensure that they are all tight and safe - then re-assemble the wheels, remove the axle stand and jack...........

Now you can turn your attention to the rear springs, I suggest asking someone for help as you will need to push the entire trailing arm assembly down using the rear wheels.......you will not need the spring clamps for the rear.

Firstly jack up the car as high as possible and put the car on an axle stand. 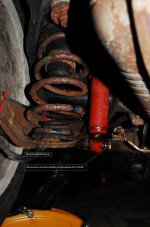 To remove the spring throw all finesse out of the window and 'screw' the spring out of its holder, at this point it will help if someone can push the wheel towards the ground to give you as much room as possible. This takes a bit of physical effort and is fiddly but not difficult.

Once the old spring is out reverse the process to install the new spring, again this is fiddly but not difficult.

The most difficult part of the re-assembly process is re-aligning the shock bolt with the trailing arm, again I suggest getting a willing friend to lift/support the wheel while you re-locate the bolt.

In all replacing the back springs should not take more than 30 mins total. 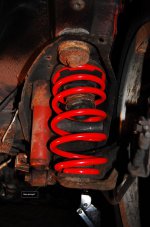