Guide Gallery Discussion
The speedometer cable runs from the back of the clocks (speedo/odometer/tachometer etc.) unit inside the car, out to the engine where it is attached to the gearbox. Access to each end is easy enough, if a little awkward! The clocks unit end is slightly easier to reach, so I'll start with that. Ensure that the car battery is disconnected, to avoid risking electric shock from any connectors. 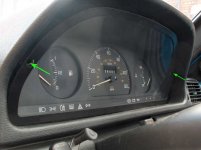 ​
To take out the clocks unit, unscrew the two retaining screws. You'll need a Torx 15 screwdriver, unless you can find a flathead or Allen key to fit.

​
Pull the top lip of the unit forwards and downwards, and once it has been rotated far enough it should pull straight out. There will be some resistance to pulling: the main source of this is the speedometer cable itself. If you can't pull the unit far enough out to see behind it, you may need to reach in and feel for the cable.

The cable attaches to the back of the unit via a plastic cover, which can be clicked into and out of place. Slide the cover back along the cable to disengage it, then it will be possible to pull the cable off the back of the clocks unit. 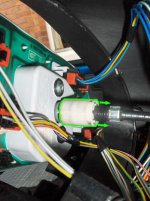 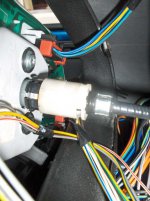 ​
The clocks unit can now be shifted to one side if you want to see the cable better. In some Unos, the cable can now be removed directly from its sheath, but it should come out easily. If the cable doesn't come out with a simple pull, then most likely it is of the other type of cable, which can only be removed from the engine end. I must stress that you don't pull too hard! This will probably damage the cable and potentially break it (I should know ). I recommend waiting until you've inspected the other end of the cable before pulling anyway.

If you feel around inside the bay behind the clocks unit, you'll notice the cable disappearing off to the left (this is in RHD cars -- in LHD I imagine the cable goes directly out into the engine bay). If you take a look in the passenger side footwell, behind the fusebox, you'll find the continuation of the cable exiting the cab through the bulkhead, via a large oval-shaped rubber grommet. This also houses the hose for the rear window washer.

Overview Inside the engine bay: the gearbox end of the cable Maintaining the cable Replacing the cable/sheath View full guide