* 10mm spanner, a ratchet spanner makes life a little easier.
* A tub of Vaseline or dielectric grease.
* A pairs of hands

1) Open the bonnet, the release is under the dash next to the drivers wheel arch, pull it towards you. 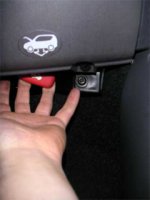 You'll need to unhook the safety catch, to do this with your right hand under the lip of the bonnet and approximately in the centre move your hand to the right, you should find a thick wire loop push this as far as you can to the right and lift the bonnet up. Use the bonnet support, next to the left, offside, wing to keep the bonnet open.


2*) Locate the battery in the top left hand corner of the engine bay. 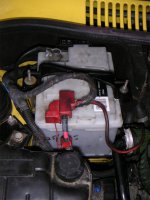 und othe 10mm bolt on the negtive terminal a few turns(not the red one!)and rmove the negative terminal clamp
then remove the red protective clip from the battery terminal & unbolt the terminal clip. Pull terminal connector off I then hook the cables behind the coolant expansion tank. Unbolt the other terminal clip and move the cable to one side. 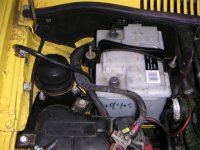 3*) Now unclamp the battery holder. To do this undo the left hand bolt about 5 complete turns, I'd recommend holding the the top of the stud hard against the edge of the locating clip so you don't just turn the nut and stud. 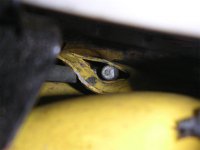 Once you've done that undo the bolt on the right hand side until you can unhook the stud. Return to the left hand nut and undo that until that side is released. Pull the clamp away and put somewhere out of the way. 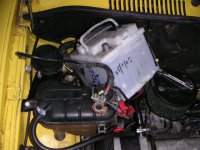 5) To install the new battery push the new battery in the way the old one came out, if you have a handle like the battery shown make sure it is down. Once you have the battery in the space it won't sit properly, pull the battery all the way forward and with feel make sure the rear is sitting in the tray and pull it back, the front will then fall into place. At this point you might want to just push the connectors on and check that the interior light comes on and/or the car starts.


6*) Clamp the battery down, I find it easiest to rehook in the same order I unhooked with, however the open section needs to be pointing forwards on the left hand hook else you'll tend to pull the hook out of the eyelet.


7*) Reconnect the battery terminals, negative, black lead, to the rear first then the positive, red lead, to the front terminal. smear a bit of Vaseline or dielectric grease over both terminals (prevents water from getting to the terminals and corroding the metals). Clip the plastic cover over the positive terminal.


8) Makesure you're not going to lock anything inside the engine compartment, close bonnet & lock the car. Job done, retire for a wet cold one.