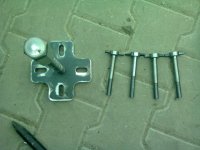 - Tool for untightening of pads retaining screw (a metal rod bended at one end at a 45 degree angle, and flatened at the bended end like a inline screwdriver)
- Pliers

First step:
- hoist the car and put it on axle stands;
- remove wheel;
- remove axle dirt cap;
- remove drum retaining screws (with the 12 fixed wrench);
- position the hole shown in the picture in the position showed by the X, and insert the untightening tool, from here is a sense thing (unscrew the nut shown in the picture upwards thru the little hole) 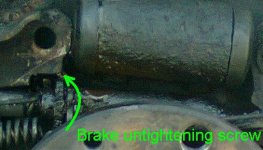 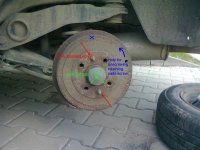 Second step:
- after you unscrew the nut thru the hole, mount the press with two screws, in the location of the drum retaining screws, making sure you only tighten the screws about 3-4 passes (else you prise also the hub and risk to take out the drum with the hub and it's not recommended :yum.
- start tightening the press screw until the drum pops out. 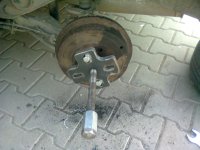 Third step:
- after the drum is off, take the pliers and remove the retaining springs shown in the picture (the long one comes out pretty hard), if you are having problems, unscrew the untightening nut a little more, that causes the pads to close a little.
- with the pliers take off the retaining clips and springs rotating them left or right, holding at the same time behind the back metal cover the pin, on what the retaining clips are put.
- after this you can remove the pads from their sitting;
- the only thing wich remains to remove is the handbrake cable: with a plier catch the hexagon end of the cable and pull outwards and then up, to slide the cable out. 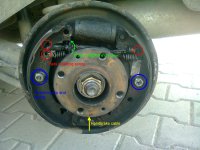 Fourth step:
- swap with new ones, put all the parts in reverse order, making sure that the brake untightening nut is unscrewed, else the drum won't slide back in;
- after the drum is on (make sure you tap on it's circumference to position it tight on the hub) put back the drum retaining screw, retighten the nut thru the hole until the brake pads touch the drum causing it not to turn, from there start untightining the nut thru the hole, bit by bit, until the drum rotates freely.
- Reattach the drum retaining screws, the axle dirt cap, the wheel and that's it.