Guide Gallery Discussion
So you want disc brakes on the back? Well there are two ways of doing it - you can either just change the hubs, or you can change the entire rear beam in one go.

Pros of an entire beam - less to potentially break or seize on you. you can leave the hubs, the brake lines, and the ABS sensors, all of which can be broken or seized, and swap the lot.

Pros of just the hubs - easier to transport or have delivered, also easier to work on assuming nothing is seized too much.

I chose the entire beam route, since I knew beforehand that the ABS sensors in mine were seized and never ever coming out. The hub bolts were also very stiff.

Up to 1 litre of dot 4 brake fluid will probably be needed, depending on how good you are. You will need a good selection of general workshop tools and something to stop up the brake pipes. a couple of brake pipe caps/bungs such as these will do: 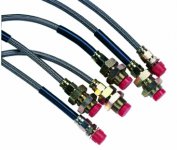 Firstly, lube everything with WD40 or some sort of penetrant spray. I did this a few days before hand on the Sprint, and it was definitely easier to work on than the Ron.

Check that you have everything you need off the donor beam. Are the bleed nipples on the brake callipers free? Make sure you don’t get any dirt in the ends of the brake pipes either- wrap em up with tape if there’s a possibility.

I’m now assuming you have jacked it up and put axle stands under the sills/floorpan. (Or cheated like me and used a lift)

Pull the springs out, might need to push down on the beam a bit.

Slacken the beam bolts. (Not right out yet!) Make sure that they will come out without much fuss. 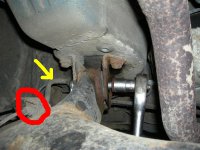 Slacken off the brake unions just past the beam bushes, so leaving the flexible bit (yellow arrow) still attached to the beam. Alternatively, you can leave the flexi on the car and slacken it at the other end (red circle).

Unclip the hose from the bracket with hammer and punch/chisel. The clip is the tab that sticks out a bit, like the red-circled one.

Undo the unions entirely, and stop the fluid coming out of the car end. I used rubber stopper caps on mine that were knocking about in the workshop for the very purpose.

ABS models – push the two bungs out of the floorpan out of the hole they are in. The left one goes at the bottom of the rear seat, the right one goes just underneath the rear seat backs, easier to see from the boot.

You will need to undo the brackets of the seats bottoms now. Use a T40 Torx. This is to gain access to the left of the floor carpet, which you will need to pull out a bit to get at the sensor wiring. 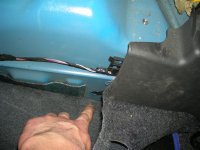 Unclip both ABS sensors at the white joints sitting under the seat bottoms. They will pull out from each other with a bit of effort.

Now, undo the handbrake cables. You need to remove the rear ashtray and take out the 3mm caphead screw: 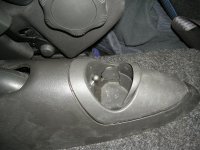 Then undo the 10mm handbrake tensioner until the whole bracket comes out. Don’t lose the round bit in the middle... 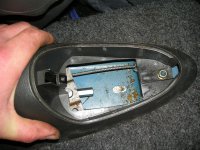 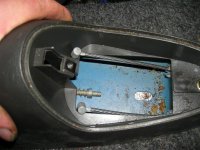 After this, push/pull the cables out from the car, help them out with a screwdriver.

So: handbrake cables out, ABS sensors out, and brake lines out. The beam can now be dropped by removing the main bolts. Its quite heavy –if you are doing it on axle stands by yourself, you may want to chock it up while you remove the other side bolt. 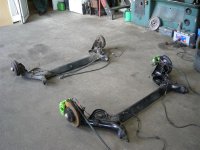 Then it’s a simple matter of doing things in reverse. Bolt the beam in, then systematically plumb everything back in. When tensioning the handbrake cables it might be a bit of a pest - leave it slack enough to spin the wheels off the ground and make final adjustments when you’ve test drove it.

When re-fitting the handbrake lines, make sure that there is plenty rubber bushing around the clip areas. It will rattle and annoy you otherwise. Mine were worn down to the metal, so I chopped a rubber tube up and did this: 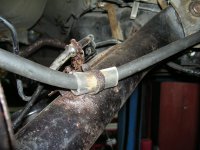 Its always good practice to copper-slip every bolt or nut that you put back in. (not brake lines, though!)
Makes it so much easier the next time.


Bleed the brake callipers.
To do this, have someone in the car work the pedal, while you slacken off a bleed nipple, one at a time. I'm not very good at describing the process, but basically you want to slacken it while the pedal is pumping, and nip it up just before it gets to the floor. This stops air re-entering.
Do this for a while until you can see no more air bubbles coming out. These bubbles are tiny, you have to look real close to spot them.
You only need to slacken the nipples half a turn to have fluid flowing, so don’t slacken them right off to find a jet of fluid hitting you in the face. At first there will probably be just air, so have patience. Before you are happy with it, you need to make sure that your brake pedal is as solid as it was before you started. Periodically check that the brake fluid reservoir is topped up to the max. 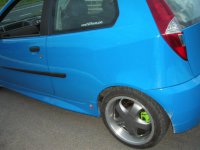 Now the male ends were all welded to the metal pipes on both of my cars due to corrosion. Am I right in saying its aluminium coated? Anyways, the way I got around this was to undo the lines as far back as the drums/callipers. Unclip each of the joints, then straighten out the pipes so that you can twist the whole lot on and off as one at the flexi-joint. You will find that brake pipe is very bendy, but don’t push it too far! I had to straighten out both lots of pipes to get the old ones off, and the new ones on.
Worst case scenario = you burst it, so you would need to either blank off the pipes properly with stop-ends and drive to a garage, or have the car trailered away, to have new lines made up.

Seized bolts
This is why you use penetrant spray beforehand but you can give shock treatment to the heads of bolts with a hammer, will help. Worst case scenario is that the beam mounting bush sleeve and the bolt seize up together, but mine might have been a one-off on the Ron. The Sprint’s ones were free enough, anyway. IF you destroy either bush getting it out, shop4parts now sell them. (new part that has been only stocked in the last month)
Others are the bottom shock bolt (usually not too bad, maybe need a breaker bar and a lot of lube if it hasn’t been off recently) and the ABS sensor bolt (which can seize completely, along with the whole sensor, and the bolt heads break off pretty easily)
Just watch that you don’t go overboard with the breaker bar. It has the name “breaker” for a reason. If a nut or bolt is really stiff, work it back and forward – 1/4 turn back for every 1/2 turn forward.

There are two different types used on Mk2 Puntos. Hgt Abs sensors all have the same connector (I'm 99% certain all mk2's are the same), the diffrence is the later rear beam (2001 on) have the shorter sensors fitted (hub end). They are not interchangeable.
Either way if your new beam/hubs has them already in, leave them and just plug them in (they both have the same ohmic reading so you'll have no issues).
[/danny]

Of course, if your car has no ABS, then you are fine. Do whatever you want with them! I would recommend using something to plug the hole left, if you remove them entirely, though.


I have tried to make this guide as comprehensive as possible, so sorry if it’s a bit wordy! I just hope someone else will benefit from it.

This guide will be updated if necessary with anything I have forgotten, or anyone else’s contributions. Sorry for the photos, when I was writing this I realised that I had taken too many of unimportant stuff and missed the more important bits.
Reactions: ChrisUK, andydg and Reuuk
Share:
Facebook Twitter Reddit Pinterest Tumblr WhatsApp Email Share Link