Guide Gallery Discussion
What will you need???

Two LED strip lights, the exact ones I bought are... Lights
Zip ties of various lengths
The smallest terminal block you can find
3 metres of 2 core cable

How long will it take???

First job is to remove the interior light, this is done by simply pulling it down from the rear, it will then pop out. 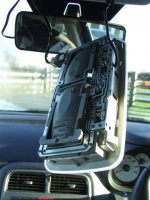 Make sure all switches are in the off position. Open the door part on the interior light from one end. 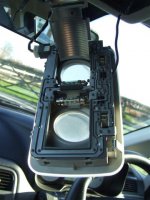 It then took me a while to establish which metal strips did what. I decided to take my feed off the passenger light bulb so connected one end of the 3 metre cable to each side of the passenger light bulb. At this stage it doesn't matter which wire is connected to which side of the bulb. So I did not have to cut any wires etc I placed the cable under the correct bit of metal wire strip. Hard to explain really!!!! 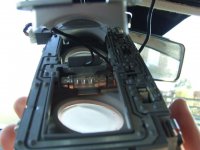 Now take the 3 metre cable and place it along the roof liner to the passenger side. It should just push up and hide in the roof liner.

You can now reattach the interior light.

Pull the door seal off from where the roof liner starts, all the way down the front of the door to the bottom. You will see there is now a gap to place the wire in (between the two red lines!!!). 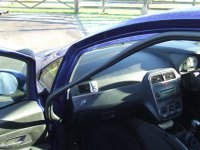 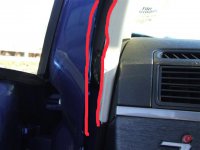 Take the other end of the wire and feed it through the gap from the door seal to the back of the glove box. Rough position shown by red arrow. 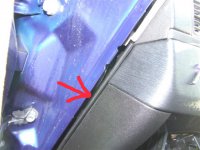 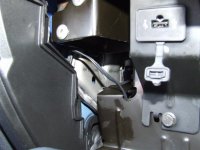 I then connected the end of the wire into the terminal block. I tested which wire from the LED strip needed to go into which side of the terminal block (don't worry it won't damage your LED strip if it's the wrong way) one will light the strip up when you turn your interior light on. Remember this.

Now position the two LED strips where you want them. I just zip tied them both in position. 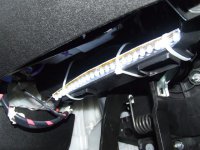 I took the wire from the drivers side behind the dashboard by removing the stereo, feeding the wire across and then out into the passenger footwell. 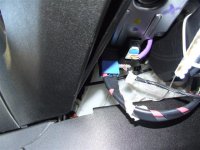 Now connect the two wires of the led strips together and place into the correct side of the terminal block.

Test the lights which should all be working. Zip tie any loose cables up behind the glovebox out the way.

The way mine works is if the car is unlocked the come on, if the car is locked they fade out, if the engine is started they fade out, if the engine is turned off they come on. If both interiror lights are turned on they come on, if the passenger reading light comes on so do the footwell, if the drivers reading light is turned on, the footwell lights don't come on.