Panda How to remove and replace electric tailgate handle

Guide Gallery Discussion
OK, the long-awaited 'How to' guide on replacing the tailgate handle for Panda's with the misbehaving electric release. (This guide will also let you locate the plug to temporarily disable the boot release when it starts playing up --follow steps 01 to 04 to remove trim, and disconnect plug in steps 07 and 08 only. Note that this will also disconnect the numberplate lights so is only a temporary fix.)

The part itself (the complete bootlid handle, which comes with numberplate lights and even the bulbs!) will be needed from the dealer. The new part is supplied in grey primer and will need spraying to suit before being fitted. Before spraying, the numberplate lights and the rubber seals on the back need removing and various parts (noteably the wiring and the microswitch itself) need masking off.

Before you start, make sure the whole car is unlocked and the key is with you outside the car.

Open the boot and locate and remove the two Allen screws (left) inside the internal handles (right, one each side, 5mm Allen key) 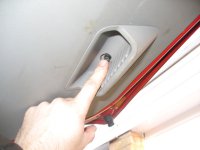 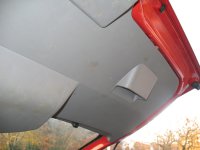 Starting at the centre by the boot catch, pull down hard on the plastic trim to release the plastic clips (left) and work around the edges both ways to release them all (right). There is one in the very centre too, by the wiper motor. Put the trim panel to one side. (If any of teh clips break they can be easily replaced - most car spares shops sell similar clips) 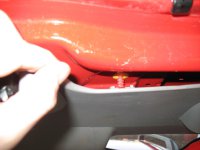 There are four 10mm nuts to be removed (two can be seen in the left pic- one above my finger and one to the right). Take care not to drop them as they unscrew (magnetic socket helps here - right pic) 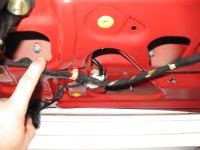 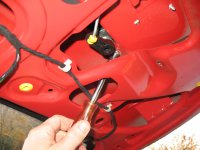 Twist the yellow retaining clip that secures the metal control rod to the key release through 90 degrees and release the rod. (Note: if you now shut the boot it can only be opened with the button on the remote -- best not to shut it!) 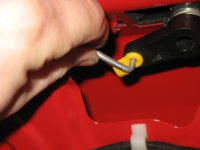 Now you need to unplug the wiring - find the white connector seen in the left pic. Release the plug (middle pic) by pressing the little latch that holds it (my thumbnail is on it) and slide away. Then insert a small flat screwdriver between the white plug left attached to the bootlid and the plastic retainer fitting (right pic) that holds it. The screwdriver will lift a retaining catch and the plug can then be slid off the retainer. 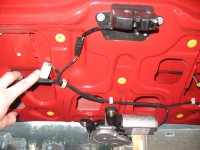 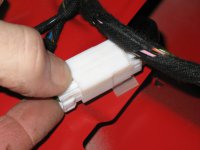 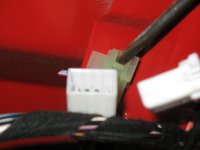 Now, with one hand holding the external handle, use your other hand to press the two plastic release clips (see pic -- they will be the colour of your car, so not necessarily red as here, and are roughly in line with the number plate lights). 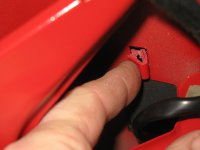 Lower the bootlid but don't shut it! (I left a coat lying across the catch to prevent it closing fully) Gently pull the handle away from the tailgate, easing the wiring and white plug though, and sliding to the right to pass the key release lever through. 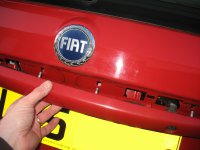 With the bootlid open, the rear shelf is an ideal place to remove the lock barrel. Prise away the C-clip holding it (left pic screwdriver being used to slide the C-clip. Note, this does not need to be fully removed, just slid out by about 4-5mm as in the photo). Put the key completely into the lock (the barrel cannot be removed without the key) and twist the key and pull to withdraw the barrel (right pic) 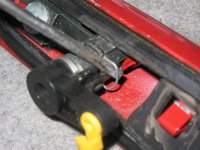 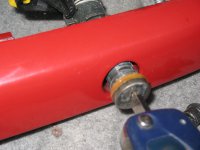 Fit the lock into the new handle, and then reverse the operations above to fit the new handle to the car. Remember to refit the metal control rod to the key release. When refitting the plastic trim panel, start by locating the two white clips in the corners nearest the rear window glass, then work around the edges. Finally, a good sharp thump in the centre will fix the middle clip.

The last pic shows the dirt in the old handle around the microswitch after 5 years on the road. It has been suggested in previous posts that maybe a spray of WD40 would prevent this -- I suspect that it would actually make it worse by allowing more dirt to stick. 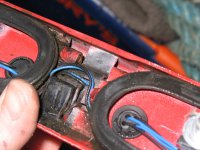 From start to end, including taking the photos, took less than half an hour.

(PS - if you find this useful, do remember to press the 'Thumbs up' button below)