Guide Gallery Discussion
This is a guide for fitting a sportex backbox to your fiat punto.

Common sportex choices for the punto are a 3” or a 4” box, like shown below. You can also get dual exit pipes ect.. but I will only be covering the installation of a single box. I went for the 3" which looks good on the punto. Wouldn't have gone for a 4", but it's down to personal taste at the end of the day. 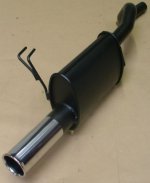 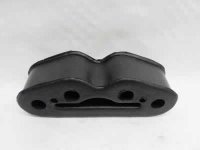 Exhaust sealant
Socket set (10mm I think, not 100%)
Hacksaw
Lubricant (Vaseline will do)

First thing you need to do is to jack the car up using the jack point, on the left hand side of the car (The side the exhaust is on) and put an axle stand underneath the axle / chasis. Place a couple of bricks in front of the front wheels to prevent it moving forward whilst you’re working under it. Keep the jack in place for added stability. Only need to the side the exhaust is on. No need to jackup / axle stand the other side, but you can do so if you wish. The one side gave more than enough room to move and work in.

Next thing to do is to remove the old mount. They’re hard to get off in one piece, so I chose to remove it with force (hacksaw) and replace it with a new one, which can be found on eBay and many other sites for a couple quid. This took me a little while to do, but stick at it. You can use any tool really, just be careful not to tear / break the heat shield on the underside of the car.

Next, depending on how old the exhaust is, you need to separate the backbox from the center pipe. Firstly you’ll need to take of the U-Clamp, which I think was with a 10mm socket. My exhaust was very rusty, so I took a hammer and gave it a load of bashes to try to free it. I used a flat head screwdriver and the hammer in the join between the two (backbox and center pipe) to free them up. Does take a lot of time, so be patient. Again, be careful with the underside of the car. If it’s free’d up a bit, go to the rear of the car and grab the backbox in your hands. Twist it round, from left to right. If you can’t twist it, you need to keep at it with the hammer / screwdriver. It should start to come free with the twisting motion, and soon after the backbox should have been separated from the center pipe.

Now you need to prepare for the new exhaust. I fitted the new exhaust mount first. The metal mount under the car is attached with a single bolt. Un-do this and gently remove the mount from the car. This will make it alot easier to attach the new rubber mount, which can be a massive pain to fit otherwise. Smear a bit of lubricant / Vaseline on the two large metal mounts to ease the mount on to it. Now fit this back onto the car, with the new mount now fitted.

Next take some of the exhaust sealant and smear it on the end of the center pipe, where the new backbox with fit over. Now take the new sportex backbox and ease the mounts on the box into the new rubber mount attached to the underside of the car. Use some lube on the exhaust mount to ease them in. Now ease the end of the sportex box over the center pipe join. Apply some more sealant to the seal and then re-apply the U-Clamp.

Now just take out the axle stand, remove the jack and you’re good to go and enjoy your new exhaust.

Despite what I’ve read, the sportex was easy to fit and a direct replacement for the stock exhaust. Putting the new one on took mere minutes.