Cinquecento/Seicento Changing the boot lock on a seicento (MK1)

To start the ball rolling just open the boot. The first thing to do is separate the latch & barrel mechanisms, simply unbolt the latch mech from the body with a spanner or socket the latch will drop down. 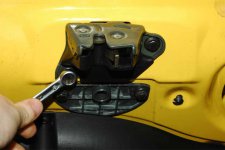 Now you can see what you're doing using the right hand access hole/handle of the boot door and support the piece of plastic joining the lock and latch mechs with a thumb or finger, 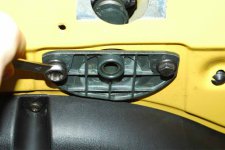 To remove the barrel mech unbolt the back plate.
View attachment 24298
It will almost drop out without any problems, however the arm that connects the barrel and lock mechs gets in the way, the easiest way to get it out is simply swing the arm round so that it's touching the barrel mech on the top side and pull the barrel mech down to the lower edge of the hole. 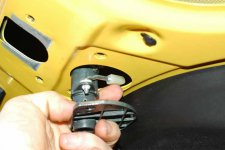 Now it's probablly a good idea to get that sponge weather seal off the plastic holder and put it some where safe.

Time to move into the warmth of inside, as the next bit is a little fiddly. If you're worried about the security of the car you can simply bolt the latch mech back on and it'll work fine, you'll just have to open the boot using the release latch next to the drivers seat.