Guide Gallery Discussion
This job is directed to those Panda's that have non-adjustable handbrake shoes. If your panda has adjustable shoes they should be adjusted in the first instance.

It couldn't be much simpler

Same rules apply when under a car ALWAYS use axle stands and have the car on level ground also chock the wheels that remain on the ground.

OK my panda was already in the air so whilst there decided to do this.

Over time the cable stretches and as it does so the handbrake lever is pulled further into the air when applied until the MOT man says enough is enough and fails it.

Set the handbrake to the first notch/ratchet on the lever the rear wheels when in the air should have just a little resistance, if they are spinning freely adjust the nuts shown below towards the front of the car till the rear wheels just start to show resistance. 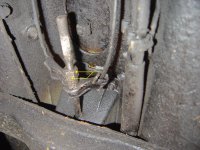 The nut at the front adjusts the cable, the other is a lock nut to prevent the adjusting nut from freeing itself.

Once the forward nut has been adjusted, whilst holding it in position with a 13mm spanner using a second 13mm spanner tighten the second nut to the first.