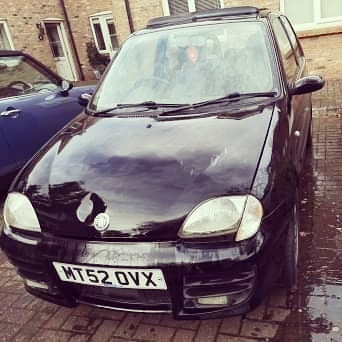 Seicento no. (who knows what) seicento,driving ban almost over

so ive been collecting parts,got me a palio intake bob thanks to a friend in Portugal,made some form of induction,soon to be changed and tweaked. got myself a nice steering wheel that came from a mk1 punto i need a new boss kit for,

in the mean time my partners little perdua caught alight on the forecourt,so as a quick sort got her a mpi sei with solei roof for now,turns out it has lancia dedra wheels and 1.2 mpi in it, not to forget big dent in the door i might try pull out so can open the window fully,but as a daily it will do tbh.

now moving onto my returning ownership of this seicento,now the ban is drawing much closer to ending.

I've owned this car before, it was a 1.2 swapped project that had been dry stored, I bought it with intention, made it look good, then decided to sell it, as i was pursuing a cinq sporting at the time.

it changed hands a good few times then a fellow friend came into it, after some parts where sold on, missing (all the good stuff) as i had got it from a forum member here.

the 1.2 in it had since blown so a 1.1 8v is back in its place, An ulster exhaust also so bumper exit looks appropiate. it has obtained a mcritch ecu too, i dont want a mad engine, this combo is jsut right imo.

currently it is undergoing some welding as its neglect showed, il be collecting the car prior to its fresh mot.

i know the bumpers are a different colour but im happy with them being black as im yet to decal the car in a rally esque style and more spotlights.

the originals where faded and blistered.

i plan to transfer some parts from one to another when time comes to make interior comfy as i will be covering some distance in the future for any meets or visits to friends and family as im a minimum 3 hours from anyone now. obligatory stickers for the FF will be in windows so if you do ever see me just wave!!
Share:
Facebook Twitter Reddit Pinterest Tumblr WhatsApp Email Share Link