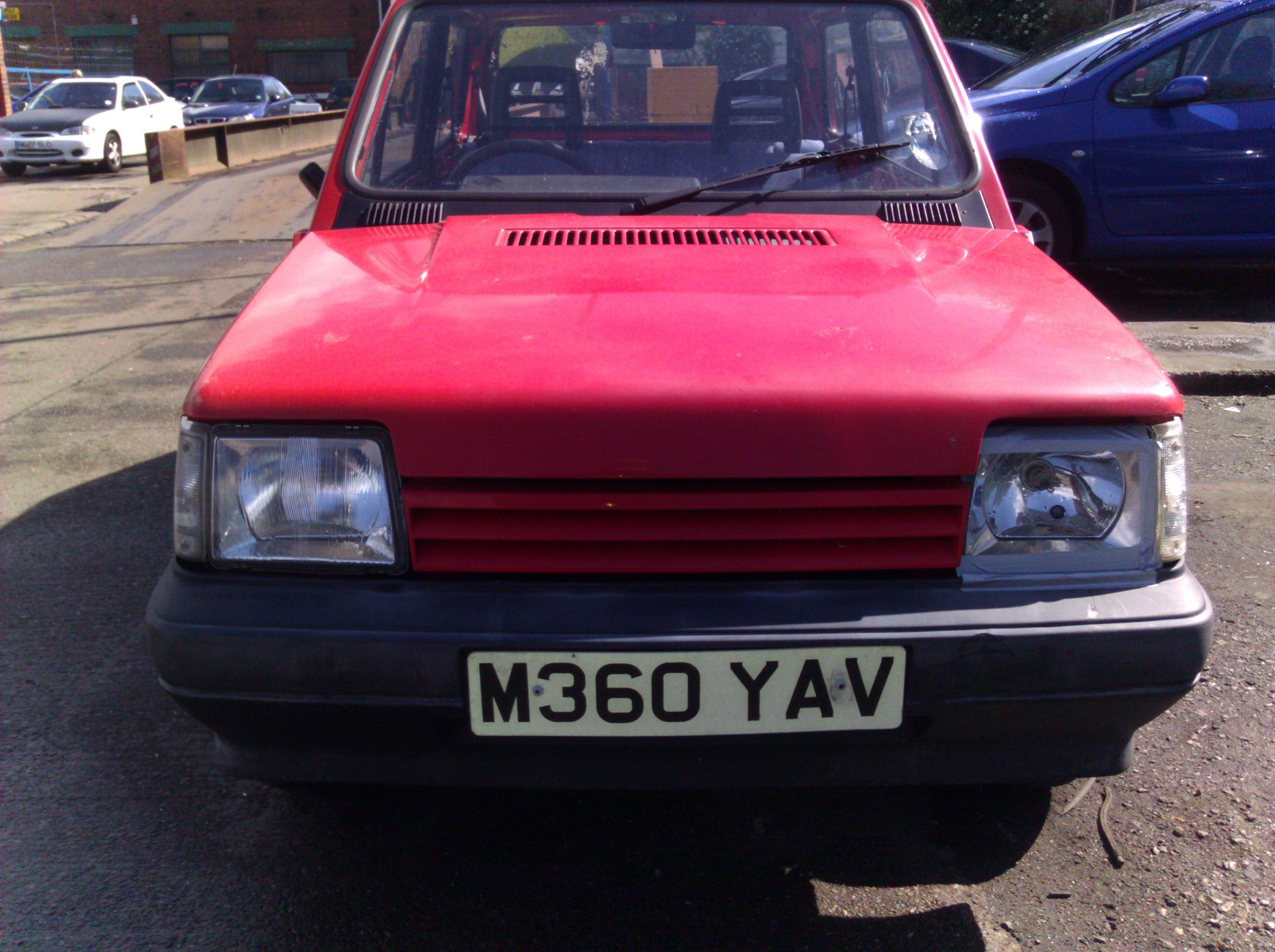 Well guys and girls. i could not help my self when i saw this come in to our local scrap yard.

1994 Marbella with 20,079 miles on the clock. looks like it has not gone around the clock as the interior and parts of the engine and gearbox still look like new.

heres some pictures of how i came to it at the scrap yard: here you can see the melted wire: Stand by for some more pictures, and of course online video logs via Youtube!


bit of a story of how i found the car:

A few days ago (on the 23rd) me and a friend, went around another friends house. i parked up and used his (the friend we went around to see's) car to go down to the scrap yard (he is not far from it).
we had a good walk around and my friend found some more sound proofing for Talon (as he is very good at this) and some other odd bits (which i was told i could have for free - best scrap yard ever!).
on leaving the scrap yard a lorry came down the driveway looking for a way through to a business place. we told the lorry driver to follow us to where he needed to go as my friend knew the way to it.

on the way we passed a place i use to work at. as we went past the friend i brought with me noticed a seat marbella parked up in one of the car park bays. i didn't see much of it and only the back of the car, but noted the unusual reg number.
anyway. a day or so later (on the 26th) the same friend who spotted the car went to the same scrap yard we visited on the 23rd to get some bits for his car, and what car just so happens to be sat in the row of cars ready to have all of there vital fluids / environmental hazards removed? the little seat marbella. so he gets on the phone and rings me up.

I then ring up the scrap yard and ask them to hold the car and not to put it through the scrapping process as i would like to know if they would sell it.
they told me that it came in late on the 24th and i was lucky to catch it just in time. they gave me a price of £350 which was quite a bit for me so i was not really that bothered. my friend told me it was in good condition with no rust.
so i was just going to go down after they processed it for scrap as i wanted the rust free doors off it. (i know Sisley owners and Marbella doors.. )

anyway. this morning (27th) i got a phone call from the scrap yard.
"you were interested in the marbella? i've stuck it to one side for you if you want to come down and have a look at it..."

well i could not resist.. even if it was just to see how good them doors were.. (ohhh those marbella doors..:yum:). i drove right up to the gates and parked up. walked in and was greeted by this happy.. yet sad looking little red marbella.

well i looked around it found i could not get the bonnet open, would not pop up when i tried to open it. i did in the end get it open and soon spotted the "causes of death fault".
a really melted wire leading from the alternator that should of been connected to the starter motor, it somehow worked free and arced to the engine block causing the alternator to lock up and burn the diode bridge out. it also had short run issues like quite a bit of water logged oil in the oil filler (these engines get that, its normal), a smashed front headlight, on the inside the drivers side seat belt has been worn by something causing it to fray, and it is also missing a wing mirror.

inside the car was a notice saying that the car will not start and it was to be towed for scrap at 13:00 on the 24/04/13. i also found some paperwork with the previous owners name and address. (i was later able to track down the previous owner using this and retrieve the super rare parcel shelf! )

well despite the niggles that it had.. i just could not help myself... the car was rust free, solid as the first day it was put together.
so i end up talking to the guy on the weigh bridge and he said that i could take it for £325... delivered to my home address.:slayer:

it just so happens that my brother is taking driving lessons and i think that it would make the perfect car to welcome him into the life of driving a car.
keep this hush hush.. he does not know yet that this will be his car.

Edits:
As of 17/08/2013 the car is now back on the road after its scrap yard rescue!!! High Five!
soon after the car was put in my brothers name as it made the insurance go down a lot.

Edit: This is a photo of the marbella when my brother sold it: