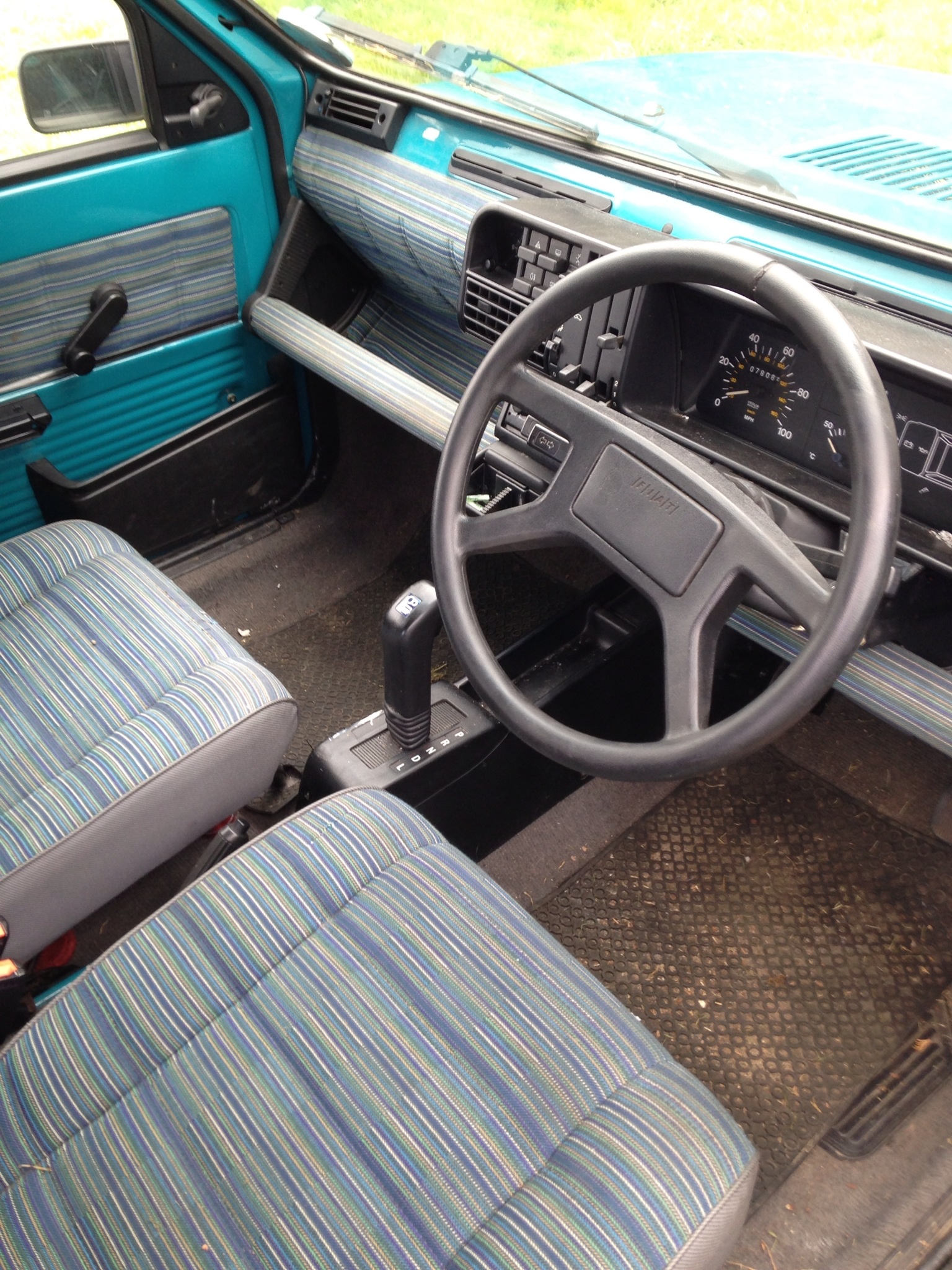 Panda (Classic) Hal, the turquoise Selecta: Once more unto the breach, dear friends!

Named after [ame="http://en.wikipedia.org/wiki/Henry_V_of_England"]King Henry V[/ame] (Prince Hal, for those, like me, who are Shakespeare addicts...) -- not the computer in Kubrick's masterpiece, 2001: A Space Odyssey -- Hal (see the number plate...), I'm hoping, is the Panda of my dreams. For someone who said he wasn't going to buy any Pandas, this year -- but I would buy either a Selecta or a 4x4, next year... -- I'm doing pretty well....

No new photos, beyond those in this how-on-earth-did-I-end-up-with-a-third-Panda thread: as there's nothing new to show, really; and I was too tired to take photos of the engine bay... -- so apologies for the disappointment. Hal does feature a full complement of tools, under/around the spare, though, I can reveal; as well as a stonking new battery; and a very slow oil leak (possibly from the rocker cover...). As you'll have seen from the Auction Watch thread, I had to catch a couple of trains to get to Hal; followed by a gentle walk through the suburbs of Birmingham (where Hal seems to have spent all of his life...). The guy selling the car then took me to the Post Office to get a new tax disc, and to the local factors, to get the battery. (What a star...!) He even wanted to make sure that all the fluid levels, etc. were okay, before I set off...! :worship:

It comes with most of its old MOTs -- showing the following mileage progression...
...so it's been in pretty constant use; but nothing too strenuous!

It also comes with two copies of the Owner Handbook -- as did Pippin -- both identical: neither mentioning either the 1108 cc engine* I'm fairly convinced it has (see below); nor the injection light, on the dash (that does work... -- also see below...). Anyhoo: never having driven a Selecta in anger, before, I have the following comments:
I'm therefore hoping that this turns out to be the bargain of the century... -- but we shall let VmanC be the judge of that! :slayer:

Overall, I'm incredibly chuffed. The bodywork, sills, etc., have obviously been fettled at some point; but it feels solid, generally. I just need -- with Vernon's help, probably -- to sort out the aftermarket washer jets; although I think I shall leave the aerial where it is, for the moment.

Immediate plans include changing the engine and gearbox oils; coolant, air filter, etc.. I shall then, hopefully, give Hal a darned good clean, inside and out; before taking him to Vernon's.... Eventually, I may source a new HU, and add in some front speakers. I'm quite tempted to leave the slight variations in colour (346: Turchese, I believe...) as they are, though: as this will be my go-to Panda (with Betty being for special occasions; and Pippin, obviously, going to the homewardette...) -- and I quite like what I think of as the 'patina of honesty'...!